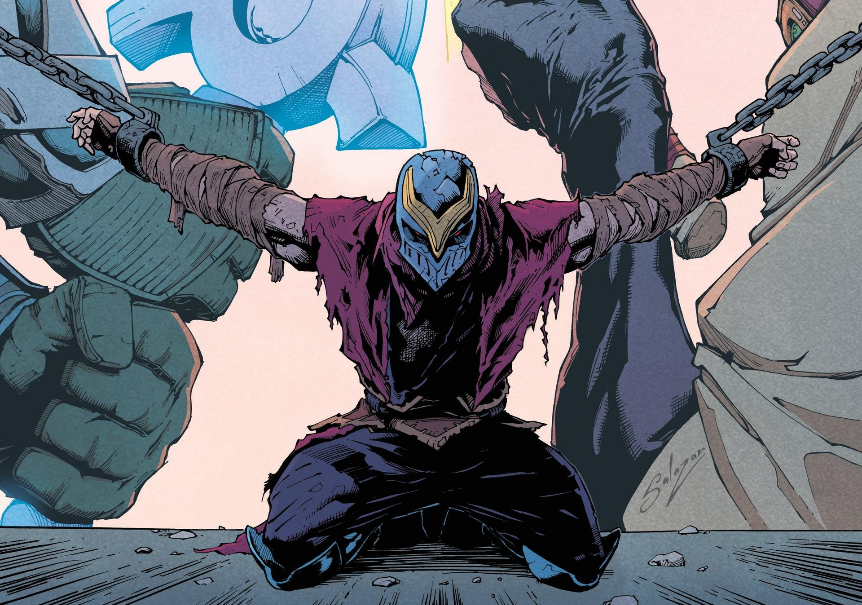 Zed and Shen team up to search for Jhin in Zed issue five, but not without a fair share of arguing and fighting.

In the previous issue, Zed allowed himself to be beaten and captured by his old friend. The Master of Shadows continues to beg for Shen’s help in taking out Khada Jhin, despite it going against the Kinkou’s ideals of a balance. But before Shen is willing to do anything with him, he needs to know why Zed killed his father.

Fans looking to avoid any spoilers can read Zed issue five for themselves on the Universe page.

The issue kicks off with Zed captured at the hands of his former best friend, Shen. The only thing the Eye of Twilight wants from the Master of Shadows is to know why he killed his father. It’s unfathomable to Shen why Zed would murder the adoptive father who gave him everything. But Zed’s motives transcend those of love and loyalty.

“The Kinkou’s mission, to protect the balance between the spirits and men, would be tainted by war,” Zed said. “The Kinkou would become no better than a warrior clan.”

With foreign invaders threatening their land, a new order had to be created. But if the Kinkou got involved in a war, they would turn into mercenaries and assassins. Zed killed his master to preserve the noble Kinkou order and give them a new enemy—himself.

Shen, satisfied with Zed’s truthful response, releases the Master of Shadows so that the two can band together and find Jhin. But there’s one condition—the virtuoso must be captured, not killed.

Meanwhile, Kayn is letting his new leadership role over Zed’s band of assassins get to his head. The Shadow Reaper seeks to disturb the band’s patron even though Zed explicitly forbids it. When confronted by one of the band members, Kayn lifts him up from his throat and asks him “Who is your master?”

Under Kayn’s leadership, things are going to change.

On the Piltover front, Akali is seeking to capture Jhin herself. The young ninja asks, bribes, and threatens locals for any information on the theatrical psychopath before being led to a theater in Mistfloor. But Akali’s hardheadedness leads her straight into one of Jhin’s traps.

The virtuoso tells Akali that she’s a “leaf in a storm” that’s “seeking transformation.”

Despite Akali’s best efforts to hide in her shroud, Jhin is one step ahead. He already set up fans to push the smoke away, making Akali an easy target.

Though Shen and Zed finally arrive to save Akali, the young ninja has already fallen to Jhin’s hands. And the unhinged menace promises to give the two a “killer show.”

The events of the first five issues will crescendo in the next comic when Zed and Shen finally take on Jhin.