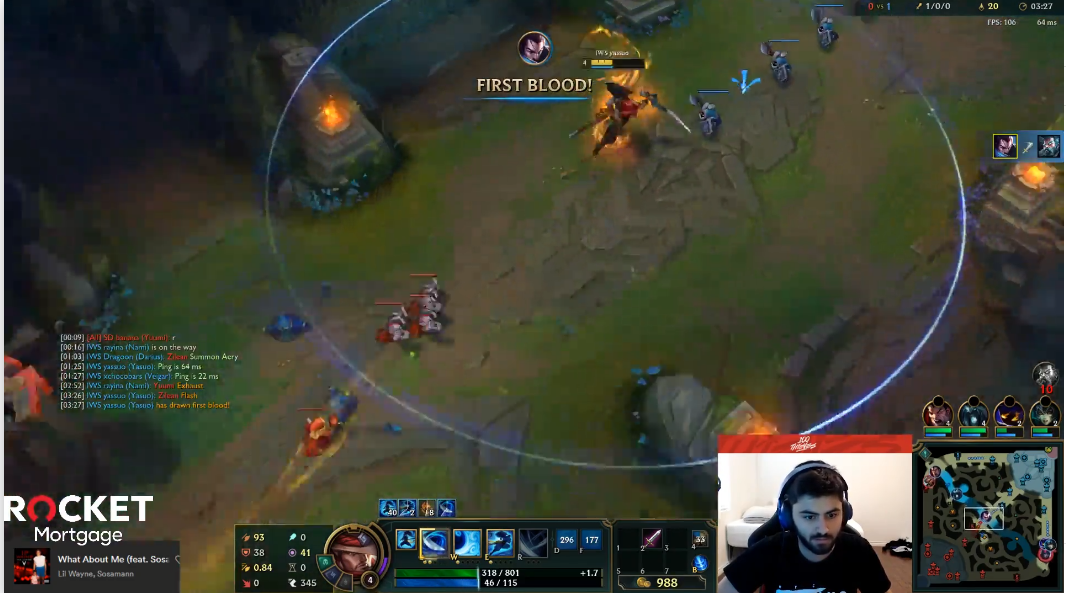 During the first day of the Twitch Rivals League of Legends Streamer Showdown yesterday, a play from mid laner Moe “Yassuo” Abdalrhman had his teammates thinking they actually had Lee “Faker” Sang-hyeok on their squad.

In game four of the round robin group stage action, Yassuo’s team, IWILLSIMP, battled it out against fellow undefeated squad Sneaky Dogs, led by Zachary “Sneaky” Scuderi, to see who would finish on top for the day. An early play by Yassuo foreshadowed his team jumping on his back and riding along for the win.

Yassuo pulled out his namesake for the final match, laning up against frostprime’s Zilean. Just over three minutes into the game, Yassuo fled a potential gank by using his E, Sweeping Blade, to jump through the jungle wall into the raptor camp. That was when Yassuo reached deep within himself to pull out his inner Faker and go for the outplay. Frostprime moved to the bottom side of the lane when clearing the minion wave, unknowingly leading Yassuo into the play he needed.

In a split second, Yassuo used Sweeping Blade on the jungle camp to go through and clear the jungle wall. He then used flash and followed it up with his Q, Steel Tempest, his ignite, an auto attack, and another Sweeping Blade. As he walked away, the ignite ticked away at frostprime’s health off-screen and the announcer declared that Yassuo picked up first blood.

His team couldn’t hold back their surprise over the clear outplay. One teammate said, “You are actually Faker.” Whether it was pure skill or luck for the popular streamer, in classic Yassuo fashion, he didn’t remain humble over the move.

“I just shit on him,” Yassuo said while laughing.

That wasn’t the only highlight of the game for Yassuo, though. He went on to finish 10/0/4 while leading his team to the victory in under 26 minutes, helping his squad finish day one on top of Group A.