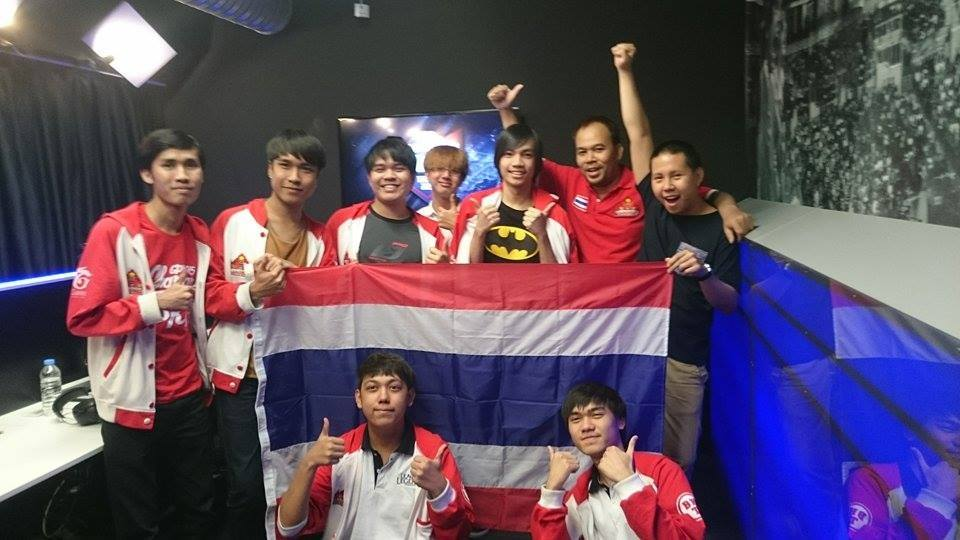 When one thinks of Thailand one will usually think of sun, tourism, buddhism and possibly even the origin of Red Bull energy drink. However, e-sport in Thailand is an evergrowing phenomenon and with the Bangkok Titans securing a spot for worlds a new chapter has been written in Thai e-sports, and the population will be hoping they can do Thailand proud. But who are these Titans? The purpose of this piece is to introduce you to the Bangkok Titans and hopefully after worlds you will remember the Titans.

Today the Bangkok Titans are Thailands undisputed champions, crushing everything in their road domestically. But it wasn´t  always like this.The Titans had formed in 2012 to compete for the first ever Garena Premier League season. The roster swapped around alot but the main five players consisted of  Jeno, Leah, MED, Nvm and Xeres. None of which are on the roster today. Before the start of the GPL, Thailand hosted a small regional tournament which BKT lost to Blackbean, Thailands other top team at this point. The loss against Blackbean was repeated in the IPL5 Thailand qualifier.

The very first GPL season was dominated by an 38-2 TPA, but even more remarkable, the Bangkok Titans managed to go 0-31 before picking up their first win against the other bottom team Manila Eagles. The Titans checked out of the first GPL season with a crushing 4-36 record and dead last.

The Titans of Thailand

Licking their wound from the soulcrushing 4-36 GPL season, the Titans went into the newly formed LCS pro league Thailand. A tournament consisting of a monthly tourmanet in May and June culminating in the pro league championship. In Both May and June the BKT came in second to Flashdive(later MiTH Flashdive), an up and coming team featuring the 3 later BKT players G4, Lloyd and 007x. BKT reedemed themselves at the grand finals and won a hard fought 3-2 win over Flashdive and secured themselves a spot at the SEA regionals. They lost in the SEA regionals to later worlds participant Mineski.

Having won the first real LCS pro league in Thailand, BKT found themselves on top of the world entering the Thailand grand championship 2013(seperate from the LCS one). After placing first in the groups they found themselves in the winner brackets, but things was crumbling for the titans. First they lost a surprising winner bracket match against fairly unknown Infinite, then after battling their way to the finals they suffered a crushing 0-3 defeat at the hands of their rivals MiTH Flashdive.

Going into the 2014 Thai pro league winter, the BKT had picked up Lloyd from Flashdive and Warlock from Blackbean. The changes saw the Titans blast through and secure first place in a 3-0 win over Flashdive in the finals. After the winter season the BKT continued to strengthen their squad. They once again picked up 007x(who had rejoined flashdive) and G4 also of Flashdive. The Titans now consisted of 4 of the 5 members(The 5th player, Moss, joined April 2015) who make up the current roster, but even more importantly they had crippled Flashdive completely.  With the new roster the BKT won another 5 consecutive Thai championships, dropping only one game in 5 best of fives(6 if you count the win mentioned before roster overhaul). They had finally reached their goal as the undisputed champions of Thailand. A team of Titans!

Where the wild things are- GPL and the wild card

Until the roster overhaul , the BKT found themselves constantly in the bottom 3 of the GPL. But with the new roster BKT finally managed to see playoffs. Granted they secured the last possible playoff spot, and they lost in the playoffs 0-3 to finalists AHQ. But still, it was a step in the right direction for the Titans. The real blessing for the Titans came in the form of the GPL splitups which saw Taiwan, Hong Kong and Macau create their own league in the form of LMS. With the creation of LMS most strong teams had been removed from the GPL, leaving the Titans every chance to taste regional succes.  In the first new GPL season the Titans did indeed find themselves in the final, against Saigon Jokers who had attended S2 worlds.  Bangkok Titans lost 0-3 and their dreams of a spot at the MSI qualifier tournament had vanished, for now. Saigon Jokers ran in to visa problems and the Titans found themselves in Turkey duking it out for a spot at MSI. This is also the first time many western fans watched the BKT in action.

In Turkey BKT started out strong with aggressive chaotic play going 5-1 in the groups and looking like a favorite. Unfortunately they could not deliver when it mattered and suffered a 0-3 defeat to home team and later winners Besiktas. If MSI showed one thing, it is that BKT is a weaker version than Alliance/Elements. When they play their best they are in my opinion one of the strongest wild card teams in the wild card tournaments, their aggressive play and the constant need to fight makes BKT a very entertaining team to watch. However it is also their downfall. When BKT is in the zone it looks merciless and impressive, but when they aint…well thats when it backfires and it makes them fall even further behind. In other words, they are not too strong at adapting to their situation. Fr good measure i should add that the comperance to Alliance was in terms of stability, not level of entertainment.

BKT came back to GPL with a vengeance, they crushed the Saigon Jokers 3-0 in the summer split followed by a 3-1 win in the SEA regional finals, earning them yet another trip to Turkey to play for a wild card spot at worlds.  Titans lost their opening match against the ever hyped Chiefs of Oceania but picked up the slack with a win against Dark passage. Then disaster hit as they succumbed to a defeat to the one true wild card team of Japan, Detonation FocusMe. On Day 2 BKT once again lost to Chiefs and found themselves 1-3 in groups. But with wins over DP and Det.fm they managed to advance to the final against Chiefs. Chiefs had been hyped as favorites, something i did not understand. A 100% Titan team will beat a 100% Chiefs team in my humble opinion. With a worlds ticket on the line , the Titans came out swinging and beat the Chiefs 3-1. Thailand was going to worlds!

At worlds Bangkok Titans find themselves in Group C with SKT, EDG and H2k. Now realistically they should go 0-6, but i think they will grab one game of H2K. Bangkok Titans have 2 chances to strike lucky with their aggressive style against a recently lackluster H2k. If H2K give the Titans a finger, they will take the whole arm. People did not believe in Kabum, yet the gap between BKT and H2K is smaller than the gap between Kabum and Alliance. The chance of H2K getting Kabumed is very real, and i wouldnt be all to surprised if H2K throws a game to the Titans.

Nontheless i am sure that just like Mineski and GamingGear before them, Bangkok Titans will become a fan favorite. Their playstyle opens up for some of the most actionpacked games and i personally wouldnt miss one of their games, it will be chaotic and it will be a bloodbath, but it will also be massively entertaining.

When worlds is over, you WILL remember the Titans!