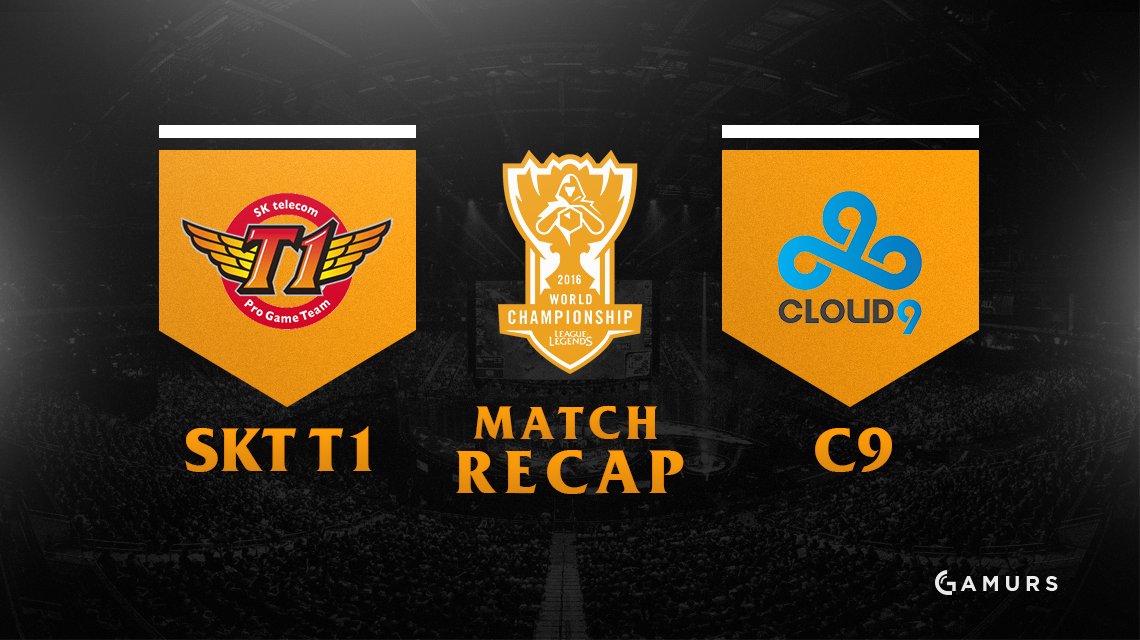 The seventh match in the League of Legends World Championships for Group B just concluded. This match featured SK Telecom T1 of the LCK vs. Cloud9 of the NA LCS.

We kicked off our first game of Group B with Korean No. 2 seed SKT and NA LCS No. 3 seed C9 in this tight group. With C9 Impact facing his former team, all eyes were on the top lane moving into the first game of the second day.

C9 would start aggressively with a short invade towards the top to place some ward coverage before dispersing back to their lanes. C9 Jensen would be the first casualty as aggressive play gave SKT first blood.

The game would progress slowly afterwards, with SKT taking a slight constant gold lead as we got into the mid-game and neither team really wanted to commit to a play.

SKT Benji made his presence known on the Elise, able to kill former teammate C9 Impact in the top to secure the first tower at the 15-minute mark. This opened up a dominant display from SKT, as C9 Jensen was unable to live up to his Summer Split potential and constantly died. SKT looked to capitalise on its small lead and extend it.

Cloud9 would find its first kill at the 20-minute mark, but it wouldn’t stop the rampant SKT get themselves a 7k gold lead.

After securing more kills and an uncontested Baron, SKT practically made C9 drop off from the game entirely.

After a last ditch attempt from C9 to try and get an ace, SKT would capitalise even after losing a few of its members to be able to take an inner nexus turret and further increase their gold lead to 15k just before the 30-minute mark.

SKT were able to close the game and take every single one of C9’s towers and inhibitors on the way to the nexus to secure their first win and go on top of the group.

What did you think about the action in today’s Worlds action? Let us know by commenting below or tweeting us @GAMURScom.