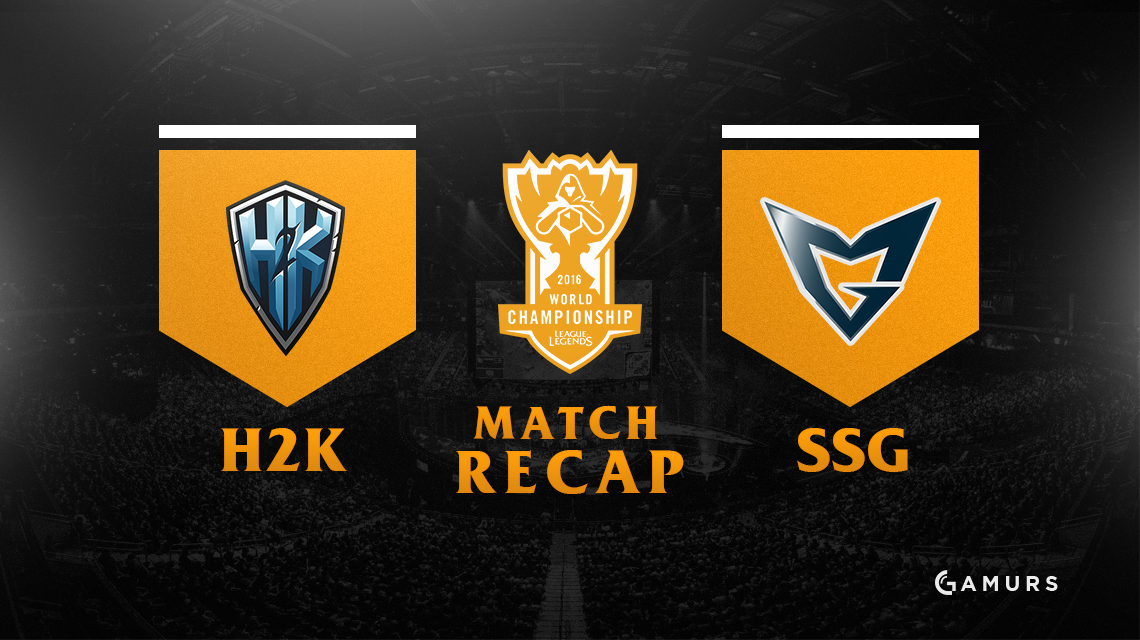 The game started off very early with the first kill happening before the one minute mark. Both teams sent their duo lanes and jungler to the bottom lane brush, where both sides wanted to camp. H2k got to lane first, however, and when Kang “Ambition” Chan-yong face-checked the brush, he was taken down. Marcin “Jankos” Jankowski ganked the bottom lane again and picked up another kill for H2k, but Ambition was quick to pick up two kills, both on Yoo “Ryu” Sang-ook, and equalized the gold lead. At 11 minutes, SSG was able to secure the first dragon of the game, a mountain drake.

SSG also secured the first tower and held about a 1.8k gold lead at 15 minutes, even though H2k led the kill score 4-3. While H2k focused on top lane to find a kill, Ambition once again took dragon while H2k was busy on the other side of the map. Their second dragon was yet another mountain drake.

The first team fight of the game went in favor of H2k, who lost two members and took down four members of SSG. While this was happening, SSG’s Ekko was able to take the top tower, but it was traded by H2k, claiming the mid lane tier one. After the fight, H2k was still down in gold, but held onto the kill lead 9-5.

A Baron fight was misplayed by H2k and SSG capitalized, forcing the Europeans off the objective. From there, the game slowed down, with Lee “CuVee” Seong-jae split pushing for most of the game and applying a ton of pressure on H2k. SSG found an infernal dragon and a Baron, and used them to break down the H2k base and take game one.

Game two kicked off a lot later than game one, with no crazy kills early on. First blood was secured by Jankos, who made a visit to the top lane, and with the help of Odoamne, took down CuVee.

Like game one, though, Samsung Galaxy’s first kill was on Ryu, who got caught getting a little too close to the mid lane brush. However, soon after that, Ryu was able to turn things around and find a kill, but left without summoners, SSG earned an easy kill in response for Lee “Crown” Min-ho, his third of the game.

Just a few moments later, H2k secured first turret gold, putting them in the lead by about 1k at 12 minutes. H2k then secured two kills in the bottom lane after a failed Jhin ulitmate and moved to take the infernal drake afterwards. They then looked to the mid lane, where they got the turret down to 99 HP before they were forced back by another Jhin ultimate. From there, SSG flexed their muscles and proved their strength in the mid game, extending their gold lead by finding a few more kills, as CuVee continued to shove the top lane.

Just after the 20 minute mark, SSG took an uncontested Baron without H2k even knowing about it, which further extended their gold lead to about 4k. Just like in game one, Samsung moved around the map with great confidence, taking turrets as they pleased and putting H2k in a chokehold as they slowly dismantled parts of the Rift.

Soon after that, SSG won a three-for-one team fight in the Baron pit at the 29-minute mark and secured Baron to extend their gold lead to roughly 9k. Moments later, one more push down the bottom lane was all she wrote for game two, as SSG earned an ace and ran right towards the Nexus, ending the game in 34 minutes.

Samsung Galaxy looked to end the series right here and found first blood, thanks to a top lane gank in which Ambition and CuVee took down Odoamne, who was sitting under turret. In response, Jo “Core JJ” Yong-in was looking to roam down to the bottom lane, but was met by Jankos and one other member of H2k who were sitting in the tri-bush. A cocoon was all H2k needed to secure the kill, then they extended the play by diving onto the Ezreal, where it was a one-for-one under the turret.

From that point on to well into the mid game, it was all scrappy plays with virtually no well organized team fights. In this time, though, SSG was able to extend their gold lead to about 5k by taking a lead in the kill column, 5-3, and taking down three towers compared to H2k’s one.

Samsung Galaxy controlled all objectives and took their second dragon, the ocean drake, at about 19 minutes, adding onto their earlier cloud drake. Shortly after taking dragon number two, Ryu hid in the fog of war and attempted to pick off a SSG player who was weak, but Crown quickly turned the fight on Ryu in the bottom lane, making him 1/3/0.

Pink wards played a huge role in this game. At one point before Baron was taken by SSG, not a single H2k player had a pink ward, while four out of five SSG players did. Vision control was one of the reasons why SSG completely dominated the map and objective control.

A 21 minute Baron helped SSG break into the H2k base, getting all the way to the Nexus towers before backing off and moving to the infernal dragon, securing their third dragon of the game. From there, it took just one more push for Samsung Galaxy to complete the sweep and punch their ticket to the grand finals in Los Angeles.

What were your thoughts on this match? Let us know by commenting below or tweeting us @GAMURScom.