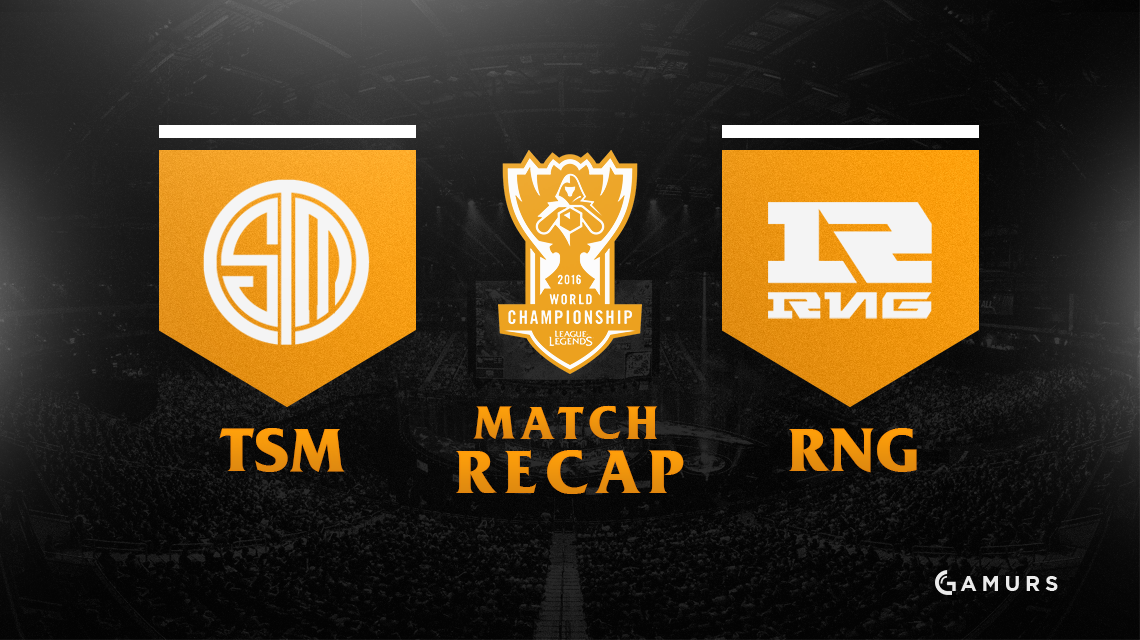 The last game of Day One pitted the NA dream Team SoloMid against LPL’s own Royal Never Give Up. In San Francisco at the Bill Graham Auditorium, on American soil, you can hear the TSM chants non-stop leading up to game time. TSM has the hope of NA on their backs heading into game as RNG plans to destroy the NA dream.

After a remake involving a bug with Aurelion Sol, the teams went back into champ select with knowledge of what each team was capable of picking.

With Svenskeren being banned out both times, he had to pick himself a strong jungler in the beginning of the phase to prevent himself being put on a jungler he isn’t comfortable with. TSM went from a pick comp to a wombo-combo comp while RNG stayed with the strategy to stay with a engage comp.

Here is what both teams picked and banned:

Right off the bat, Mlxg ganked mid and almost killed Bjergsen, but luckily Svenskeren was nearby and managed to save him. You could tell RNG felt robbed, so Mata met Mlxg and Xiaohu at Svenskeren’s raptor camp and took him out for first blood going to Mlxg.

With TSM having a strong late game composition, they made it back into lane and try to farm their way through. RNG tried to make plays and catch out TSM members here and there, but TSM played it safe.

Svenskeren made his way into Mlxg’s jungle set on getting revenge for first blood. He found him and lands two very well aimed Q’s to secure TSM’s first kill of the game. Meanwhile botlane, Doublelift outplayed Mata by flashing his Headbutt to turn on them and force Mata’s ult and flash, Loopers TP and Uzi’s ult.

TSM used this advantage in abilities to jump onto Looper top lane for Svenskeren’s second kill. TSM pushed towards dragon to secure an Ocean Drake, then Svenskeren predicted a flash from Xiaohu for his third kill.

RNG retaliated by taking down Doublelift then Biofrost just a minute later. The game was tied 3-3 with TSM only being ahead 1k gold. The next few minutes were both teams trying to gain vision control when RNG take a huge fight where they caught out three of TSM’s members resulting in a four-for-one in favor of RNG.

TSM regroup and take another dragon, this time a Mountain Drake. TSM now aimed to retake vision control in order to apply their dragon advantage and gain control of the game.

After RNG picked off Bjergsen in Cassiopeia W, they make their way into TSM’s jungle where they get a little greedy and Mata fell through his ultimate to Doublelift. Despite the score being 5-8 in RNG’s favor, TSM is only behind 300 gold due to Doublelift and Bjergsen out-farming their opponent.

The game reset again and RNG made a push to secure mid tower, but TSM reacted quickly and took the tier two bot tower for a trade in their favor. At this point, the gold is dead even, but TSM is playing in a reactive manner which doesn’t always pan out.

Using their engagement comp, RNG flanked behind TSM with Mata with a nasty pulverize on three members into a Rumble ultimate to instantly win the fight. Bjergsen and Svenskeren are forced to retreat while RNG secured Baron and pushed their advantage towards bot to kill Hauntzer again on his respawn.

At this point, RNG looked very solid and turn their team comp into a pick comp and find one kill after another, leaving TSM no room to make it back into the game. A triple kill for Uzi inside TSM’s base spells death for TSM.