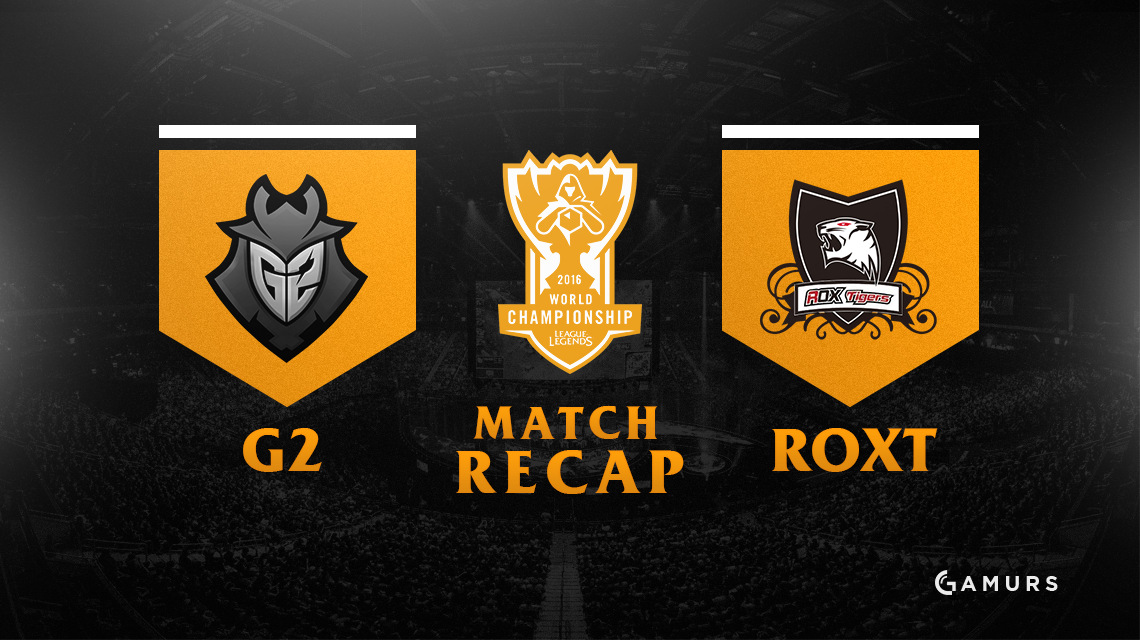 A recap of the match from day five of Worlds 2016 between G2 Esports of the EU LCS and ROX Tigers of the LCK.

Today is absolutely all or nothing for G2 Esports. Facing elimination from their first miserable Worlds outing, G2 were looking to pull off a miracle. First off, the squad had to take on the Korean champions.

G2 looked strong, capitalising on the top lane to gain an easy first blood to take a small gold lead in the early stages of the map. However, G2 would misplay in the mid lane after over aggression and give ROX a chance to bring the game level once again.

Another misplay in the mid lane after a successful G2 gank would gift a one-for-one to ROX, which did force a ROX teleport. There were a few scary moments for both teams as they tried to make a play until G2 were able to steal a dragon at the 13-minute mark.

ROX, though, would be able to capitalise on the bot-lane by taking the first tower and securing two kills as well, followed by a second tower a few seconds later with G2 not respecting ROX at all.

G2 secured the second dragon, with both teams trading an outer turret each and G2 looking to claw back from the 2,000 gold lead that ROX had gained at the 20-minute mark. Another team fight in the mid lane choke point gave ROX a bigger lead, capitalising on G2’s greed to take two towers in the process. This was when ROX took absolute control of the match.

The match would continue with nerves high on the G2 side, trying to wait for ROX to make a mistake, but it was ROX who capitalized on G2 being too split up. ROX took a kill and another tower as they headed towards Baronand took the objective.

G2, unable to make the most of their situation, made errors with their team split and were unable to get any objectives as ROX pushed them away.

ROX pushed on the base, taking a second inhibitor turret and two inhibitors in the process. the Korean squad backed out cleanly with all five members alive and took another dragon to claim another safety net with a 6,000 gold lead to sit on with two of G2’s inhibitors down.

ROX looked for their final push and took the third inhibitor, pushing for the win and knocking G2 out of the tournament.