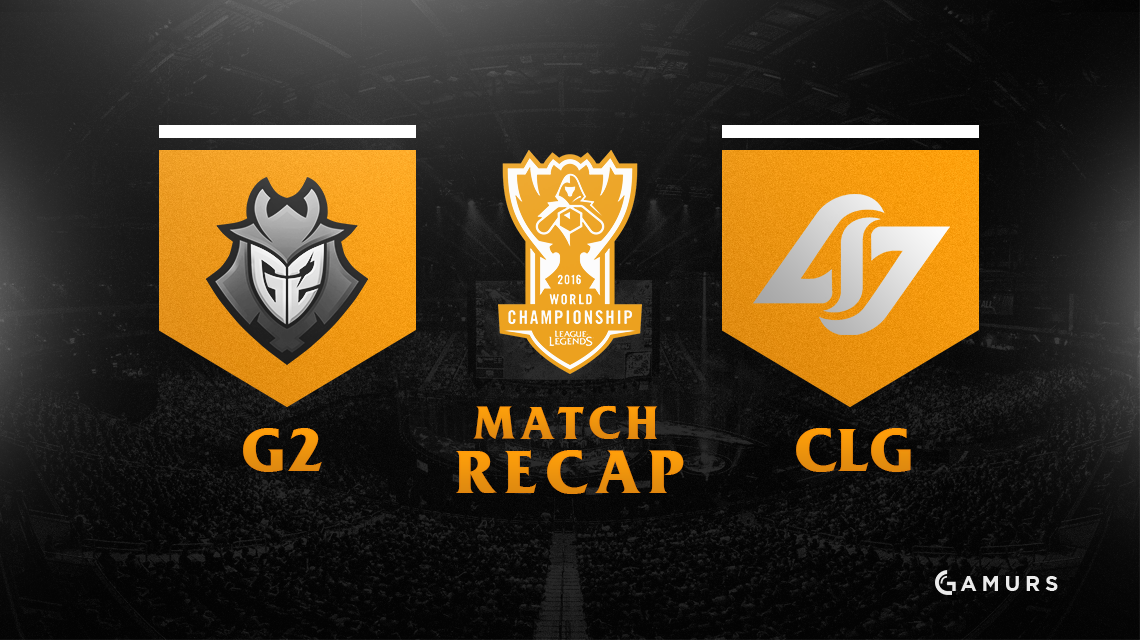 The first match in the League of Legends World Championships for Group A just concluded. This match featured G2 Esports of the EU LCS vs. Counter Logic Gaming of the NA LCS.

Worlds 2016 has officially begun. After an impressive opening ceremony, both teams sat down to begin their quest to greatness and to cement their chances moving forward in this difficult group with a much-needed win to stake their claim for the championship crown.

Could we kick off Worlds any other way? A good old EU vs. NA grudge match on the international stage. With ROX Tigers still to come for both teams, this could very much be the deciding game for that precious qualifying spot in the group.

First bans of the competition would be Aurelion Sol, Nidalee, Rek’sai, Sivir, Karma and Soraka.

G2 would then pick up Elise, Jayce, Syndra, Jhin and Braum.

CLG would pick up a surprising Nami followed by Caitlyn, Vladimir, Poppy and Olaf to send us onto Summoners Rift.

After a strong start for CLG, applying pressure down upon G2, there was a sudden pause in the game to stall the hype due to audio issues for CLG. The game would continue after a long wait, and a double team from G2 in the top lane would give Jayce first blood over CLG’s Poppy. However, Poppy would force a flash up top afterwards, with Jayce having a small scare from an aggressive Poppy play.

After a tower dive bottom took out Jhin, CLG would find themselves gaining three kills to G2’s one after a few misplays to level the gold difference at the 10-minute mark.

After what appeared like a comeback from G2, CLG would counter attack and dominate a fragile looking G2 side. Olaf once again came up big to carry the team forward and take out Braum and Elise, as well as securing the third tower of the game to increase CLG’s gold lead.

CLG continued to clean up towers and dragons and continued to slowly increase their gold lead throughout the game. A few intense team fights would show up in the mid-game, but no one was able to capitalise or register a kill. CLG was building on their vision control over G2 until CLG was able to take Baron after an impressive display of zoning control to keep G2 away from even contesting them just under 25 minutes. G2 was able to take two turrets to try and keep the gold difference around the same level, but CLG was still slightly ahead.

The execution of this CLG side was immense, choking off G2 for the majority of the late game to have complete dragon control to try and force G2 to be the one to make the mistakes. G2 once again was able to force CLG down to low health, but they were unable to register kills to get precious gold from them.

Then finally, an ace was secured and CLG ran down the mid lane in order to secure the first win of Worlds 2016 over the casters favourites G2.

What did you think about the action in today’s Worlds action? Let us know by commenting below or tweeting us @GAMURScom.