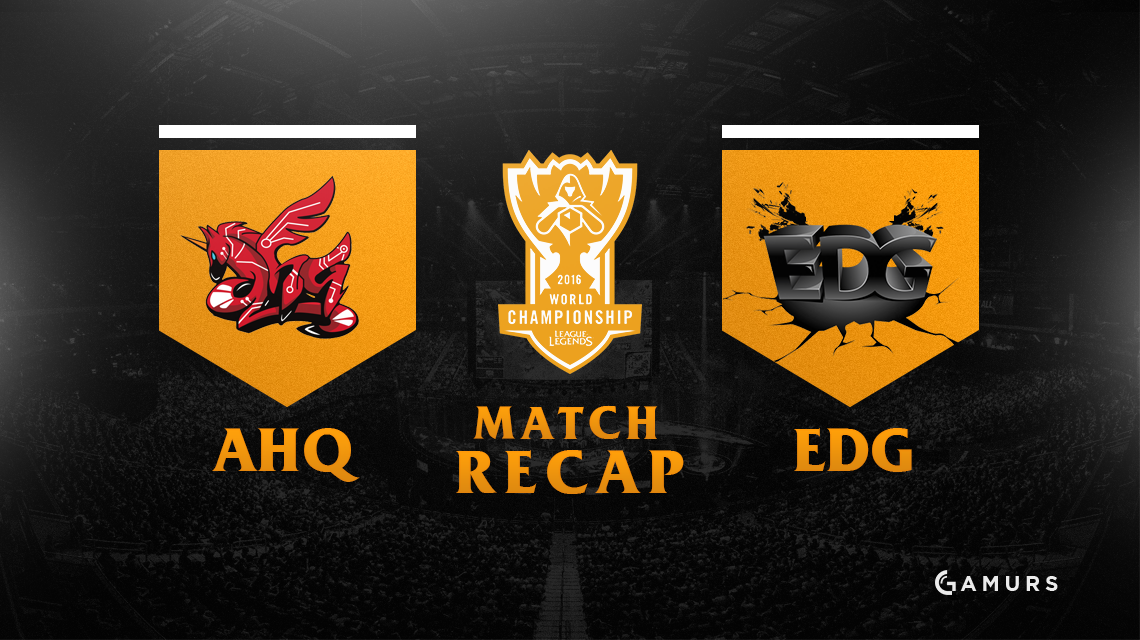 With H2K securing a spot in the quarterfinals, we were left with GPL’s AHQ and LPL’s EDward Gaming to battle it out for the last spot from Group C. The winner of this game will play H2K the first seed in this group.

Early Game: A Slow Start and Even Trades

The first bit of the game was very slow, but AHQ was taking a gold lead. Albis and AN had a strong engage on Meiko that resulted in first blood and an Infernal Drake for AHQ. EDG refused to let AHQ’s bottom lane get ahead, so they started a five man dive on the bottom lane for two kills. Mountain remained nearby and managed to sneak a kill on ClearLove and brought the game to an even 2-2.

Mountain thought he could duel ClearLove for Scuttle control, but he didn’t realize three other members of EDG were nearby, resulting in two kills for EDG. Not long after, AHQ had a strong teleport gank towards bottom lane, giving them two kills to once again bring the score to an even 4-4. Despite the score and dragons being even, AHQ managed to keep a strong 6k gold lead.

With constant trades in kills, AHQ managed to take more in terms of objectives and kept their lead strong. Keeping the gold lead as close to 6k as the could, AHQ started forcing EDG to play a reaction game. Almost every team fight ended with both teams coming out even, until AHQ over stepped their boundaries, giving EDG some footing back into the game. With this, EDG pushed AHQ into their base and got a few kills to bring the score to 11-7 in EDG’s favor, yet they were still behind 6k gold.

EDG started to bait Baron and AHQ took it, which gave them three more kills and a Baron to use on AHQ’s base. The pressure that EDG was applying allowed them to get all three inhibitors. At this point, they just waited for their super minions to do their dirty work for them. While AHQ was left to deal with super minions, EDG secured an Elder Dragon and managed to catch two members out to give them free reign on AHQ’s base.

EDG is now 4-2 and AHQ is 3-3, meaning EDG will have to play against H2K to determine who the first seed from Group C will be.