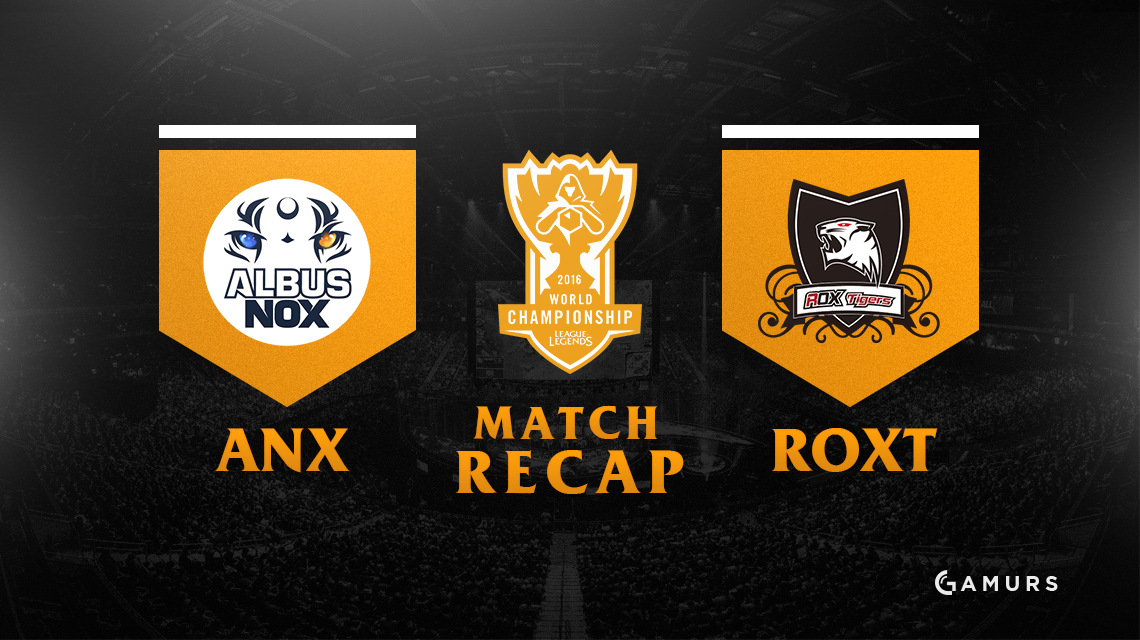 Alexander “PvPStejos” Glazkov took advantage of Nidalee’s early power and ganked Lee “Kuro” Seo-haeng at five minutes to secure a first blood. Two minutes later, PvPStejos came back to mid lane for yet another successful gank, netting Michael “Kira” Garmash a kill and a colossal lead on his Vladimir.

Despite Kuro‘s troubles in the mid lane, Kim “PraY” Jong-in and Kang “GorillA” Beom-hyeon used their high kill pressure and obstructive picks to accrue a large CS advantage in bot lane for ROX Tigers. ROX tried to make plays around the map once the mid game arrived, but Albus NoX Luna turned many of their attempts with superior rotations and took small advantages from skirmishes.

After a long chase for Dmitri “Smurf” Ivanov by ROX Tigers, he used Poppy’s ultimate to its fullest potential by removing two ROX members from the picture, and Albus NoX took out PraY and Yoon “Peanut” Wang-ho, leading to a free Baron and a 6k gold lead for ANX at 26 minutes.

Albus NoX, boasting a 9k gold lead, brute-forced their way down mid lane, killing Kuro and taking a 34-minute inhibitor. ANX then attempted a risky Baron, but it was botched when Kuro‘s Syndra miraculously “outsmited” both junglers.

After both teams bluffed around Elder Dragon at 40 minutes, ANX continued to attempt their siege without much avail. At 45 minutes, Albus NoX, led by Kira, snuck Elder Dragon and pushed for a second inhibitor. ANX then headed to Baron to bait but lost a four-for-one lopsided fight when Kira got popped before the fight even began. ROX Tigers then took a free Baron and, despite an 8k gold deficit, looked like their superior teamfighting composition would lead them to a come-from-behind victory.

The game went back and forth, as ANX poked out ROX and retook mid and bot inhibitors, trading kills. Albus NoX headed to Baron, but it was stolen again by ROX Tigers, this time by Peanut. ROX Tigers then began to begin their push down mid but stopped, and at 60 minutes, the game was in gridlock; the next fight would surely decide the game.

ANX pushed down mid, hoping for more inhibitor sieges. In an incredible fight which featured insane kiting by Vladislav “AMiracle” Scherbyna, PraY was picked off early but ROX Tigers won the extended fight four-for-three. Albus NoX respawned and took the Baron for free and looked to push to finish due to their inhibitor advantage. In another exhaustingly extended teamfight, Albus NoX’s sieging advantage and Baron buff was too much for the ROX Tigers to handle, as ANX finished off the last nexus turret and, with extreme help from their empowered superminions, the ROX nexus finally shattered at 65 minutes.

Albus NoX Luna improves to an astonishing 4-1 record and clinch a spot in the quarterfinals, while ROX Tigers must defeat Counter Logic Gaming later tonight to escape the group.