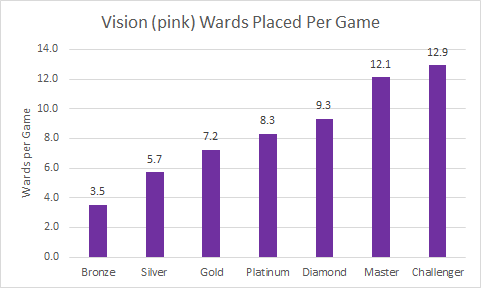 Greetings, and welcome to the first in series on “Why You Are in Bronze” – where I will compare in-game statistics between players from Bronze to Challenger and attempt to point out how to improve one self with statistical evidence.

Wards are a very important part of the game since they provide vision control. Therefore, it is not so surprising that players of higher Elo brackets will place more wards in a game. In fact, Diamond games have thrice as many Vision (pink) Wards placed as Bronze games on average.

The statistics on Trinket (yellow) and Sight (green) Wards are slightly more complicated. On one hand, we can see that higher Elo players place more Sight Wards: 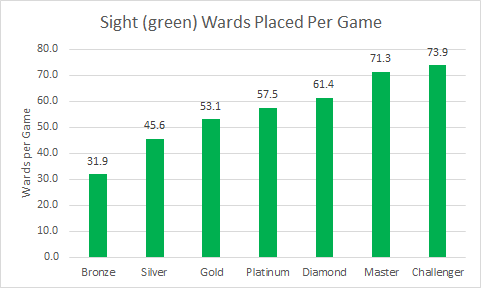 On the other hand, there is also a decrease in Trinket Ward (including the updated version)  placements: 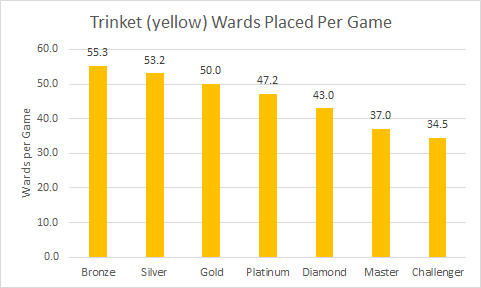 Therefore, we see that as we move up in Elo brackets, the use of Sight Wards increases but the use of Trinket Wards decreases. This is presumably due to higher usage of Sweeping Lens (scanner) in higher Elo games. In fact, if we juxtapose the two bar charts above together, we see a clear trend: 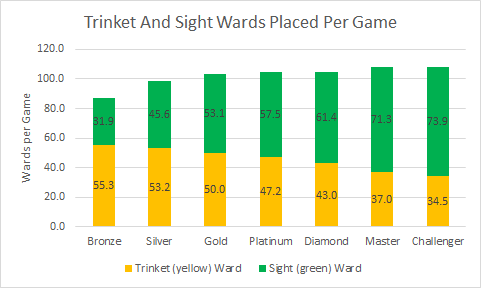 Overall, there is still more wards placed in higher Elo games in absolute counts. However, since Trinket Wards don’t last as long, it’s not hard to see that the higher proportion of Vision Wards leads to more vision control.

While it is not hard to believe that higher Elo players place more Wards due to the intrinsic desire to control vision, there is also another factor in play – Trinket and Sight Wards die a lot more often in higher Elo games – presumably due to the higher usage of Vision Wards and Sweepers. Only 3.7% of these invisible wards in Bronze games are killed before they naturally expire; in Master games, it is more than 15%. Due to a lot more wards dying in higher Elo, it is not hard to see the desire to place more wards. 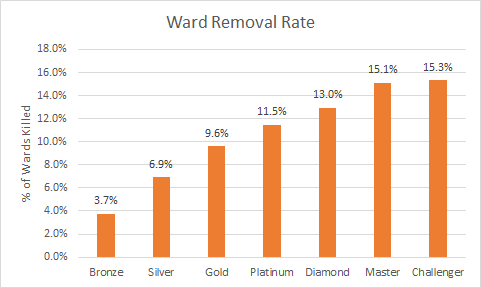 In conclusion, we see that vision control is more competitive in higher Elo games. Wards are placed and killed more often, and the usage of Vision Wards is far higher. Such are the things we need to keep in mind while trying to improve as players.