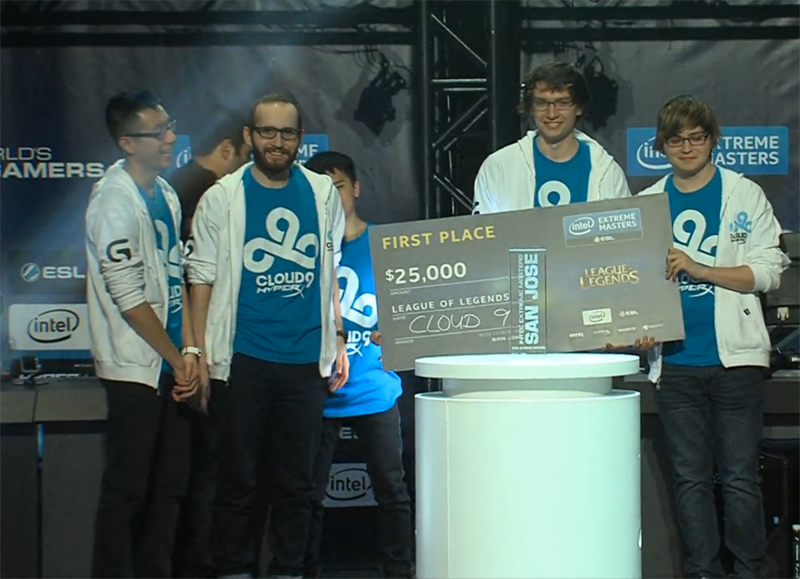 Everyone has a favorite team, whether you chose them because your favorite player works with them or you are a long time fan of the organization maybe, as Fionn said, you like the color red over blue. It doesn’t matter, when you start to know their players, their strengths, story lines, big moments it becomes more than a preference, it’s a passion. My passion is Cloud 9.

I’m really new to the league of legends scene and game in general, only started watching after season 3 worlds and came from the call of duty scene so the idea of having a league system where you can see the teams play every week was fascinating. After re-watching most of the 2013 summer split I decided to support C9 because well it’s easy to support the guys dominating. Fast forward to spring 2015 I’m still loyal to the team, and seeing the captain Hai step down and ultimately break the magical line-up made me go back and think why I love this team. It’s the players, after 2 years fans have seen them evolve in game play and as personalities.

The Evolution of meteos.

Will “meteos” Hartman stormed into the Lcs with the rest of C9. And quickly entered the discussion of the best NA jungler alongside Xmithie. One thing is certain, he was the most efficient jungler. With farm heavy champions like his iconic Zac or nocturne, he found the perfect balance between farm and map pressure, always out-farming his opponent and getting ganks in the top lane thanks to his amazing synergy with balls. Meteos was unbeatable until season 4 came around and farm junglers went away. The meta evolved into a much more early pressure ganking style. Meteos Quickly changed his way of working and adopted champions like elise and lee sin, despite not being the best lee sin mechanically he still found a way of succeeding by being everywhere in the map always trying to duel the enemy or find ganks in all lanes, he was a work horse on that champion and delivered impressive performances. Also his Elise was a stand-out being one of the first ones to play the CDR- tank build along side lemonation’s morgana and achieved one of the few wins for a western team against an easter team, OMG on the all-stars 2014. In season 5 the meta has practically came full circle and we are back to tank junglers like gragas and sejuani in which meteos had the beautiful 5 man ultimate against Team SoloMid in the 2015 spring finals.

Meteos has shown that he is an elite western player and he is also Meta resilient is one of the signs of all-time great players.

The Rise of sneaky

Zachary “Sneaky” Scuderi was the last member to join C9, brought in after WildTurle left for TSM, sneaky was more a utility based adc bringing the innovative Ashe Zyra bot lane along lemon, in case of Ashe being banned he would usually default to the likes of varus usually not having the spotlight on him unlike balls or meteos but he was still there dealing consistent damage or applying the cc with ultimates.

He Started to develop in 2014 where the tank meta didn’t allow balls to carry from the top lane and early pressure junglers didn’t scale well into the late game, C9 needed a carry  and sneaky was there to step up. At first, It was his lucian always dealing massive damage and being in the right position, then twitch assassinating all the squishy targets and spraying through full team with the ultimate, even mastered prefect positioning with Kog Maw showcased in a specific game against curse in the summer split where he put the team on his back and ended the game on a quadra-kill. When worlds 2014 came around he was in the discussion for best adc on NA and solidified his title during the tournament with impressive performances on corki and his phenomenal game against the Korean power house Samsung Blue finishing  the game 11/0/4 and another great quadra.

Sneaky is definitely the most improved player from the team as he continues to get better and out great numbers even in defeat, sneaky appears to have yet to hit his real prime.

Hai “Hai” Du Lam is a true veteran of the game. Started in 2012 with Orbit, hai has always dreamed of not only being a pro-player but also to have a brand, he dreamed big. He joined Quantic but after failing his first qualifier for LCS in 2013 losing a  base race against team MRN, it was heart breaking but hai prevailed and tried again in summer with a different roster and this time he made it and renamed his team after what would become of the biggest brands in e-sports Cloud 9. Hai is a very smart men outside the game but even smarter in game. He revolutionized  the NA scene with his unparalleled macro-play and shotcalling. C9 was by far the best team strategically and that compensated for Hai not being as mechanically gifted as players like Bjergsen  but he made up for it, coming uo with smart strategies on the fly, usually hai leads the team with assassins by initiating of splitpushing, he made some of the best teams run around the map with his intelligent splitpush, if they came after him the team would get baron or another objective their games against Najin White-shield are a great example of this strategy. We should be grateful for the great Games that hai gave us but also for changing e-sport in general by creating Cloud 9. He made Jack Etienne the general manager of the company and quickly picked up teams from all games like CS:GO, Dota 2, smite which won  the smite World Championship, even picking up one of the best Super Smash Bros players Mang0. C9 has helped e-sports grow as an industries by breeding talent and helping players make a brand of themselves, and to think that it all started with hai’s dream of being a pro player and living in the Cloud 9. And for all that we should thank Hai and hope that even after he stepped down he stays and helps the scene keep growing.

Cloud 9 will always be remembered as the team that revolutionized NA and put them back in the race to try to contend for international  tournaments, they showed us great games not always wins but always great games, as a fan I can only say thank you for being my passion for this 2 years and know that I and lots of other people will continue to cheer for you even if hai can’t be in the rift anymore.

Here I leave you some of my favorite C9 games so you can get started on them:

If you made it this far, Thank you for reading! I am in no way a writer this is actually my first tiem trying something like this, those were just some thoughts I had about the team that I wanted to share and it was quite fun actually. English is not my first language so sorry if there are grammar mistakes or stuff like that! Also I would love to hear feedback so if you have anything please feel free to comment o whatever! Thank you guys! If you so want to you can follow me on twitter: @Imp_Wannabe