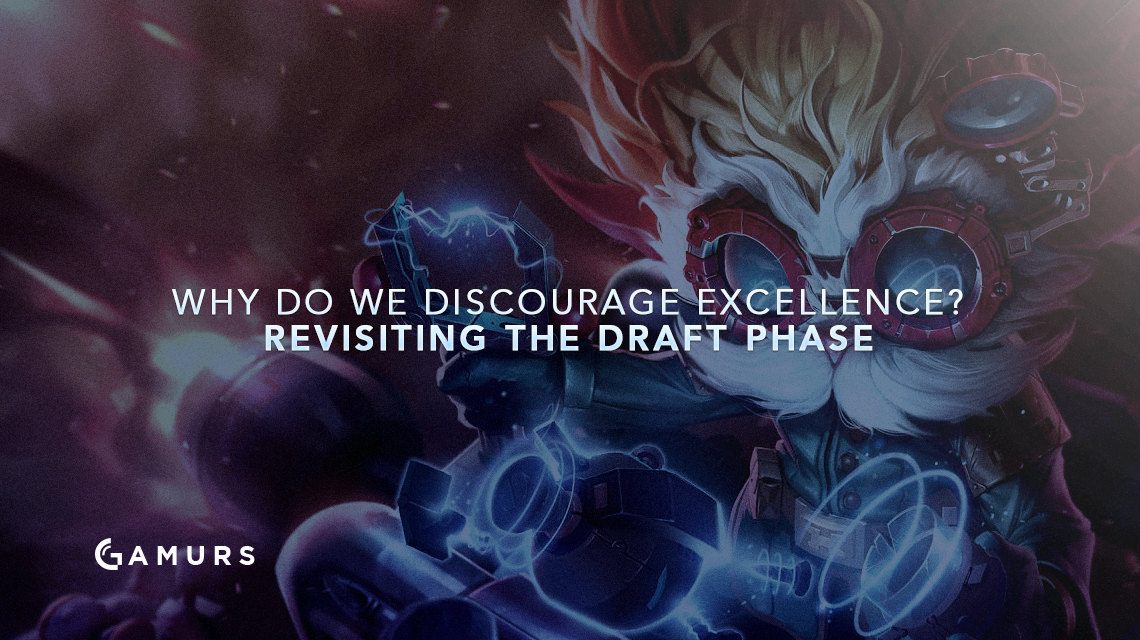 As of 2016, few things shape the competitive scene as much as the pick and ban phase does. What champions are played, where they are played, how and against whom; these are all incredibly crucial factors for the player experience and, more important still, for the viewers. Every match we avidly consume is dictated by this small window, boring for many, yet this draft phase is the only thing allowing us to enjoy watching the best players in the world perform at their very best.

The pick and ban phase is an archaic system, meant for an era long gone. A good competitive experience must be proficient in two concepts: having fair competition and keeping the viewers engaged and interested. Here, at first glance, the system is doing a pretty good job. Bans allow you to keep overpowered champions from completely shaping a meta and having all games be the same, while also allowing counter-pick champions to have a place. The no-substitution draft system is a pretty good idea as well. Not allowing a champion to be on both teams makes the game less confusing and more diverse, and this obviously makes for a better viewing experience.

I’m sure the community, as a whole, has better criticism than I could ever achieve to offer, but these are, in my opinion, the most remarkable downsides that the draft phase presents.

The system is asymmetric. This issue is inherent to the format of playing an odd amount of games on the asymmetrical Summoner’s Rift. While this can’t be completely solved, a good solution should look to minimize it. Later, we will see how we can make the influence of this problem smaller.

The system is unnecessarily random. There is no point to not show the dragon spawning order for the game. This would make the draft richer and more strategically diverse. I can see that it might make it exciting for the viewer, where your team might get lucky with the dragon spawns or win off of it, but since they are not an instant chunk of gold, it is very hard to see them immediately influence a game. This loses the adrenaline reward of the randomness, while keeping the problems of fair competition and fails to take into account that the fan of the team who has unfortunate dragon spawns gets less enjoyment from the experience.

The system does not feel like solo-queue. On the surface, it might look like it, but it doesn’t feel like it. The key difference is that, in solo-queue, no one knows you. No one knows your best champions and no one intentionally bans you out. I completely agree with the change Riot made to the lane swap meta, because of this very same reason. The game has to feel like solo-queue to have most viewers invested, not look like it.

The last point, although very tied to the previous one, is separated because it is the most important. We, as humans, watch professionals because of the pleasure we derive from excellence. There is a deep satisfaction in watching someone perfectly execute a complicated task, especially if you often try to yourself. It is the single biggest force driving people into watching competitive LoL. From Henrik “Froggen” Hansen’s Anivia to Lee “Faker” Sang-hyeok’s LeBlanc,

there are
innumerable players who have been kept from showing us a “best in the world” performance level. The system is keeping us from enjoying the highest levels of excellence, and we are keeping players from the credit they deserve for it.

The alternative I propose is not flawless. It’s far from it, but if I had to change pick and ban and do it today, this is the draft I would implement. This idea keeps three bans per team, altering the sequence in which picks and bans intertwine, in order to address the previous issues. It also brings an old idea back into game five of a series.

At the start of each series, a coin is tossed, with the winner choosing either who picks first or which side to play. There is no reason for having the sides of the map being determined by who has first pick. You might have an outstanding top laner and expecting him to get camped, choose blue side. Or, in the same situation, if he is an amazing Jax player, you might want to secure that pick for him. Both choices have upsides and enrich the strategic depth of competitive LoL, while not affecting how much the game will feel like solo-queue.

If team A has the first pick, this is the structure of the pick ban, that will be later explained in detail.

Because first pick is so powerful, the team with the first pick priority makes the first ban, before anything is picked, since banning first is always a disadvantage. While this opens the first pick to either get their best champion or the most in-meta pick, ironically, the fact that there is almost no competitive reward for mastering a champion makes it so that overpowered meta picks are more powerful and influential. If you pick an overpowered champion against a decent champion, and you traditionally think about players that have mastered a pick, you see that there is no clear advantage, since both teams have to level up in terms of power comparing how it is now. It is only when people are encouraged to play multiple champions at a similar level that overpowered picks shine.

Still, if a player just so happens to have mastered an overpowered meta champion, you still get to ban it and, if someone is so good at a champion that he makes you choose between banning it or banning the overpowered champion, he deserves an advantage to win the game, even if he doesn’t get to play it. Why shouldn’t this be the case if the point of a competition is to determine who is the best at the game? The deep champion pool rhetoric is, at best, unreasonable, and while it’s an admirable ability to have, the fact that you can investigate your opponents places exaggerated amount of merit on it with the current pick and ban mode. It is more of a narrative that has us ignore the flaws of the system than it is a good metric for who is the best at the game. If I’m good at Leona and you are godlike at Alistar, as long as we both draw a ban to it, we are both getting the same consideration in skill by the system, when clearly you deserve more. This discourages mastery, which is precisely what we want to watch.

From here on out, double snake draft follows to the end, with two additional bans per team after the second pick, for various reasons. For starters, since the game is strongly balanced around solo-queue, keeping the draft as similar as possible makes it so no wonky results appear in either casual or competitive, due to a difficult to balance dual format.

The game might also be inadvertently balanced around solo-queue draft. Changing it too much might have unexpected results in competitive that make the new draft completely broken, unsalvageable and, worse still, this might only be noticed months after it is implemented, when multiple people all over the world spend enough time trying to break it.

With this format, the third pick of the game works as a soft first pick, because it happens after a ban phase, and helps balance the strength of the first pick, which is a problem that the current format does not address.

Lastly, I really enjoy double snake draft. The fact that you can suddenly get two picks and completely throw your opponent off with an unexpected composition and game plan is something single snake does not provide; it makes strategy deeper and the amount of compositions played more diverse.

Unrelated to regular drafting is the fact that every fifth game in a best-of-five would be blind pick, as on old OGN, with sides chosen randomly for each team. This presents many advantages.

Since everyone can get every champion, there is no unfairness in the picks.

As we have it right now, different metas can favor either having first pick or last, increasing the asymmetry of the total series, and having luck play a bigger role in it.

Perhaps the best point to make about this is that it makes for a crazy experience for the viewers. Not only does it build even more hype for the matchup and makes your brain remember at every instant that you are watching a game five, increasing the emotions you pour into it, but it is also a situation where the motives for no substitution draft vanish. Remember, we have no substitution draft to keep all games from looking the same, but ignoring it here achieves exactly that same thing.

This would make finals both exciting and refreshing. It’s not as exciting watching a fifth instance of the same scenario you already watched four times as it is watching a completely new game mode. Immediately, your brain enters a high stakes state, sending hype through the roof as every player in the game is, in a certain sense, unchained, playing the perfect composition they would choose if their opponents didn’t know how to ban or draft. It is something we should fight for, even if drafting remains the same.

As in real life, there is no perfect system, and avoiding change until a perfect solution is found is unproductive and leaves us dealing with unaddressed problems. The only perfect solution is trying to identify problems and working on eliminating or palliating their effects, in order to achieve a more rewarding competitive experience, both for the viewer and the players. I really hope the community gets more involved in the idea of shaking up the draft, so we can all help Riot make this game even better.

Do you have any ideas on how to improve draft? Tweet to @Cabramaravilla or @GAMURS and let us know your opinion.

@Cabramaravilla is a freelance analyst.

Credit to lolesports and lol.gamepedia.com for the images.