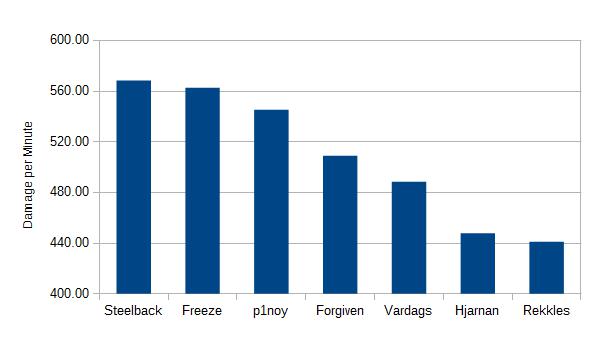 With half the split wrapped up, we finally have enough games to start looking at statistical trends for the LCS teams. We will start with the adc position. With plenty of storylines (“by far,” pretty boy Rekkles, Freeze’s Draven) to prove or disprove, using actual facts in the argument.

We will use the “damage to champions” statistic in this analysis. All data is from Riot’s official match history page. Why damage to champions? I personally feel it is the most important stat for and adc – says so in their name. Carry the game by doing damage with auto-attacks. Seems simple enough.
Now this sort of analysis does make adcs on teams that fight a lot look better. It would be best to include a structure damage + dragon/baron damage stat for teams that rotate around fights, but that doesn’t exist currently (rito pls). We’ll go through the stats quick and then do some evaluations at the end.
I also only included 7 of the 10 players, ignoring the bottom three teams. That gets rid of some of the bottom dwellers.

First stat we will look at is damage per minute. I don’t like just looking at total damage, as it is skewed by teams that play longer games. So we normally the total damage stat by dividing by game time.

So with this, we see three tiers of damage threats. Steelback, Freeze, and P1noy all do around 550 per minute. Next, at around 500, we have Forgiven and Vardags. Finally, Hjarnan and Rekkles at 445.
Fnatic, Wolves, and Gambit do have a lot of kills in their games, and this shows that their adcs contribute a lot of champion damage to that effect.
Forgiven, considered one of the best in Europe, appears mid-tier from this. Maybe partly because SK doesn’t teamfight as much, and when they do, he is likely to sit back. Same with Rekkles – who has long been critiqued for valuing safety over damage.

Also very interesting – Hjarnan, Forgiven, and Rekkles are noticeably less efficent than the leading four. This may be a stat that punishes players that do get all the farm, as they can’t do the damage to match.

The final stat is a little more complex. We will look at the difference between percentage of team damage and percentage of team money. All the adcs did between 25% and 30% of their teams damage, and all received 22% to 26% of the team gold. So rather than look at those stats, we will look at the difference – who overperformed the most. Look at who is the most communist of the adcs, producing more than they recieve.

This may just indicate which adcs are most likely to group with their team and fight – taking % team damage helps account for a team’s tendency to fight.

Lets conclude with notes on specific adcs (random order)
Forgiven – These stats really don’t show him in a favorable light. I think part of this    is SK’s tendency to avoid fighting, preventing him from chances to do damage.  That said, based on the amount of gold he takes, he should be able to do more.
Steelback – These stats look good for him. Does lots of damage with little gold. I  think that his role as clean-up definitely makes him look better; that said, he knows  how to get in damage around Fnatic going crazy.
Freeze – Performs very well according to these statistics. He is getting a lot of credit  as Wolves makes their way up the standings, and it looks deserved. Their  investment in getting Freeze farm pays off handsomely in terms of his damage  dealt.
Hjarnan – Is in the bottom of these statistics. Not really one of the big carry threats  on H2K, but he is also is fairly inefficient with his money. Again, this may be H2K  avoiding team fights, but even scaled with total team damage he looks very  average.
Rekkles – Also looks bad in these statistics. Him and Hjarnan are a definite bottom  two, with Forgiven only slightly ahead. He is widely bashed for staying safe rather  than doing damage, and it looks like that is true. Unfortunately, Elements invests a  lot of gold in him, which doesn’t pan out as damage. For someone who is  considered one of the best in Europe, he should really do more.
P1noy – Looks very good based on these statistics. Top two with Freeze, followed by  Steelback. He gets the 2nd lowest gold %, but does the highest damage %. It  doesn’t matter that he isn’t given the gold some of these star players are – he can  still do “tons” of damage, and fulfills his goal as an adc.
Vardags – Looks average. Which is pretty good. He isn’t expected to be the main  threat on his team, and isn’t, but contributes his share of the damage even when  not fed.