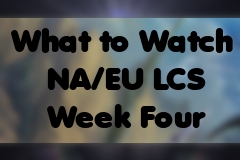 The hype is real!  TSM and CLG are set to collide in the season’s first can’t miss it match.

The two teams are battling for first place in a field where no other teams have looked nearly as dominant.

TSM has only lost to Team 8, in a game early in the split where they made some huge mistakes in pick/bans.
Teams sensibly don’t give Calitrlolz his Irelia often.

Hard not to get ahead of yourself with that much hype, but taking a minute to look back at the previous week; A very strong showing by the Copenhagen Wolves and inconsistent play from the Unicorns of Love drove down my accuracy.
Going 6/10 in Eu and 7/10 in NA it was not my best week.

Looking forward, there are some very interesting matchups this week, leading up to the CLG vs TSM hype train on Sunday.

Game to Watch:  Unicorns of Love facing Roccat is a going to be a great matchup.  Both teams are making a strong case as the third or fourth best team in the EULCS, with both teams owing losses in their 3-3 records to Elements and SK.
UoL has shown they can beat Fnatic, who took down Roccat in a grindy match.  Roccat need to win this to put themselves in the discussion, or be left in the middle of the pack.

Game to Watch:  If Roccat go into Day 2 with a win, watch the Copenhagen Wolves against Fnatic.  There is only so much methodical play you can enjoy.
However if Roccat come into the day with a loss, then the match against H2K becomes very important for them to stay out of the bottom of the rankings, so look for them to play much harder than normal.

Game to Watch:  Similarly to the EU, the match to watch here is two teams with 3-3 records, both of whom have shown moments of greatness and baffling weakness.
Liquid have shown that when they get Piglet going they stomp hard fast.  Team 8 similarly look brutal in their wins.  When Slooshi gets going, even Bjergsen couldn’t stop him.  Both teams have beaten the best, then struggled.  Which one shows up here will determine the shape of the middle standings.

Game to Watch:  If you only watch one game this week, watch Team Solo Mid battle Counter Logic Gaming.
Bjergsen has been playing out of his mind, virtually solo carrying TSM through the season.  On the other side, Rush hour is on a roll, with Link and Zionspartan playing a cohesive and scary team based game.
Weak points to watch for are Wildturttle and Xmithie.  Both have been playing well, but neither have really had stand out performances.
I pick CLG to win because they’ve had a stronger team performance, going so far as to troll during their wins, however they need to take this game very seriously if they want to get to first place and stay there this time.