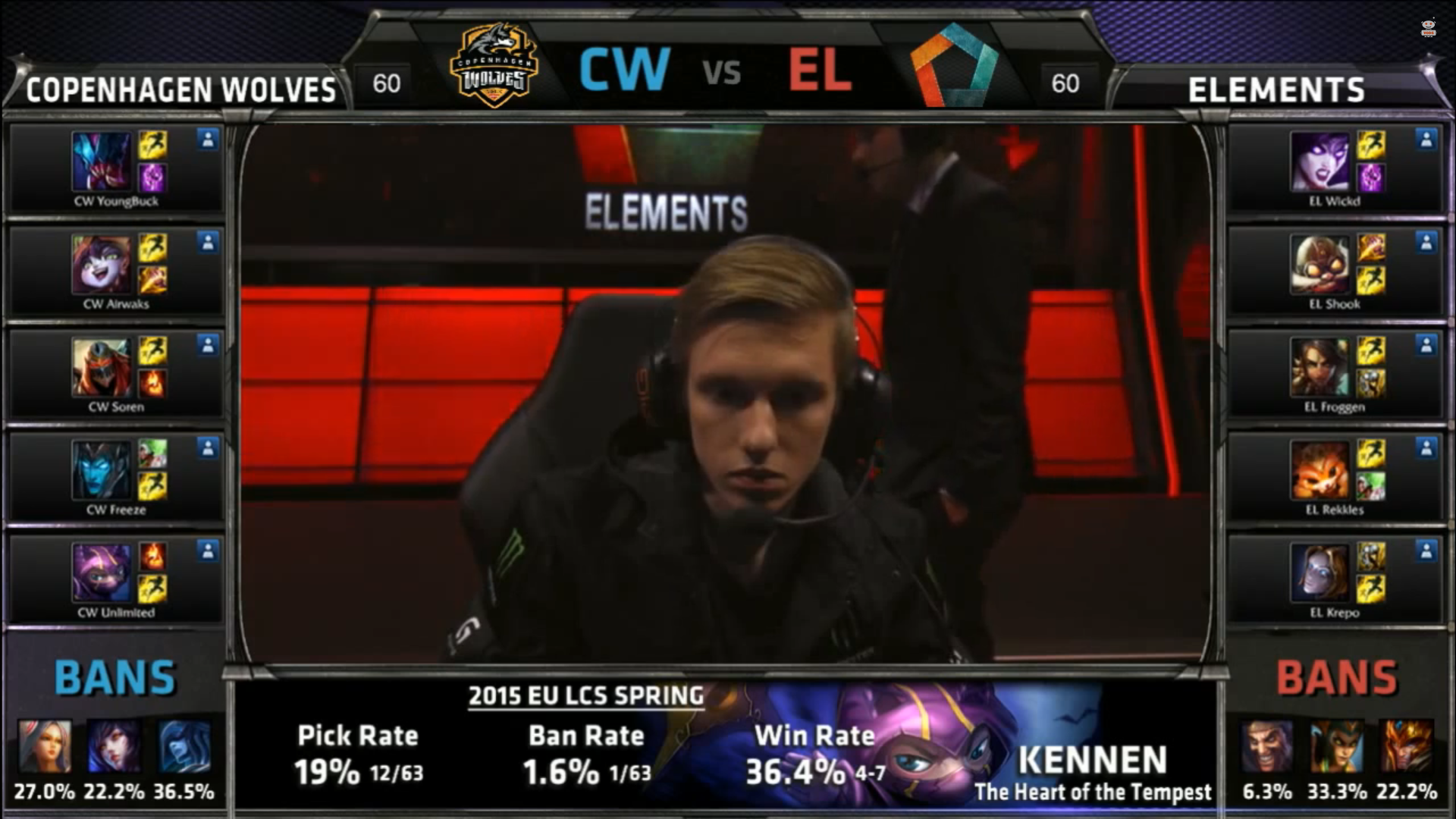 Hello everyone. Last night we had a very exciting match between Copenhagen Wolves and Elements with CW taking the win. We saw a lot of good team fight, solo play, but also a lot of bad and questionable decision made by both team.

Elements ban pick phase was very poor this game for a couple of reasons. The Draven ban was targeted against Freeze and totally unnecessary, because Kalista, Corki, Graves do same or better damage, have better mobility and fit into team comps much better than Draven. They could bait Freeze into Draven pick or simply leave it open. Instead of Draven, they had to ban Zed especially if they wanted to go with team comp they took. Since CW took Zed, Froggen was practically forced onto Orianna pick.

Elements could play a lot better this ban/pick phase. You know that CW will ban Irelia against Wickd and Lissandra against both Wickd and Froggen to lower Wickd`s champion pool. If they banned Zed instead of Draven, they could let Rek`Sai to CW, in first rotation take Ezreal for Froggen and Morgana. CW would need to answer with Corki to not allow Elements to have strong siege with Ezreal+Corki. After that Elements can pick Nidalee freely for even more poke and Gnar, Maokai or Mundo for Wickd as their tank.

Both teams went for defensive level 1 strategy, but Elements decided to lane swap. The reason why they didn`t invade is to catch CW offguard with lane swap and to deny Youngbuck even more. This could go very bad for Shook if Unlimited, knowing that EL lane swaped and having vision from Kalista scout`s, went to stop Shook from taking blue buff. It would be huge problem for Shook and if he was denied blue or got killed by Lulu, it would delay him even more with Airwaks possibly getting 3 buff start.

First blood happened on Krepo and it was only because Krepo didn`t paid attention on position of CW bot lane. The reason for botlane to be so close to the turret is because their jungler is coming and they want try to get a kill. They wouldn`t be so close to the turret if they wanted to poke because they would get turret aggro and lose a lot of health. The kill on Shook was because he was to greedy to kill Rek`Sai and went 1v3. The kill on Wickd was because he made a bad decision going back to 3 people and CW saw the opportunity and killed him.

This is Rekkles not respecting the fact that he doesn`t have any vision in the river or in tribush so he doesn`t know if Rek`Sai is there or not. Luckily for him he had flash and W to get out of that gank.

Again, no wards in blue buff side, no information on Lulu and Rek`Sai movements, very poor itemization. If his whole team is top and they see only mid laner, you must sense that something is up and fall back.

The decision they made next is very big problem. Froggen and Krepo started to recall 10 seconds before the Dragon which allowed CW to take him freely.

At 16th minute, Elements had 3 green and 1 pink ward down, while CW had 7 greens and 2 pink wards down.

Another Dragon, again Elements without a single ward in its pit or at entrance because Rek`Sai can walk through the wall plus they didn`t had a ward in the bottom of the river to see if maybe CW will take that path to Dragon.

CW completely out rotated Elements right here, but surprisingly is that Wickd is still farming jungle/top lane while he could just move to that Baron and save his teleport so CW doesn`t have TP advantage if they were just baiting EL.

Some bad decision making from Wolves allowed Elements to farm up, take turret and kill on Zed.

Since the threat of Kennen`s flash engage was too big, they needed to stop the Baron and retreat. Since they didn`t, Krepo needed to zone out Kennen a lot better by either trying to bind him with Q or ulty him when he was away from Baron just to stop his flash engage. Also, Froggen was poorly positioned in this fight, he was inside the pit tanking the Baron.

The next issue is Wickd`s decision to buy Frozen Mallet instead of Guardian Angel. With Frozen Mallet you get nice amount of HP, but since all carries on CW had LW/VS, that health becomes less valuable then MR or armor. With Guardian Angel, he would become more important for his team because he would become that very strong tank that EL needs and he could engage and not worry if CW throw a lot on him and eventually pop his GA.

Couple of fights happened after, with some common mistakes  like Elements grouping in small area allowing Kennen to use his engage ulty to maximum potential while Wickd was left 1v3 and a couple of other common mistakes that are not worth mentioning.

Look at position of Zed and Kalista. This was perfect scenario for Krepo to flash+ulti engage and zone them out of the fight completely. They would maybe use QSS but they wouldn`t have it for Morgana Q, Gnar stun. The Elements not checking that bush for Rek`Sai and allowing him to come from behind is just another mistake by them. Froggen played hide and seek with Rek`Sai for 1 minute and 10 seconds. On the first sight it seems like a useless thing, that he should better walk away and recall further, but he could be delaying that recall from Rek`Sai for long enough for rest of Elements to come back and take inhibitors, plus Kennen used his teleport to get to Froggen, so you can say that if Froggen really planned that, it was quite brilliant.

And here is where Elements lost the game by themselves. It is so sad that this really happened, but unfortunately this really happened. You have a huge minion wave coming from the top side that are already at inhibitor turret, you have 4 players while CW have only 2 players, you need only to destroy that inhibitor to win the game, because if they destroyed that inhibitor, they could go freely for 5th dragon and baron because CW would need to defend against 3 lanes of Super Minions with Baron buff + 5th buff from Dragon. Instead, they went for Dragon.

62 minutes in the game, Wickd still keeping that Frozen Mallet instead of buying Guardian Angel.

Youngbuck did an extremely good job by zoning Froggen and Krepo allowing his team to get that 5th dragon stack. Froggen was able to zone CW a little better, but with poor positioning of Krepo i don`t think it would change a lot.

If Krepo was a little bit closer, he could flash ulti on the carries of CW that are perfectly group for Morgana, and by doing that he would zone them out and heavily change the outcome of this teamfight.

Elements biggest issues right now are overall game strategy, decision making, knowing their limits when they can do something and when they must retreat, itemization especially Wickd and positioning when enemy team engages on them. With all these there is 1 more issue that I want to point out. If you watch Krepo when he is on player screen, you will notice that he is shotcalling with a lot of emotions. That is a problem because in stressful situations you must be clear headed to come with the right decisions and there must be no emotions involved.