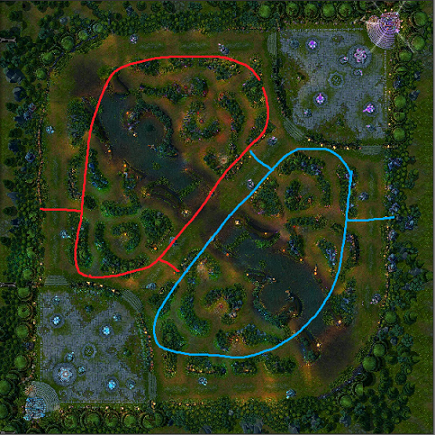 SK gaming, one of Europe`s best teams and currently tied with Fnatic for first place, went on an unexpected 3 game loss streak. Teams figured out their strategy which were same almost every game and just exploited it`s weaknesses alongside lack of a few core game aspects from SK themselves. Here i will break down SK strategy, how teams exploited it and how it should be done properly.

In situation where red side went for lane swap here is how jungle and pressure changes. Blue side jungle is now blue marked and these blue lines show where the pressure end – they put pressure at tier 1 turrets on bot and mid and the pressure from lane swap stops at tier 2 turrets. Same goes for red side. You probably noticed the advantage that blue side have is controlling the area around the dragon and by doing that they control dragon himself and vision around it. Since dragon is not giving gold anymore, it depends on team to decide if giving dragon in exchange for turret or 2 is worth, but beside this there are other ways of preventing blue side to get the dragon like fast pushing top lane, leaving ADC on top and sending rest 3 members to stop the dragon and so on.

When you plan on leaving your ADC solo top to farm, it is important to refresh or put new wards to protect him and allow him to stay top farming as long as possible while being safe.

Here is what happens to your ADC if you leave him on top with no ward protection.

And here is what happens to the jungler that walks into jungle part he know is warded and enemy jungler is there.

The first dragon in this game was actually gifted to UOL since Fox went back and that was a signal for UOL to come with a player advantage and take free dragon.

As you can see, UOL has superior vision at baron side of the map which gets them in a better position to start or bait a baron. At 17th minute also, SK was pushing bot tier 1 turret while UOL was pressuring top tier 2 turret, so they had a turret advantage. If UOL started to push, SK would have to recall and they would most likely lose that second turret. UOL had perfect warding for Baron while SK didn`t have a single ward. If SK wants to challenge the Baron, they must facecheck the bushes and hope UOL is really doing a Baron and not baiting them into a trap.

But there is another big problem here that can`t be seen right away. If UOL send their top laner bot to split push, SK will have to send Freddy to stop that split push. And here is a problem. If SK thinks UOL is doing Baron, they will go to stop them. If UOL engage SK, Vizicaci will be able to use one of the many wards to teleport to the fight, but since SK doesn`t have any wards, Freddy can`t teleport to the fight but instead he is forced to TP to turret and leave SK 4v5.

Beside vision control being biggest problem, their decision making in early game also needs a lot of fixing both in micro and macro aspects. With IEM coming soon, knowing the power of Asian and especially GE Tigers, if SK wants to try to challenge Asian teams they need a lot to work on, without mentioning the preparation against them.