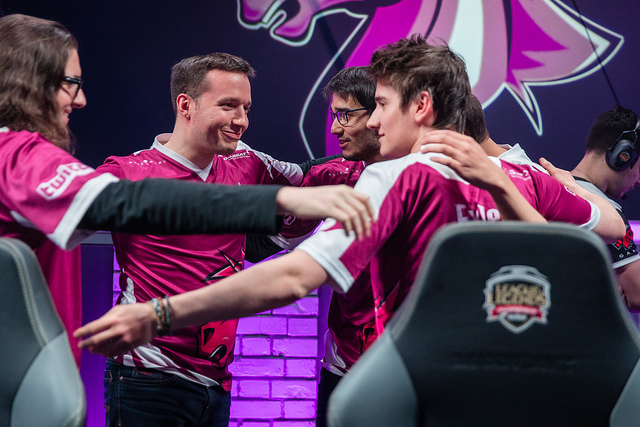 Heading into 2017, Unicorns of Love were a hard team to judge. After beating H2K yesterday in a clash for first place, many of those questions have been answered.

Unicorns were originally expected to be a major contender for the EU League Championship Series title. But many thought their hopes seemingly took a hit after AD carry Kim “Veritas” Kyoung-min’s surprise departure earlier this month.

Problem is, nobody told Unicorns that.

Without Veritas, Unicorns have played a safer lane phase. But when they get to the mid game, look out. Fantastic teamfighting from all five members has consistently carried them to victory, and that was no different against H2K.

Unicorns passed their test and are now in control of Group B. Here’s what we learned.

Exileh puts on the carry pants

This matchup gave us a head-to-head between two mid laners on our Players to Watch list: H2K mid laner Fabian “Febiven” Diepstraten vs. UOL’s Fabian “Exileh” Schubert. Febiven has been carrying games since 2014, when he made his name by solo-killing Lee “Faker” Sang-hyeok at the Mid-Season Invitational. But Exileh has also shown his potential at an international tournament, starring at IEM Oakland just a few months ago.

In the first game, Unicorns put their faith in Exileh by playing a two-carry lineup that demanded damage from his Katarina—picked specifically as a counter to Febiven’s Syndra. Serving as a primary carry, especially on a melee champion (albeit one with loads of mobility), puts a lot of pressure on a player. Exileh hardly was fazed. After UOL stalled out the early game, dodging away from H2K jungler Marcin “Jankos” Jankowski’s pressure, Exileh was the far better teamfighter.

Over and over again, he would dash in and pop a squishy while the rest of his team peeled. Support Zdravets “Hylissang” Iliev Galabov was especially good, seemingly unable to miss a hook on Thresh. H2K punished Exileh plenty for his bold moves, but even when merely trading kills, he was the aggressor. Meanwhile Febiven could merely kite around the perimeter of fights doing very little damage, even when it was his own team initiating things.

The winning fight came off of one of those H2K initiations. Hylissang survived Febiven’s ultimate, Exileh waited out an exhaust, and the chase was on. One, two, three, four H2K members fell to his whirling blades, including Febiven. This is some of the cleanest Katarina play you will ever see.

A new challenger emerges in the jungle

H2K fought back in game two off the strength of Jankos, whose first gank succeeded and started a snowball. He very nearly did the same in game three. Overcoming early shenanigans from Unicorns’ duo lane (who stole his blue buff), he was everywhere on the map starting with First Blood and a double kill on a bottom lane gank. His control over Unicorn’s jungle allowed H2K to take the first Baron, and it seemed like they were about to blow the game open.

The problem is H2K and Unicorns had been going even on fights H2K was starting. Unicorns’ positioning and target focus were that good. When Unicorns started initiating, the fights took on another flavor. Despite losing first Baron, Unicorns outfought H2K to stall out the Baron buff. Then they baited a Baron of their own and picked up four kills. The tanks peeled beautifully and Andrei “Xerxe” Dragomir’s Rengar was on-point, diving and getting out, often with only a sliver of health. In the final fight, he found his way to the back line, deleting Febiven to set up the Ace.

Though this was a close series, Unicorns answered several important questions. Their bot lane duo can really play, especially Hylissang. Xerxe is dangerous on the right champion. Exileh has the game sense and mechanical prowess to hard carry. They can split push and they can teamfight. And most importantly, they can adapt and find a way to their win condition, even when behind.

Unicorns of Love was always a dangerous squad, and now they sit alone on top of Group B.