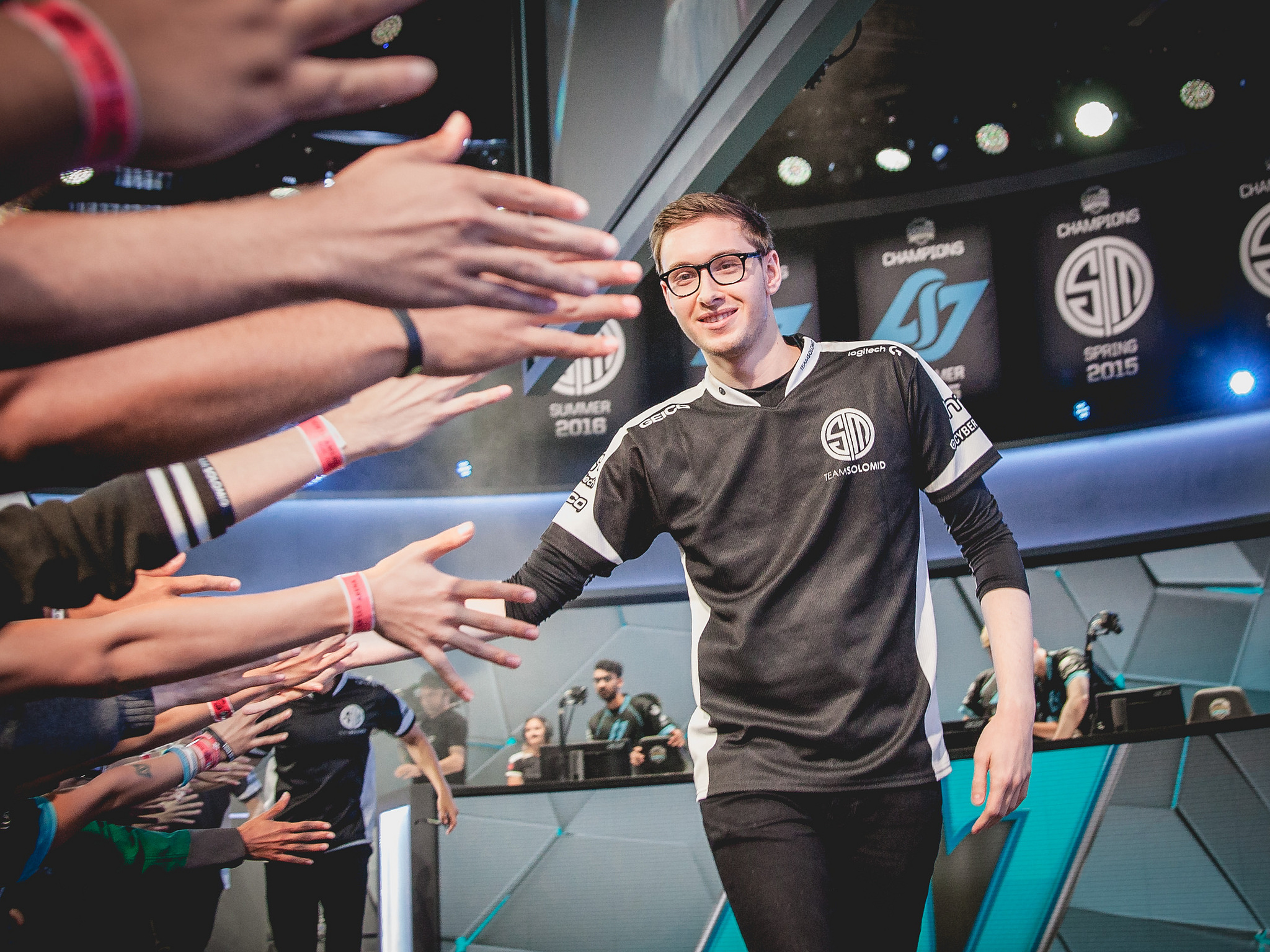 Good macro play can be hard to define. It changes depending on multiple factors like game time, gold differential, and team composition. It’s harder to identify compared to a big play or fight. A lot of the time good macro results in a minion wave either living or dying, far from the camera. The effects can be tiny, building up over time like death by a thousand cuts.

What’s so strange about the TSM situation is that their macro was so pristine during their incredible run in the Season 6 Spring Split. In what was the most impressive split seen in North America, TSM used their tempo to force their opponents into tough decisions. Those decisions often entailed giving something up for free. Give TSM enough inches, and your Nexus goes down in flames.

This year, TSM seemed to have lost the ability to impose their will on other teams. During spring, they adapted to a new ADC, Jason “WildTurtle” Tran, by focusing more on Hauntzer’s lane. But when it came to macro, it was the same game to game: TSM would try using brute force to pry open games. When that didn’t work, rather than regrouping and finding another place to apply the crowbar, TSM would just try more force.

In a way, TSM had become very much like another NA organization—their perennial rivals, CLG. Over the last few splits, CLG too has become very easy to read. Everyone knows what they want to do: split push. It’s predictable, but it works because it highlights CLG’s strengths and masks their weaknesses.

TSM’s version was the opposite: They wanted to fight.

TSM looked like they couldn’t back down from a fight. It didn’t matter where it was—two-versus-two in the bottom lane, invades in the top side, or their favorite full-on brawls around neutral objectives. It didn’t matter where the map was, who had a lead, or which side had minion pressure—TSM would throw down a bunch of wards and look to take you out.

They still repeated as champions because like CLG’s, the style fit the personnel. TSM banked on the fact that their players were more talented at fighting in five vs. five situations, and they were right. In the fight that won them the split, TSM’s players out-executed Cloud9’s in critical situations.

But you could see where things were coming apart at the hinges. Losses against bad teams. Listless wins where they somehow fought out of huge deficits. Teams started figuring them out. At first, it looked like overconfidence. But when it repeated itself even in important matches, signs pointed to something deeper.

After their spring championship, the team flamed out at IEM because for the first time in a while, TSM faced squads that were better at fighting. But more importantly their opponents were better at playing the map. Svenskeren died multiple times invading into the jungle because he was poorly positioned relative to his lanes, but also because opposing junglers knew where he would be. TSM failed to fully utilize the ‘protect-the-ADC’ meta at MSI, and in the final tiebreaker against Flash Wolves, they gave up multiple objectives for free as the LMS team dragged them around the map.

In essence, the Flash Wolves played like last year’s version of TSM.

TSM has been in a funk ever since. They went into Sunday’s match against CLG without much to hang their hats on. The first game wouldn’t give them much to build on.

CLG’s been playing the one-trick game longer than TSM has, and their results showed. They surprised everyone by pulling out mid lane Fiora for Choi “Huhi” Jae-hyun. Huhi is one of the most-criticized members of CLG, usually for his poor positioning and laning.

But in this one, CLG bought enough time for him to get to the mid game spike where Fiora is so dangerous. TSM actually showed good macro sense to get two early drakes by punishing CLG’s recalls, but they were just oceans. Meanwhile, CLG smartly took the bot turret, rotated their duo to the mid lane, and stuck Huhi in side lanes.

In his natural element, Huhi pushed wave after wave, accumulating an enormous CS and level advantage. And it’s not like he abandoned his team—he earned several kills on plays like this:

The second game in the series is not very instructive from an analytical perspective. On blue side, TSM first-picked Lee Sin for Svenskeren, which should be permanently banned at this point. Sven is amazing on Lee and ordinary on nearly every other jungler. He used Lee’s mobility to run away from this game, and TSM just got too fed.

As is often the case, the third game between the two teams was the best. Both teams played cautiously, leading to a tense tussle where neither was able to snowball. That allowed TSM to finally show off some of their fancy macro.

That isn’t an insane play. It’s a routine trade of objectives, Rift Herald for Mountain Drake. But TSM’s setup is impeccable. They lost the bottom turret, but wisely swapped the duo lane to the top side to control vision. The relative value of the two neutral objectives can be debated, but from behind, this is a winning play for TSM, trading a near-guaranteed tower with the Rift Herald for more amorphous value out of the drake.

If there’s a moment where the decline of TSM’s macro seemed to have started, it was last season’s Worlds. TSM looked clueless when they couldn’t win all three lanes. That’s why this play is impressive. Rather than panic at having lost the bot lane, TSM regrouped and set up a safe, winning play.

A rock and a hard place.

TSM would continue to play the map well, using minions waves to their advantage. This looks like a routine pick on Yiliang “Doublelift” Peng’s low-mobility Ashe.

But take a look at the map. Darshan Upadhyaya had just started fixing the bot lane which Hauntzer had pushed relentlessly. As a result, he’s under-farmed. Bjergsen had pushed out the top lane as well, gaining gold and solo experience. Doublelift wasn’t necessarily overextended because he didn’t expect CLG to be there—he thought they’d be fixing their lanes instead.

Because of that, even if Darshan hadn’t gone down on the back end of the play, CLG likely would not have gotten an objective off the pick. There’s just not enough map pressure for them to make a play on something like Baron.

Contrast that to TSM, who were able to start Baron even without winning a fight. This one’s not as completely free as the Rift Herald was, but CLG was so behind in farm and map control that it still was a good play.

When fights broke out, TSM had a response for that too.

Stuck between a rock and a hard place, CLG chose to fight, but they were too far behind. With a couple Barons under their belt, TSM looked primed to end the game.

This put CLG in a desperate spot. With few win conditions remaining, they called in a Hail Mary by setting up an ambush. It worked.

After killing nearly everyone, CLG saw a light at the end of the tunnel. They had to try and end. This is what good macro play does to your opponents: it makes them desperate, and desperate teams don’t think straight.

Svenskeren and Vincent “Biofrost” Wang did a heroic job cutting the minion wavae. CLG still forged onward. It was like Hernán Cortés burning his ships—CLG could only keep going. With no minions, Darshan died to a turret, followed by Josh “Dardoch” Hartnett. They never made it to the nexus.

That will be the ending to the game that most fans will remember. It’s the big plays, the kills, the fights, that gets blood pumping. But that winning play was built on the foundation of TSM’s macro. It was made possible by Hauntzer and Bjergsen eking level and CS advantages and by Doublelift farming his way back into the game after feeding early.

Big plays will always stand out, but TSM fans wanting their team to win should keep a keen eye on the state of their macro game.