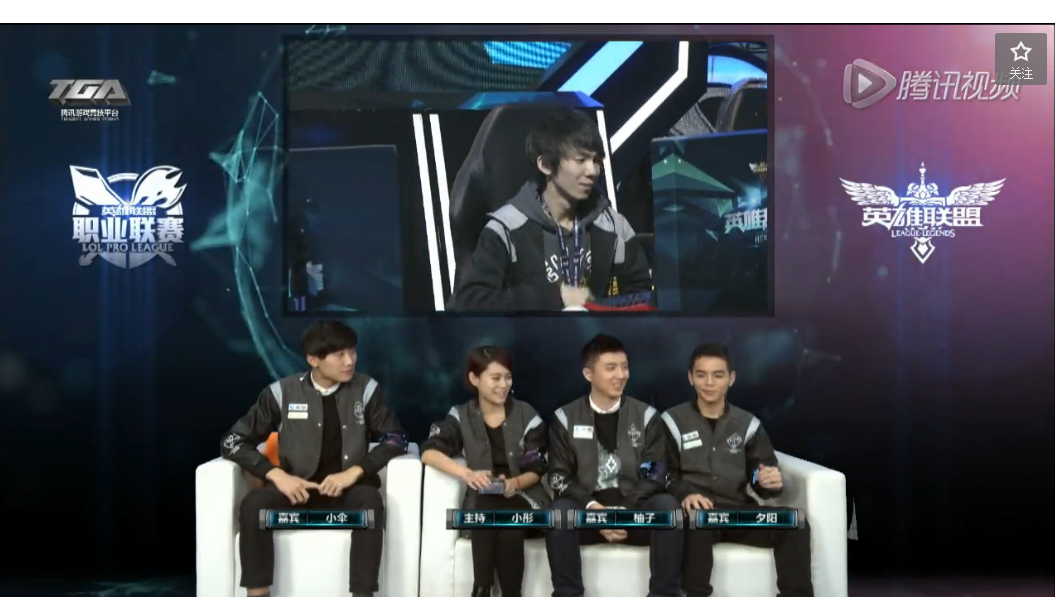 Tabe: Whenever I fell in the toilet, SHRC plays and they lose. I get really sad and hide in the bathroom to cry.

Hostess: First game we have M3 vs. EDG. EDG ranks #1, and M3 at the middle of the pack. We should see how M3 focus on Clearlove.

Tabe: The reason EDG #1 is their ability to lane swap. I spoke with Fzzf (EDG’s previous shotcaller) yesterday and we discussed how EDG plays. They know how to protect the ADC and handle lane swaps very well. When SHRC played EDG yesterday, first game was ok, second game was completely dominant by EDG – a perfect game. Of course, SHRC’s GodLike and Namei still lacks experience in this regard.

Tabe: M3 did their homework — they banned Lulu. They should be careful because Deft likes to play Corki, but banning Lulu takes away their “protect the ADC comp”. EDG first picks Maokai. The power of Maokai is that his %damage reduction on ultimate is very useful even in late game.

Tabe: M3 takes Deft’s Corki and Nidalee. I think EDG is likely to take Lee because it makes up for Maokai’s lack of damage top, rather than picking J4. M3 picks Morgana to counter Annie. The Gnar pick is like Gogoing’s pick in the OMG game – it doesn’t matter what top laner the other team picks, Gnar can counter.

Tabe: EDG should take Lucian because it’s much easier to protect. Two meta mid lane picks for both sides. I think M3 isn’t at a disadvantage in any lane, except against Maokai top with Gnar. Speaking of Viktor, Dade took Cleanse as a summoner spell. Most of Viktor’s skill has long range late game. If he takes Ignite, he won’t be in range to use it because its range is too short. Cleanse is really good against the enemy comp, especially if Maokai initiates with Righteous Glory. But it would be hard for Viktor to play against Ahri in lane because 1) facing PawN 2) enemy has Lee jungle 3) Viktor can’t cleanse both charm and ignite.

Tabe: I think any team against EDG is first not to have a disadvantage in P&B. M3 dug themselves into a pit. EDG has much better communication than M3. They messed up the TP play bot. It could be that Looper purely listens to his teammates’ call and do whatever they say with the TP ability.

Tabe: In S5, jungling has too many changes. EDG always follow Clearlove’s shotcalling. It is impressive how well EDG plays despite Clearlove having to deal with all the changes in the jungle.

WJG: I didn’t see first game’s P&B. Do you think there’s any changes?

Tabe: Big changes. M3 bans Lulu to take out protect ADC comp. But Kog’maw ban is redundant. They should have ban Maokai. M3 picks Lee first, but EDG can just pick J4 in response. I really like the Annie pick from EDG – Janna doesn’t counter Annie.

Tabe: I haven’t seen this champion in a long time.

WJG: She has a strong level 6 team fight presence though.

Tabe: Mundo at level 6 can’t beat Maokai at level 6. But at level 16 they are about equal. It looks like M3 is picking to scale.

WJG: Sivir with Fizz/Maokai/Annie/Eve looks like a 5 man hard engage comp from EDG.

Tabe: I feel Fizz got weaker. He can’t do much in lane, but at level 6 can one shot someone. His “E” also harder to reach backline. To be honest Dade lost his team the previous game – he made mistakes and got snowballed on.

WJG: These veteran mids are too good at snowballing advantages. No chance at all for counterplay.

Hostess: I think people should ban Annie against EDG.

Tabe: Meiko is a really strong support. When I spoke to Fzzf, he told me Meiko would be stronger than him if he keeps improving.

Tabe: LGD always use Acorn first, then Flame. It doesn’t matter what kind of score they have. Let me tell you why WE will 2:0 LGD. Despite their loss to TSM at IEM, I think they got so much stronger with Xiye and Mystic. They lost to TSM due to their morale being crushed after game 1.

Tabe: Xiye has 4 champions: Leblanc, Ahri, Diana, and Zed. He loves to play assassins, maybe he will play Fizz after watching PawN. WE target bans LGD with Cho, Thresh, and Rumble. WE first picks Maokai.

Tabe: Udyr! Really strong champion, as long as he gets Frozen Heart, he can duo Baron with ADC. Aw, he didn’t take it.

WJG: Vi for TBQ, signature champion. His J4 is really strong though.

Tabe: I don’t like J4 with Maokai, too much CC and not enough damage. Should have taken Lee. J4 can’t afford to buy an extra long sword like Lee. Basically J4 E-Q into a fight and dies. Lee can at least do some damage.

Tabe: Viktor pick for WE, really shuts down the enemy AP with his long range and CC. Weiless can play a strong Diana. I think Diana got buffed with higher rotation speed on her shields; similar to Ahri’s fox fire rotation speed, but more useful on Diana.

WJG: WE had an early game advantage similar to their IEM performance, but didn’t take advantage of it.

Tabe: Aluka likes to play a top laner that can protect bot with TP. It was just Graves got outpressured the entire game by Sivir except for the early laning phase.

WJG: Really strange Diana got that strong. I think bot lane tower fell too early and Weiless got to push bot wave for free.

Tabe: LGD gave up two dragons, Viktor was way too strong for Diana. It was mistake for WE to give up the 3rd Dragon. WE pushed to 2nd tier tower, but they hesitated and got hard engaged by LGD.

WJG: Morgana was out of position and got picked off by Sivir.

Tabe: Diana had a good flank there. Great flanking champion with her skills and low CD. It was weird that top and mid had that big of advantage, but WE’s bot lane got pushed super hard, which was unexplainable.

WJG: Funny how TBQ managed to solo kill a lot of times. He doesn’t care if Morgana has shield or not; he just goes in.

Tabe: It’s also funny how he got killed by the Baron.

WJG: I felt Diana didn’t do anything last game. But she got advantage after WE threw a fight. All she had was a Nashor’s — she shouldn’t have had any impact.

WJG: Vi is really suited for TBQ, literally is his name! (TBQ sounds like -> TaoPaoQuan -> running away Quan). He should wear a pair of boxing gloves on stage.

Tabe: What is LGD playing with their comp?

WJG: It depends how many people Annie can ult; everything else can be blown away by Janna.

Tabe: Morgana pushes top too fast — she gets ganked too easily. Her shield isn’t the perfect solution to everything. They are likely to swap lanes.

WJG: And wait for countergank on Vayne. LGD is playing really aggressive in this point of the season. They are going all in for the top playoff spots.

Tabe: I think Spirit brought up the entire team. Without him, WE would have lost.

WJG: If LGD won, TBQ would have got MVP. TBQ plays extremely aggressive in solo Q. He often chases 1v5 with his Rengar. But competitive is different from Solo Q. He can’t scare people in competitive games – his opponents are not dumb. They would just exhaust and throw skills at him.