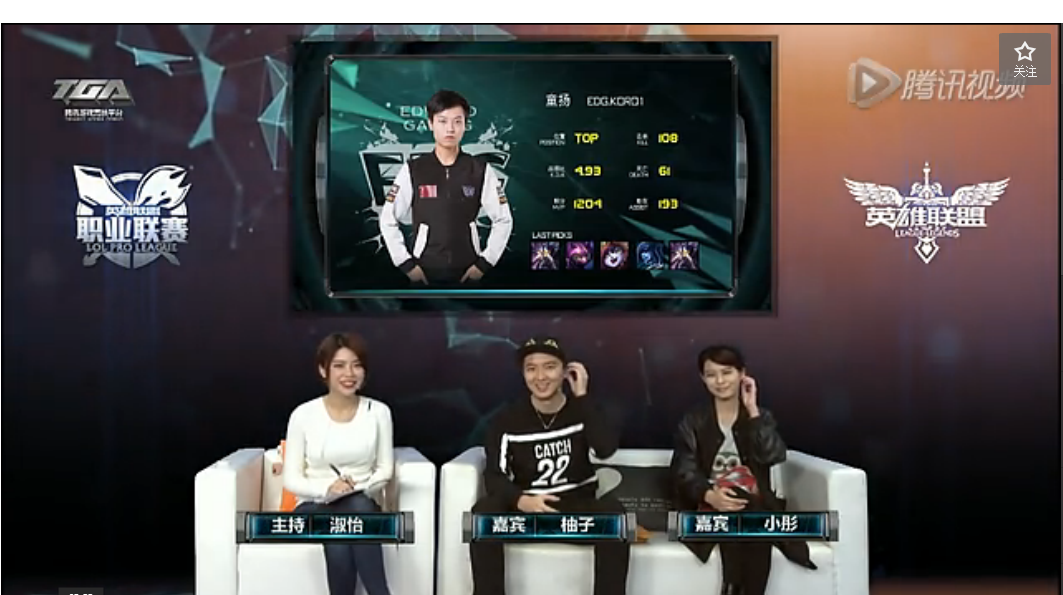 Pomelo: After my rant on my teammates last show, somebody told them what I said and they relentlessly attacked me when we went out for dinner.

Hostess 2: Great to have you reveal stuff for us. Have you guys seen EDG’s game yesterday? PawN’s Leblanc is OP.

Pomelo: PawN’s Leblanc is different from other people. Normally after a burst rotation Leblanc players retreat, but PawN cleverly uses his “W” ability to continuously find opportunities to attack the enemy.

Hostess 1: It’s not just PawN, Deft’s Kog also carried. Both of EDG’s core players showed up at the same game.

Pomelo: I think EDG has a higher chance to win against IG today. I don’t think they lost a single series yet.

Hostess 1: At the moment, EDG is on a winning streak. Their mentality is great if they keep winning.

Pomelo: I think IG performed well in the Demacia cup, but back to LPL it’s a completely different story.

Hostess 2: I think IG’s top laner got destroyed by ADG in another tournament. That was hilarious. I actually didn’t watch too many games’ last night. Too busy watching WE getting rekt in IEM all night.

Pomelo: EDG picks Viktor. After EP destroyed with Viktor 2 games in a row, everybody picked him up. Really strong laner. Annie for EDG, she has to win early or really struggles later on if without an advantage.

Pomelo:  IG picks kennen. Their strategy is to pick poke comp. with Kennen to prevent engagers. I feel EDG can hard engage on IG’s poke comp. If IG play well they can poke down EDG before a fight; if they play bad they might get aced and game ends right there.

Pomelo: (Rookie quits game early) Ah you are going to get fined 5k! You can’t do that!

Pomelo: Still can’t leave early. Have to wait till game ends and click the leave button. He is going to get fined!

Pomelo: Ya and I also feel IG’s comp. is too risky. If they can’t get advantage early, then they become extremely reliant on Kennen’s ult and zoning ability.

Hostess 2: Ya Kennen’s items also didn’t keep up with the game.

Pomelo: Isn’t Mafa one of the coaches?

Hostess 2: Ya, there were 4 people that went to IG at the same time. Poohmandu, Mafa, Rookie, Kakao. Mandu is coaching YG. I think IG is going to use a different comp., I saw Rookie chatting with Mafa for a while.

Pomelo: EDG bans Hecarim, I think they are scared of zztai’s Hecarim, he practice that champ a lot. IG bans Viktor from PawN to prevent another AOE destruction by EDG.

Hostess 2: EDG picks another teamfight comp. How to beat them?

Pomelo: Have to pick your own teamfight comp. to fight them head-on. If you pick a passive comp., you will get punished. I think Lulu should pair with an ADC that has mid-game power spike in terms of items.

Hostess 2: Wow Yasuo! Haven’t seen this knockup comp. for so long! I think Rookie’s favourite champion is Yasuo. Wow Jayce for Dade! These 2 mid laners are just showing off. Mid lane will be interesting to watch.

Pomelo: I think EDG is locked in first place; they are going to MSI in America.

Hostess 1: How did IG lose?

Pomelo: It’s Kid’s fault. I feel like the fans are going to flame him again. But Kid is used to getting flamed.

Hostess 1: So OMG isn’t doing well before but they recovered lately right?

Pomelo: Ya we are scrimming better now. I think Uzi and Luo is starting. Our top laner is most likely playing Lulu or Gnar, especially Lulu if not banned. Loveling plays Nidalee but also any of the top 3 junglers. Uzi might play Vayne.

Hostess 1: You should leak more like the analyst from King yesterday.

Pomelo: I can’t. My team told me not to leak any more stuff. But I feel M3 they are becoming more synergized. Their jungler is like #1 jungler on a server.

Hostess 2: Ya very good jungler. Even the coach on M3 respects the new jungler very much.

Hostess 1: What does that mean?

Pomelo: It means PYL can win even if he has a dog as an ADC, that’s how good he is as an support.  Ah M3 uses Looper as their top laner. I think they pick their starting top laner depending on who is playing better right now, not for the purpose of switching different strategies.

Hostess 2: Ah Loveling. Every time the team lose it’s almost like he is always the guy that messed up.

Hostess 2: I feel like whenever a team plays OMG they have to ban 3 mid laners. Wow first pick Kalista for M3! Candy must be so confident.

Pomelo: OMG’s Lucian against Kalista. Depends on support. Viktor for M3, really early wave clear in lane. Xiyang’s Thresh is really good. As long as he has good reaction, he can flay away Leona’s engage.

Hostess 1: Ah they can’t ban out Cool completely. Ahri for him.

Pomelo: I think Dade deserve MVP for his garbage early plays! Doesn’t use flash to dodge hooks, but then waste his flash after he got hooked.

Pomelo: Did M3 study us? Banning Lulu from Gogoing. We only practiced Lulu in scrims.

Hostess 2: Ya they are not going to ban his Gnar lol.

Pomelo: Janna for OMG. Not as much gank/roam success rate as Thresh.

Hostess 2: M3, they can play poke with Leblanc. OMG looks like they are going full engage.

Hostess 2: M3 also has engage options in Leblanc and Hecarim. They can also pick an engage jungler like Lee since they have 2 already.

Pomelo: Both teams rely on the execution of their skills. But M3’s skillshots are harder to land, thus their comp. is harder to play. They don’t have any stable lockdowns.

Hostess 2: Wait did they forget to swap in champion select? LOL

Hostess 1: Looks like M3’s mentality is broken. After Dade blew 2 “W”s to chase Janna, we can tell they weren’t trying anymore.

Hostess 2: Really not Dade’s fault this game. He took out Janna multiple times and also Uzi.