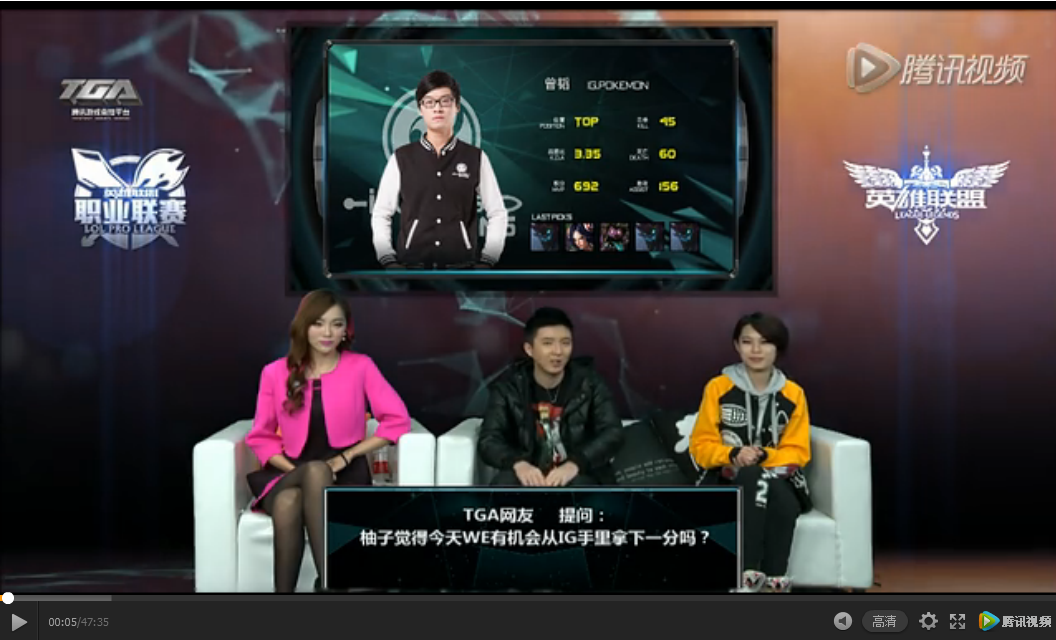 Pomelo: WE vs. IG is a classic match-up dating back all the way from Season 2. It would be difficult for WE to take down IG this season considering how well IG is doing. When can we see zzitai in mid again lol?

Hostess 2: Someone asked if there was a chance to see zztai, but at the moment the combo of Rookie and Kakao is too strong.

Pomelo: Ya because they are both Koreans. If you put a Chinese mid laner with Korean jungler they would have communication issues, especially the current meta strategy is to gain an advantage in mid lane, and have the mid laner + jungler create momentum by making plays around the map.

Hostess 2: IG feels like the old KTA: you got the Rookie and Kakao combo, and Kid plays steady like Arrow, focusing on team fights. Now look at WE, they are still using YuZhe as support. The fans are wondering when Mystic (WE’s new ADC) and The Shy (streamer) can play. Also, they don’t rate Ninja highly right now.

Pomelo: Ninja plays mid lane too passively. I talked to some mid laners, and they said that playing against Ninja in mid is more boring than hunting deer; he makes no attempt to aggress on you. All he does is wait for scaling. In the previous meta, that style works because he can just wait for gold from taking Dragons. But you can’t play passive mid in this meta and expect to perform well.

Hostess 2: But can’t he just focus on CS like Weiless?

Pomelo: Weiless is not only good at farming creeps, but he is also very aggressive in lane.

Pomelo: Veigar ban. People may not know this but in S1 I played a lot of Vegiar. Veigar must take movement speed items, which makes his laning phase weak and more suitable for a scaling ADC that can play passive, and unsuitable when paired with someone like Uzi because the lane will be constantly shoved into the tower.

Pomelo: WE takes Nidalee away from Kakao because he is very accurate with the spears. With Corki, WE is looking for a mid-game powerspike poke comp. But the Corki/Janna lane is kind of average. WE takes Ezreal for a poke comp., with Maokai+Janna for disengage. Ninja on Ezreal is going to be very boring to watch. Overall even lane match-ups, and both junglers would want to camp Kassadin’s lane. Or they can lane swap.

Pomelo: The turning point of this game is IG’s weakness in Dragon control, and poor mid game control from Kakao. He was walking in the sight of WE’s vision wards the entire time, and wasn’t able to make many plays across the map. This allowed WE to scale freely towards the mid game, where their poke comp. showed its strength.

Hostess 2: Maybe it was a mistake for WE to have Nidalee?

Pomelo: Maybe IG thought WE wouldn’t take Nidalee or they won’t play well enough. Looks like IG’s top laner is packing his keyboard, are they swapping players for the next game?

Pomelo: Congrats WE! Styz with a long sigh of relief, cracked a smile on his face. Finally after this long season we can say congrats to WE. The turning point was Spirit’s early game counter gank that resulted in 2 kills plus enemy’s mid tower.

Pomelo: Both teams are not performing up to my expectations. VG’s Mata is my favourite player. (…dirty jokes…) I feel King’s Skye is not performing like his old days coming out of LSPL, when he played very aggressive and in scrims vs. strong teams like OMG he completely dominated them.

Hostess 2: And Assassin, yesterday vs. WE played a 50 minute game with a very passive laning from both sides. King is not as aggressive as they used to be as a team.

Pomelo: Maybe this new King have something to lose after achieving so much as a rookie team, their mentality changed. Are they becoming a second WE? I think the dark horse is Snake, but they are not playing as well as they did before the (Chinese) New Year. It’s like all the teams are slacking after New Year.

Pomelo: King bans Veigar, is he really that strong??? I guess his crowd control is too good.  VG first picks Lissandra as a flex to confuse King; she is used a lot in mid right now. Skye loves Irelia and Rumble the most, but he banned his Rumble.

Hostess 2: Yes, VG is focusing on Assassin instead of Skye in the P&B phase. If Assassin performs optimally it would be scary.

Pomelo: But it’s rare to see Assassin performing well, to tell the truth no flamerino. Opps, I didn’t see Nidalee got through to the last pick. King’s bot lane Corki/Thresh is against Graves/Janna, which means VG has a small advantage in lane. It feels like all of Graves ability can pressure Corki very hard. Graves can dash into Corki’s face, not only avoiding Corki’s skillshots but also burst with his buckshot. Corki is too reliant on landing his Q ability to win trades.

Pomelo: I think all of VG played well. VG played the Dragon fight really well. King tried to kill Nidalee and blew too many flashes, and Gnar TP’d in and blocked their choke point.

Hostess 2: Their team is very good at blocking choke points with Janna, Gnar, and Lissandra. Feels like Irelia was non-existent this game. She never got her items to make an impact.

Pomelo: On a side note, the players are holding hot water bottles to warm themselves. I think they should all get hot water bags.

Hostess 2: I believe the hot water bottles are provided from the stage crew. Players aren’t allowed to bring their own.

Pomelo: Why? Because they may be doping?

Hostess 2: VG picks Maokai after waiting to see whether King plans to pick a farming mid or aggressive mid.

Pomelo: I don’t like the Xerath pick against that many engage champions from VG. King doesn’t have a strong disengage comp. to protect Xerath. Veigar is best with a stable, scaling mid. But Xerath isn’t the safest scaling champion against VG’s force engage team comp.

Pomelo: Please don’t use the English name Kalista. I always get confused thinking about the cow instead. What’s his name? Anniestar? Allstar? Alliestar!

Hostess 1: Is the cow female? I thought Allie is a girl’s name.

Pomelo: Very short games all around. The first 10 minutes is very peaceful, then they start slaughtering each other out of nowhere.  Veigar’s performance was very good. His AOE stun in the Baron pit saved his team from getting chased. Assassin’s only role is to use all his skills to delay the enemy team and wait for his team to catch up. Poor guy, I mean even his portrait before the match was messed up. On the other hand, we saw a flashback of the old King that just came out of LSPL. We used to think that King was the dark horse, better than Snake at that time when Snake wasn’t performing as well.