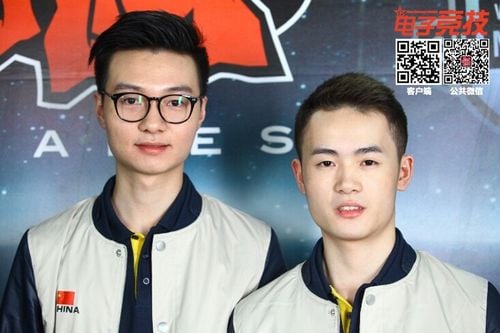 Interview with OMG LoveLing and Dada7 after they beated FNC,. Their goal is the win the remaining 4 games.

Although the road to the playoffs is not going to be easy, OMG seems very confident after they beat FNC and get their first win. The following is the interview:

Q: Gogoing mentioned in an earlier interview that Cool took Zilean mid was because you were afraid to play him [in support]

Dada7: Since FNC ran a Thresh-Lucian bot lane, I belived that we would have to play if I picked Zilean.
Q: This question is for LoveLing. We often saw you using Evelynn in Jungle. Is there a reason behind it? Is this the new game plan mentioned by TT ( the team’s coach)?
LoveLing: I used Widowmaker mainly to match with zilean. Furthermore, I am more familiar with this champion.
Q: Goging said you want to win the next 4 games.
LoveLing: All of us really want keep up the momentum by winning the remaining games.
Q: Dada7, why are you holding a hand warmer?
Dada7: The air conditioner on the platform was too cold.
Q: Has the cold affected your performance?
Dada7: It affected me on the first day. Today is much better.
Q: Dada7, there have been a lot of fans debating mistakes you made during the games. Today, you did pretty well in the game with Fnatic. Is there something you like to say?
Dada7: I listen to my coach and teammates after each game and then I try to do better in the next game
Q: Elise, the Spider Queen was not used often during the earlier groupstage, however Elise was used very often in Group C and D . Is there a reason behind it?
LoveLing: I think this is just because different team favors different champions. Junglers in LPL region usually prefer Rengar and Elise. Actually European and Korean teams are also comfortable playing Elise. I use Elise mainly when she fits well into our team compositions. I also think Elise is just a good Champion.
Q: Dada7, when Western casters mention your IGN, they usually spell the whole name. Do plan to change it to a shorter ID?
Dada7: I think I should make some changes. I did not expect them to spell out the full ID.
Q: What is the main reason that Fnatic beat SSB?
LoveLing: I think the main reason SSB lost was because they didn’t take care of their top laner and he fell too far behind. If they hadn’t lane swapped, I think that their bot lane could have carried the game.
Q: For those who follow closely OGN games realize Korean teams have good handle of the vision and tempo during the late game.
Dada7: We had a long postmortem after we lost the game yesterday. Based on this experience, we will try to minimize our mistakes.
Q: After today’s win with Fnatic, what do you think about your chances on the remaining games?
Dada7: I believe we will have above 50% chance on our remaining games.