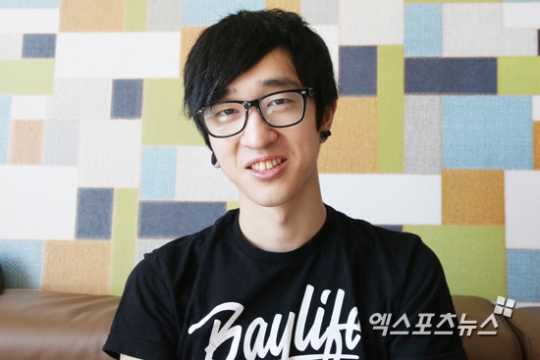 Disclaimer: All credits including photo goes to Mr. Park Sang Jin of xportsnews.com. This is just a fan translation.

As eSports expanded internally and externally, new positions were created and needed to be filled. An example of this is the coach position in League of Legends that plans out the pick and ban phase which only existed in a handful of teams. But in today’s scene, it is essential to have at least one coach on your team to succeed. Some teams even had multiple coaches to strengthen their team.

This is no exception to western League of Legends team such as TSM. The coach of TSM is none other than Choi “Locodoco” Yun sup; the player who have played with TSM, MiG, StarTale, CLG, Najin and Quantic gaming. Recently, he has retired his position as a player and took up the role of TSM’s head coach.

His bot lane partner during his MiG days, Hong “MadLife” Min-Ki, used the phrase “ChunBangJiChuuk”* (roughly translates to someone who is wild, reckless and scatterbrained). But Locodoco as a coach during the interview was more calm and collected.

Reporter: How is life as a coach compared to being a player?

Locodoco: I’m still involved in League of Legends but it feels different compared to when I was a player. Being a coach is both boring and relaxing than being a player. But the level of stress is still the same.

Reporter: How much do you think you contributed to TSM going to the world championship?

Locodoco: I wouldn’t say I had 0 contribution (laughs). But TSM is a consistent participant at the world championship so I’m not surprised TSM made it again this year.

Reporter: How do you rate yourself as a coach?

Locodoco: I’m young and have no experience as a coach. I am also immature (smiles). I still need to learn more about being a coach and change to improve myself.

Reporter: How would you rank TSM in the NA LCS right now?

Locodoco: This season was one of the hardest. Back in season 3, we gave up the title of being the strongest team in NA to Cloud9. Fortunately, we reclaimed the title in Season 4, but with the teams bolstering their roster with new players, it became harder to win. Also because of the new addition of coaches, the mind games with the other team’s coach was also a struggle. But I strongly believe that TSM is still the number one team in NA and even if we include teams from other regions, we’d be still be contender for the number 1 spot.

Reporter: How do you feel about the group draws for Worlds?

Locodoco: For TSM, the group draw is the absolute worst. We were placed in an easy group as the first seed in the last world championship and people used that an excuse to how we proceeded to the quarter finals. If we make it to quarters this year, it will be because of our skill and not luck.

Reporter: How do you feel about being in the same group as LGD and KT Rolster?

Locodoco: They are teams I watch closely because I am friends with the players. LGD deserves the title of being the number 1 team in China. I am especially fond of Koo “Imp” Seung Bin’s play. There is a concern for Chinese teams with Korean imports in terms of communication that could arise during a big stage like the world championship, but the fact that they made it to world’s prove they have overcome that problem. To summarize, LGD has solid fundamentals with the carry potential of Imp.

As for KT, having Kim “Ssumday” Chan Ho and Lee “Piccaboo” Jong Bum alone makes them a threat. When we scrimmed with KT before, those two gave us the most trouble. Piccaboo is known as a player who spends a lot of time analyzing the game which is reflective in his sharp roaming plays. Kim “Nagne” Sang Moon, who is a close friend of mine, transitioned well from the jungle to the midlane and put out a solid performance. Noh “Arrow” Dong Hyun did not perform as well in recent matches but I believe that he is a good ADC.

Reporter: What are your thoughts on SKT and KOO Tigers who are also participating?

Locodoco: SKT is the strongest team out of all the other participating teams. Many teams have the laning phase as SKT, but none of them can operate the way they do. Lee “Faker” Sang Hyuk, Chang “Marin” Kyung Hwan and Bae “Bengi” Sung Woong have improved a lot this season and are one of the best at their roles. In terms of player strength and game operation, no one can match up to SKT.

On the other hand, KOO Tigers is not a team known for their individual strength. I’m not saying the players are bad, but the players in each position are not the best either. The only exception would be Kang “Gorilla” Bum Hyun. I personally think he is a very good player. KOO Tiger’s strengths are quick adaptation to new patches and are not afraid to try new things such as new team compositions. I think their performance will depend on how quickly they can adapt to the 5.18 tournament patch.

Reporter: If TSM made it to the finals, which team would meet you there?

Locodoco: LGD, SKT or EDG would be the ones to make it the finals. The goal is winning the world championship but I think it is too early to look that far ahead. Right now my focus is making it to the quarter finals.

As for groups, I think one of LGD or KT will join TSM out of group D. The team we fear the most is LGD, but their game plan is centered on Imp. Whether it be ganking or engaging, everything is centered on Imp which makes them a real threat.

Reporter: What do you think about patch 5.18?

Locodoco: I don’t expect any game changing changes. There are little buffs and nerfs here and there such as the changes to Morderkaiser and Gangplank. I expected the Lulu nerf as it was pretty obvious. I also expect Twitch and Syndra to be picks during the world championship due to the buffs they have received. This patch will allow for different gameplay styles to be shown.

Locodoco: Yep. But I can’t say because we need to use it (laughs).

Reporter: Is there a Korean player you are watching closely?

Locodoco: I watch a lot of the LCK and Ssumday stands out the most for me. Top laners are divided into carry and utility types. For example, Lee “Flame” Ho Jong of LGD is a carry type top laner who can play Jax, Irelia as well as champions like Kennen and Shyvanna who can split push effectively. On the other hand, you have players like Choi “Acorn” Chun Joo who plays Rumble, Lulu and Maokai, who are more of a utility type top champions. Ssumday can effectively play both of these top lane playstyles.

Reporter: Any final words to end this interview?

Locodoco: I think many Korean fans dislike me for being a “ChunBangJiChuuk*” (laughs). I am thankful to fans who still love and support me nonetheless. I will do my utmost best to bring good results during the world championship.

*The actual phrase is????, so feel free to look up the actual definition. The one I provided is a very loose translation of the phrase.