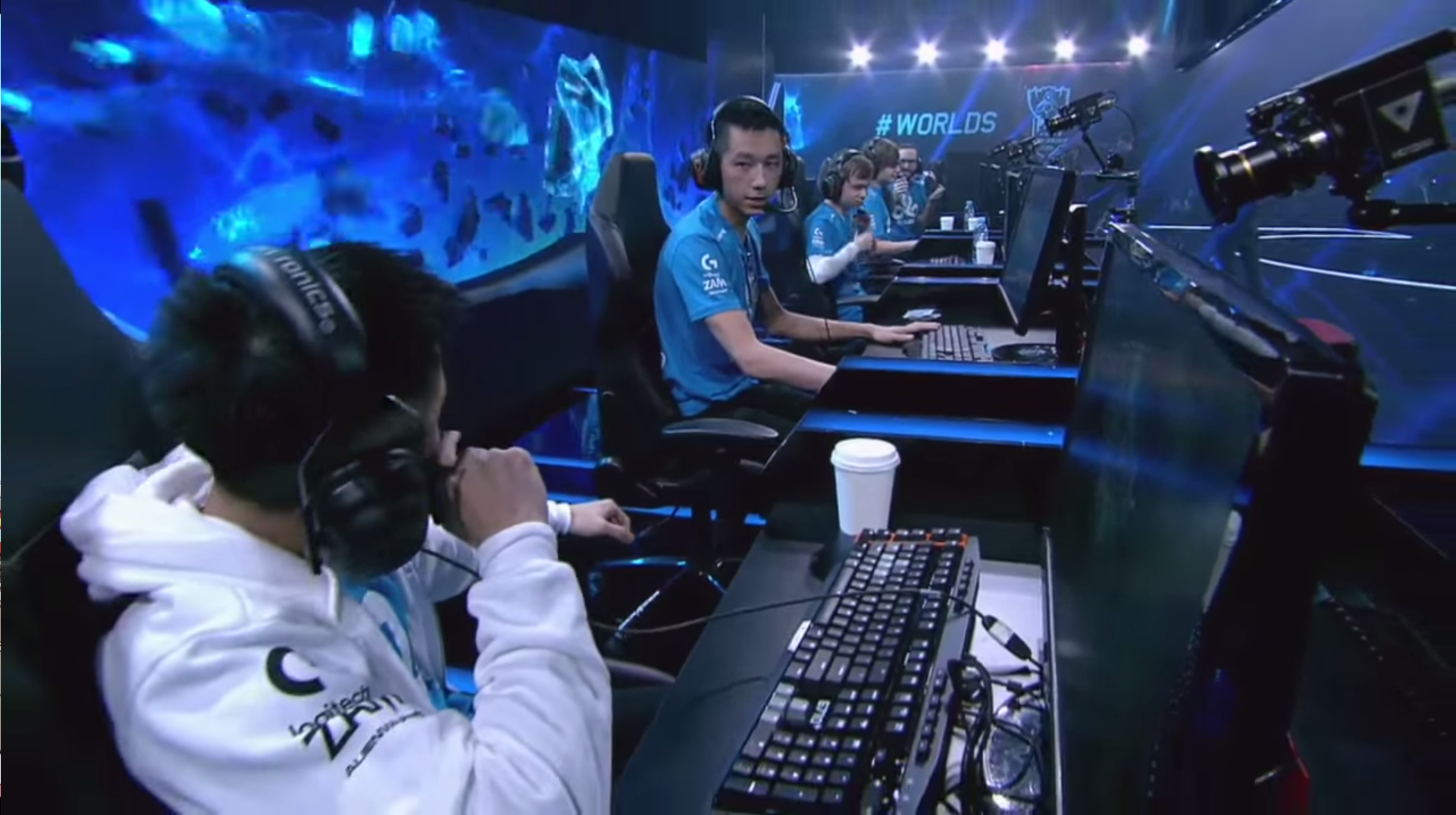 Like a thunderstorm rolling in on a forecasted sunny day, Cloud9 have upset all predictions of their World Championship performance by going undefeated in their first week of the group stage. Given their almost anime-like story of narrowly avoiding relegations and running through the North American League Challenger Series Regionals from the bottom seed, nobody anticipated Cloud9 winning a single game in a group with the likings of Europe’s first seed Fnatic, China’s third seed Invictus Gaming, and Taiwan’s first place ahq e-Sports club. Yet they did, in part of massive improvements with Hai’s jungling, the use of a specific composition, and smart play to help Top-Laner An “Balls” Van Le recover from early deficits. This is the waltz of Cloud9 in their Cinderella run.

Coming out of retirement to fill the jungle role, Hai “Hai” Du Lam has been simultaneously praised for guiding C9 through the gauntlet and criticized as a jungler. While his ability to shot call and to give C9 a team identity have always been fundamental in their victories, his play as a jungler was suspect. In the LCS Regionals, he floundered with a questionable Amumu pick in the first games against Gravity and Team Impulse. His champion pool was out of place with the rest of the world, as he defaulted onto a locally successful Shyvana pick and brought out Kha’Zix, an old staple pick for him as a mid-laner.

Given the level of play in NA and his own shortcomings, most assumed that Hai would not find success on the World’s stage against stronger junglers such as Lee “KaKAO” Byung-kwon. However, we have not seen Hai afk farm on Shyvana, but proactive Elise and Lee-Sin play. Hai’s champion pool has not only expanded to include meta junglers, he is also mechanically proficient on them. His Lee-Sin, in particular, has been quite good as he has executed dives and used Lee-Sin’s versatile ultimate to engage with the quintessential “Insec,” and successfully disengage.

Though Hai’s pathing is predictable as he has starts on the opposite side of the map of his AD Carry Zachary “Sneaky” Scuderi, and spends a majority of his time between the mid-lane and bottom lane for Dragon control, his play has vastly improved from the NA Regional and is not exposable as previously thought. Hai’s selfless play to ensure his teammates have the resources they need to succeed, his vision control both when aggressing and playing defensive, and his acceptable mechanical execution on meta junglers has demonstrated Hai has come into his own as a jungler.

While the Meta at the World Championship has been all over the place, Cloud9 are cemented on siege compositions. In all of their games at Worlds so far, Balls was placed on a safe top-laner who can farm and be useful later in the game, Hai uses an early-game aggressive jungler, Nicolaj “Incarnati0n” Jensen plays a mid-laner with powerful wave-clear and zoning, Sneaky wields a fast tower pushing ADC, and Daerek “LemonNation” Hart locks in a peeling support.

Balls played Gankplank against ahq, due to it being too strong to give away. In the other games, Balls was placed on Darius, the most popular of the juggernauts. With simple aoe damage and reliable tankiness, it is a safe pick for Balls to play since it does not pressure him to acquire leads. Meanwhile, Incarnati0n played Veigar and Azir, both of whom offer monstrous siege with the zoning from Event Horizon and Sand Soldiers, respectively. Sneaky played Tristana in every game, as the champion gives him remarkable play making potential and maximizes C9’s damage on towers with her Explosive Charge. LemonNation opted for Morgana when it is not banned from in, and otherwise used Braum. This style of composition, which places the pace of the game into Sneaky and Incarnati0n’s hand, is the fundamental core of C9.

C9 did the same style of lane swap in each of their games: they give Sneaky a solo lane to farm in while Lemonnation recalls to lane with Balls. At the five minute mark, Balls and Sneaky recall to switch positions into standard lanes. With the solo lane experience and early recall, Sneaky has a level and item advantage over the enemy ADC, allowing him to bully his lane and push it into the tower. Meanwhile, the early duo lane with LemonNation gives Balls enough levels to survive the 1v1 against the enemy Top-Laner.

Hai’s jungle pathing focuses on keeping Incarnati0n safe by warding around the mid-lane, with priority placed on the Dragon side. Should Balls be targeted, Hai will make a gank in one of the side lanes and involve Balls. For example, in C9’s game against IG moments after Balls is killed by KaKAO and Zzitai, Hai ganks bot and has Balls teleport into the lane to pick up the assist. Not only does this help Balls recover with extra experience and gold, it prevents Zzitai from snowballing his advantage to the bottom side of the map by forcing his teleport. Simultaneously, Hai prevents Balls from falling too far behind and protecting Sneaky from losing due to that disadvantage in the top lane.

As mentioned earlier, Sneaky’s advantage from the lane swap lets him take control of his lane. Sneaky is enabled further with Hai’s warding on Dragon side, which typically aligns with Sneaky’s arrival in the bottom lane. Alongside LemonNation’s standard warding once he acquires sightstone, Sneaky is safe to trade aggressively and force waves into the tower, resulting in early tower kills. Against ahq, he took the tower around the twelve minute mark; against IG it was thirteen minutes when he took his tower; in the Fnatic game he took the tower at six minutes since he was solo laning in the bottom lane.

Once the bottom tower is gone, C9 periodically have Sneaky shove the wave and rotate him into the mid-lane to siege. This is simple to do since Incarnation has zone control with Azir or Veigar. When the mid tower falls, C9 generates more pressure by shoving the wave before they rotate into an early dragon. This is evidenced in their game against Fnatic: as Fnatic start dragon, C9 immediately force them off the objective with aggressive posturing, followed by attacking the mid tower. Fnatic are forced to fall back and defend, since Tristana and Azir could take both mid inner and outer towers in the time Fnatic would spend killing Dragon. C9 take the outer tower anyway, use the Azir passive to bottle-up Fnatic in mid, and take the Dragon for themselves.

C9’s pressure game is instrumental in helping Balls scale into the mid game by forcing enemy teams to bring their top-laner down to combat their sieges in mid. This frees Balls in the top lane to push towers and acquire extra gold to help him recover from deficits. Against IG, after Balls falls behind Zzitai in the top lane by 60 cs and two levels, he  recovers when Incarnati0n and the bottom lane force down the outer tower and threaten the inner tower at mid. Zzitai is forced to teleport in to save the tower, push out the wave, and rotate to the Dragon to prevent C9 from taking it. As this occurs, Balls and Hai quickly take the top inner and outer towers, funneling the gold into Balls. Pressure plays like this are seen in all of C9’s game and are pivotal to keeping Balls relevant in the game.

This has been the goal of every composition C9 has played at worlds so far. They snowball Sneaky’s lead in bot with towers, generate lane pressure by taking towers and then rotate into taking Dragons. As the enemy attempts to contest, Balls is given much needed time alone to catch up in levels and cs by farming and taking towers. This playstyle lets Cloud9 compensate for their weaknesses by playing to their strengths, and is the main reason why they have been undefeated in the group stages.

How to Beat C9

No team has banned away Sneaky’s Tristana or denied Incarnati0n a strong siege mid-laner. The first step to beating Cloud9 is to do so, as it will force C9 to play a different composition. Whether or not C9 can play different comps has yet to be seen, but it is clear they can play this one to great effect and therefore they should be denied it and forced to play something they may not be as strong with.

Another approach to beating C9 is to gank Sneaky. So far, Sneaky has been left alone in the lane swap. Fnatic, for example, allowed Sneaky to farm in the bot lane while they pressured the top tower to deny Balls minion waves while giving Heo “Huni” Seung-hoon an advantage over him. This proved fruitless as Hai’s counter gank top and C9’s snowball from Sneaky reversed the damage done to Balls. But, if Sneaky were to fall behind and was unable to pressure the bottom lane, the core of C9’s snowball would be disintegrated. The games which C9 struggled the most in during the Regionals was when Sneaky was camped. Team Impulse’s Lee “Rush” Yoon-jae ganked Sneaky often in the two games they won. When they left him alone to farm or fed him kills, C9 would win with Sneaky’s able to push his advantage.

This principle of denying Sneaky should hold true at worlds. With no advantage for Sneaky, there is no rotating him to the mid-lane for siege, which means there is no pressure to relieve Balls. To help Sneaky get control back, Hai would be forced to directly gank the lane. With Hai forced to tend to the bottom lane, Balls would fall behind on his own accord given his current performance level, and teams with strong top laners can properly snowball from there.

The Meta for the World Championship may be top-lane centric, but C9’s play is bottom lane centric; likewise, teams playing against C9 should prioritize stopping C9’s Bot Lane rather than bullying their Top. By doing this, teams are guaranteed to cause at least two of C9’s lanes to lose and deny C9 their usual mid-game strategy. Assuming C9 has no other compositional approach prepared for Worlds, this could be the approach to finally dispel the magic of C9’s Cinderella run.