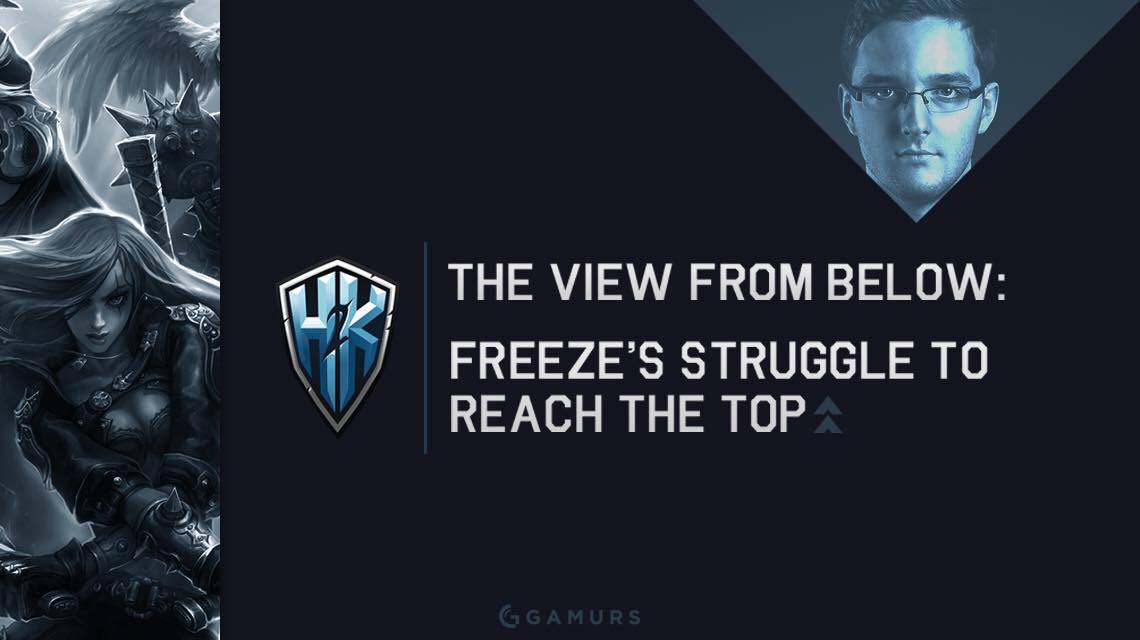 H2k-Gaming closed in with an 8,000 gold lead, three drake buffs empowered by the Aspect of the Dragon, and the Hand of Baron against Origen in week five. Aleš “Freeze” Kněžínek secured a quick triple kill during the push to destroy the nexus. H2K tied the series. His lips pursed in displeasure, Freeze removed his headset and reached for his water. Was H2K’s lackluster performance on his mind? Was H2K’s disappointing record?

Or the pain in his arm?

The first sign was a glove on his right hand–he didn’t wear one until this split. Then, he came into the Origen series with kinesio tape stretched over his forearm. “I must take Ibalgin three times a day to play,” Freeze explained in a Facebook post. Ibalgin is a drug with the ingredient Ibuprofen: it’s a painkiller. “The frustration from feeling that you want to play another game but you cannot is awful. I am going to physiotherapy twice a day, and it is not really helping, but at least I am feeling like I am doing something.”

Injuries are a blow to any competitor’s career. Cases like Olof “olofmeister” Kajbjer Gustafsson from CS:GO or Gonzalo “ZeRo” Barrios from Smash 4 demonstrate as much. But for Freeze, this situation is another twist of what is dubbed “The Freeze Curse.”

As a talented AD carry, Freeze proved himself a top LCS level talent through his wide champion pool accessorized with deadly pocket picks, immaculate teamfighting, and consistency. However, he was burdened by the heaviest of teams: with Ninja’s in Pyjamas and later Copenhagen Wolves, Freeze was eliminated in the first round of LCS playoffs twice, relegated twice, and trapped in the Challenger Series for splits.

Seeking new fortune, Freeze went to North America in 2016. But even in a new country, playing under the Renegades’ banner, Freeze found no relief as visa issues kept him from playing for a week, the roster fluctuated as some players left or were replaced. Relegation once again snatched Freeze, but this time he clawed through, at least avoiding another intimate session with the Challenger Series.

In the summer offseason, H2K approached Freeze. Konstantinos “FORG1VEN” Tzortziou-Napoleon and H2K had parted ways. H2K could use an AD carry of Freeze’s caliber. “(I had) this feeling inside of me that… I’ve never won anything,” Freezesaid in an interview. “I’ve always been in relegations, which is super sad for me and I just wanted to prove that I am worth being the best in EU and qualifying for Worlds.”

The decision was simplified when Renegades allegedly chose not to keep Shin “Seraph” Woo-yeong and Noh “Ninja” Geon-woo, two of the players that had reinvigorated the roster in the second half of the split. With his preferred teammates gone, Freeze saw H2K as a team with a skill ceiling as high as his: “If I play well, then the team will play well,” he remarked. The opportunity excited him for the prospect to carve a new legacy for himself.

He returned to Europe, where a team deserving of his talent and sharing a similar past of letdowns awaited. Historically, analysts praised H2K for the macro-play coach Neil “PR0LLY” Hammad instilled. But, when it came to playoffs, it stumbled on shaky calls, unusual dyssynergy, and individual under performances. Even adding FORG1VEN didn’t change that. By acquiring Freeze, H2K brought a player and a team with aging burdens together. Would they prop themselves on one another’s shoulders to obtain the legacy they longed for, or would the combined weight of their pasts bury them?

The journey is not going so well. While fourth in the standings, H2K has not performed to expectations. While it’s done well against the top team in Europe, it’s yet to perform convincingly against teams beneath it in the standings.

“I would kind of like to know now that we suck and not later, PR0LLY remarked about his team. “I really want to be an undisputed strong team, rather than be like ‘we can only play X,’ so we just do this all the time until someone bans it out and then we’re the worst team in the world.” That desire influenced PR0LLY to change his coaching approach to promote in game adaptability, which reflects in H2K’s variety of compositions. While this will (hopefully) improve H2K in the long term, the short term consequence are problematic.

H2K’s member’s aren’t on the same page at times: when it played Giants in Week 2, Marcin “Jankos” Jankowski was caught in H2K’s blue side jungle. While other members postured, Freeze went to the bottom tower to catch a wave, and perhaps finish off Na “NighT” Gun-woo. Just as H2K was forced back, Freeze immediately attempted to all in that failed. Left alone under tower, he was dove.

H2K’s early game has taken a step back. It now averages a 506 gold lead, as opposed to its 1,371 from spring. Jankos’ decrease in first blood rates may have something to do with this, as the decline in pressure doesn’t give H2K as much of a snowball as before.

The most egregious statistics are Freeze’s damage. With an average of 468 damage to enemy champions per minute and 24.2 percent of team damage, Freeze outputs the lowest damage of all EU AD carries currently playing. It’s perplexing: we’ve H2K snowball his Draven to great effect. His Lucian has masterfully kited around teamfights, jumping in to assassinate the enemy backline at the perfect moment. Freeze is a good player, so why is his damage so low? Four factors drag down his stats: first, the overall meta of AD carries calls for them to serve a utility role rather than straight damage. While he’s low in the league, many other AD carries are also in the 400’s in average DPM. Secondly, he outputted less than 300 DPM in two separate individual performances, one against G2, the other Unicorns of Love. Thirdly, H2K opts into split pushing while it wave clears to stall for objectives. Freeze is often delegated to wave clearing, meanwhile his teammates leave him to pursue a pick. Being left out of the action naturally decreases his damage output.

Lastly, Freeze’s physical condition. An injury to the arm, constantly seething in pain, is debilitating to performance, and distracts from the minimap, callouts, wards, cooldowns, positioning, and pressure. It’s frustrating: Freeze said as much. How unfair must it seem to him, that when he joined a good team, he physically can’t perform at his usual level. He can’t practice as hard as his motivation drives him, leaving him alone with bitterness as he tries to rest at night. Simultaneously his team adjusts to a new coaching approach. Just when it H2K takes a step forward, it trips backwards: a miraculous comeback against FC Schalke 04 is forgotten after a crushing loss to Giants the next day.

To echo PR0LLY’s sentiment, the only respite is that Freeze’s current problems are occurring during the regular season. The playoffs are still weeks away. That is precious time for his arm to heal, for his team to improve, so they can stand together and deny the curse. For now, Freeze’s struggle continues.

All statistics collected from Oracle’s Elixir on July 11th

This feature was published before H2K’s news of FORG1VEN returning.