The third issue of Riot Games’ Lux comic is out now

There’s no turning back now. 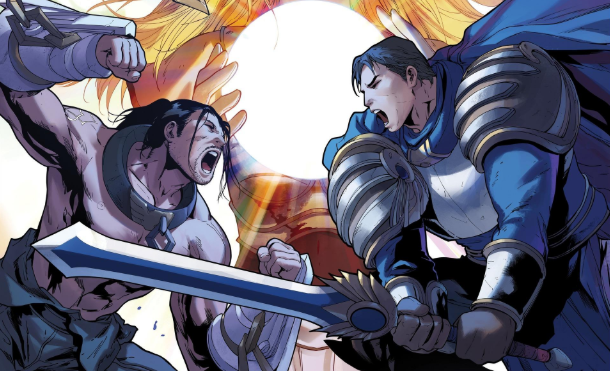 The third issue of Riot Games’ Lux comic is here, and things have finally hit a boiling point.

The first two issues explained Demacia’s dense fear and hatred of magic and how Sylas and Lux became friends thanks to their shared powers. But Demacia’s hostile attitude against magic is finally starting to catch up to Lux in today’s issue.

While attempting to sneak down to Sylas’s prison cell, Lux is confronted by her family. They deny her access to the Mageseeker Compound and prohibit her from leaving the house. As punishment, they plan Sylas’s execution for the next day.

After learning of Sylas’s execution, Lux uses her magical capabilities to bust a hole in the wall of her house so she can escape. She makes her way to the plaza and puts a stop to Sylas’s public execution by explaining her friendship with the prisoner to the crowd and stooping down to give him a hug.

Luckily for Sylas, however, Lux’s touch turns out to be just enough magic to allow him to break from his bonds. He absorbs her beam of light, using it to wreak havoc on the plaza and any nearby Demacians. While Lux tends to injured citizens, Sylas gathers other jailed mages and vows to destroy the city.

Garen then charges in, and the two began to fight: Garen with his sword and Sylas with his chains. There’s seemingly a limit to Sylas’s powers, though. He tries to conjure more magic, and his chains fail him. Garen gets the upper hand, and just when it seems like duel is won, Sylas regains control over his magic and strikes the Demacian officer down.

The comic then cuts to Garen lying on a doctor’s table, surrounded by Lux and other high-ranking Demacian officials. Lux explains everything she has learned about Sylas and his powers, pointing to the petricite in his bonds as his source of strength and why he’s able to absorb powers from those around him.

Before the comic ends, the group reaches a shocking conclusion: Sylas isn’t planning on fleeing the city to safety—he’s headed to Demacia’s petricite-filled palace to kill the king.

Fans will find out what happens next when the fourth issue of the series releases next month.