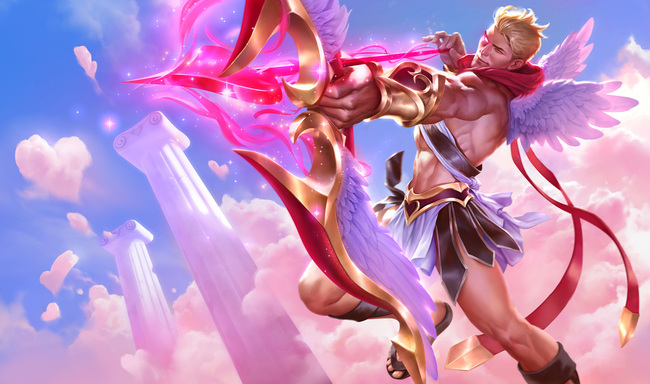 Hi fellow summoners, LCS fans, lovers, and singlets! Varus the Cupid has descended upon us to rain chaos of attraction and affairs. As the LCS season begins to unfold, so do many forms of associated desires and feelings, some platonic and some not. Whether you prefer the handsome stud, the boyishly cute, or the rugged mature, the various heartthrobs of the LCS got you covered. Cupid Varus does not miss the mark; should you be stricken by his hearty point, this guide will help you navigate through the true fantasy of the LCS.

Now, let’s look at some of the best that the LCS has to offer.

Just like the magnificent Greek God and his namesake, Apollo (formerly known as Wizfujiin) is a gorgeous manifestation of male beauty. His defined and broad features radiate from his masculine image, explaining the meaning of handsomeness. Apollo is a fine example of the western dream guy and is well capable of claiming victims for the Cupid.

No discussion of studs can pass without mentioning Balls. Despite his adorable looks and boyish stature, he is perhaps the most built player of the entire LCS. He is dedicated to fitness as much as he is to his LCS career. Balls represents the hardcore gamer with the fitness dedication of of an athlete, at a much desired but rare intersection. C9 truly has Balls of Steel.

The rising LCS star is not only an attractive bachelor, but also a pharmacist-to-be and the owner of a degree from my own revered school, UC Berkeley. Beyond his fierce LCS career, Calitrlolz is a studious character with lifelong goals. Gamer, academic, and stud, Calitrlolz can be the total package.

Hylissang is one of the fabulous Unicorns of Love who took the EU scene by storm, entering the fray on his majestic horned steed. He resembles the dark haired, fair knight who arrives to help when needed. As the backbone of his team, Hylissang provides the support they need to achieve victory.

Yellowstar is a truly inspirational character. Anyone who has watched the EU LCS in the past has noticed the dramatically positive changes that Yellowstar forced upon himself over the recent years. Now having achieved his physical appearance goals, Yellowstar begins the LCS season with newfound self-esteem and fierce attractiveness. To call him anything less than a handsome stud would not do him or his efforts justice.

Disclaimer: Unable to include sexPeke since he is currently retired from the LCS

Bjergsen is known as the feared midlaner of TSM, bringing much respectable skills onto the LCS table. Once off the stage, he is known to be fierce, goofy, trollish, and of course rather adorable. The European youngster has garnered countless fans in a short amount of time after his entrance into the NA LCS, but how can he not with those cute looks?

Hai is the heartthrob of many, many fans; men and women alike have expressed desires of wanting a chance to include this irresistible Vietnamese in their life. Hai brings an unique anime-style appearance to the LCS, stealing the hearts of fellow geeks, myself included, who share his fantasy.

World champion and one hot Korean, Piglet claims to the best Marksman of the NA LCS. His fierce attitude and sexy visage are no certainly no secrets in the LoL esports community. Piglet once ruled the competitive LoL world along with faker in their prime days of SKT T1 K. While those days are seasons past, Piglet’s fierce cuteness isn’t and the degree of his attractive is comparable to the size of his legacy.

Smug, confident, and sexy all over, PoweOfEvil is all the (sh)rage of the Unicorns of Love. On the fields of justice, he shines like a star with his flashy plays and his top-notch mechanics. More that that, however, are his swag-licious expressions that supplement his already sexy combo of handsome and cute.

Reignover reigns as the king of LCS cuteness. He is the quintessential boyish heartthrob who represents the Cupid’s innocent youth. His hair, his smile, and his smooth appearance makes him an irresistable target of a hug.

The former young star of Fnatic is now the young star of Elements. Rekkles has always been everyone’s adorable pro. Similarly to Bjergsen, Rekkles employs the boyish cute looks in the LCS. While Bjergsen has moved to NA, Rekkles remains EU’s young, cutie heartthrob.

Note: Since the LCS has a sizable population of cuties, this list is not exhaustive (see: the entire Winterfox roster).

The smooth-faced, lush-lipped member of CLG complements the unstoppable Rush Hour combo. His signature stubble cannot be missed and completes his mature look. His large stature along with smooth features seem to combine masculinity with experience.

If anyone in the LCS is the face of the “rugged, mature” style, it has to be LemonNation. The longtime C9 support features wisdom, maturity, and hotness in one. He would be the one to take a passionate but also an analytic approach to situations. He is the experienced, dependable desire for those stricken by Cupid.

Just look at him: photogenic, masculine, defined features, and confident. Known for his terrorizing Solo Queue dominance, even with unorthodox picks, Quas’ “game” does not end there. This Latino stud, who can easily pass for a model, has no doubt already claimed the hearts and desires of many fans around the world.

Meet THE beefcake of the LCS – the infamous Saintvicious with a very built body and a mature facial appearance. Anyone who is into the muscular will not discount for Saint’s gorgeous body. For 5 seasons of League, Saint has been the object of desire for those who seek the distinctively masculine.

Whether you’re looking for the young boyish cuteness or the rugged masculinity, may the Cupid Varus grant your Valentine wishes and fulfill your deepest, truest LCS fantasies!~