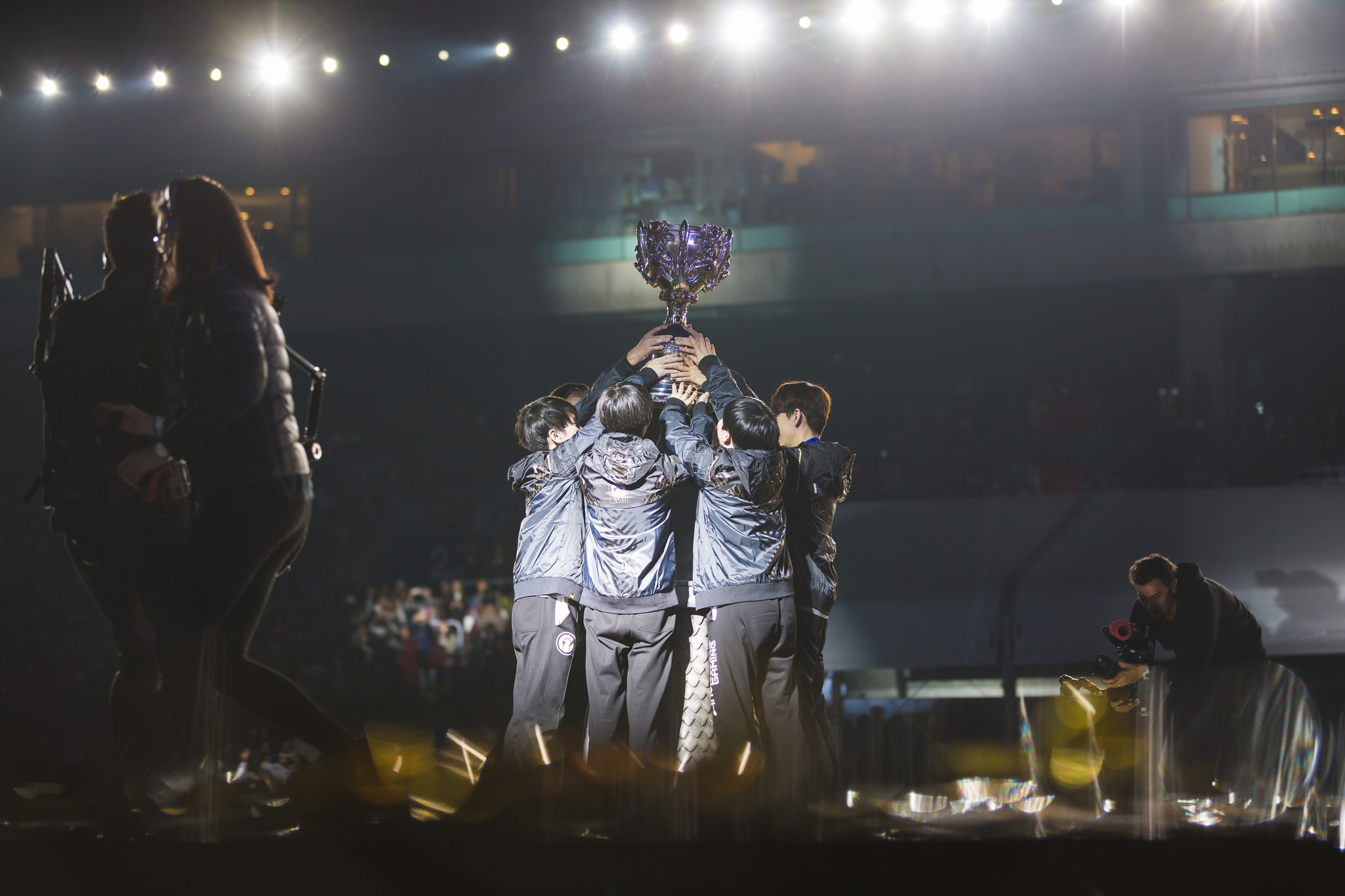 The 2018 League of Legends World Championship has finally concluded, and the after party has officially begun. League fans are now busy slapping Riot’s new pop anthem POP/STARS on repeat and spending their in-game Worlds tokens on the Prestige Kai’Sa skin.

As for us, yeah, we’re doing all of those things. But we’ve lamented over the final three games of the competitive season, too. The LPL’s Invictus Gaming brought home the first Worlds trophy for China after stomping Europe’s Fnatic into the dirt. And it certainly was a stomping because Fnatic didn’t look like they stood a chance. IG effectively made them look like C9 did in the semifinals. The gold leads were immense, the kill count looked more like a slaughter, and even though it was an extremely exciting three games for China, it was boring to watch.

So what happened? The dominoes were set—this was supposed to be an extremely competitive series. But instead, we got SK Telecom T1 vs. Royal Club from 2013. It was a 3-0 blowout, slam dunk, or whatever else you want to call it. Did IG play super well, or did Fnatic just face-plant? Honestly, it was a little bit of both. IG played really well, and Fnatic played poorly, and we think we know why.

Fnatic had been unstoppable throughout Worlds up until this point, leading their group and then taking 3-1 and 3-0 victories in the quarterfinals and semifinals respectively. Not to mention, they had also won two out of three games against IG in the group stage.

Each team played a completely different style, too, from how IG played in groups to EDG’s teamfight-oriented comps to Cloud9’s… whatever it is Cloud9 were trying to do. The only style Fnatic hadn’t beaten? Their own, and that’s exactly what Invictus used to take them down.

Specifically, we need to highlight two areas that IG focused on in their series against Fnatic. Both jungler Gao “Ning” Zhen-Ning and bot lane carry Yu “JackeyLove” Wen-Bo, the two roles that were supposed to lose to their Fnatic counterparts, stepped up in particular. Fnatic’s jungler, Mads “Broxah” Brock-Pedersen, had garnered a reputation at Worlds for picking a lane, camping it into a big fat snowball, and unleashing that lane onto the rest of the map. Ning did exactly that, and just like Fnatic had leaned on Martin “Rekkles” Larsson to carry when Caps couldn’t, JackeyLove carried Invictus.

The difference in IG’s strat, however, was that both top laner Kang “TheShy” Seung-lok and mid lane Song “Rookie” Eui-jin were all-around better than their competition, Gabriël “Bwipo” Rau and Rasmus “Caps” Winther, despite the pair having a very successful 2018 season. So when Ning picked a lane to camp, be it top, mid, or bot, IG were able to use that lane to crack open the rest of the map just as Fnatic had done so many times before. Except, unfortunately for Fnatic, they did it better.

In game one, Ning ganked Caps twice between minutes nine and 13, effectively shutting him down and allowing them to push Fnatic back to their inhibitor tower before the laning phase even ended. In game two, Bwipo was the target as Ning pushed him to an 0-3 record between minutes five and 11, once again shutting down a carry and this time allowing TheShy to bring the pain on the other lanes. Broxah didn’t have an answer for it in both games, and JackeyLove kept Rekkles at bay so he couldn’t make up the difference, either.

By the time the third game started, Fnatic looked demoralized and broken. Every lane lost by a fair margin, aside from sub top laner Paul “sOAZ” Boyer, but even he was down by around 15 farm at 15 minutes. Fnatic had been beaten at their own game, and they just didn’t look like they knew how to handle it.

For EU LCS fans, we understand that you may be disappointed. Fnatic were this close to bringing home the first Worlds title since season one. But hold your head high, because this is the closest you’ve been since then, too. Besides, IG certainly had enough on the line to make their win extraordinarily exciting, especially being China’s first world champions. Let’s all try to be happy that a truly incredible team earned the win, and it wasn’t a Korean team for the first time in a long time.

Next year, who knows what will happen. Fnatic might make a comeback, China might defend their throne. Or, if we’re lucky, we’ll see the miracle return of the Demon King himself. It’s a great time to be a League esports fan, so bring on the 2019 season.