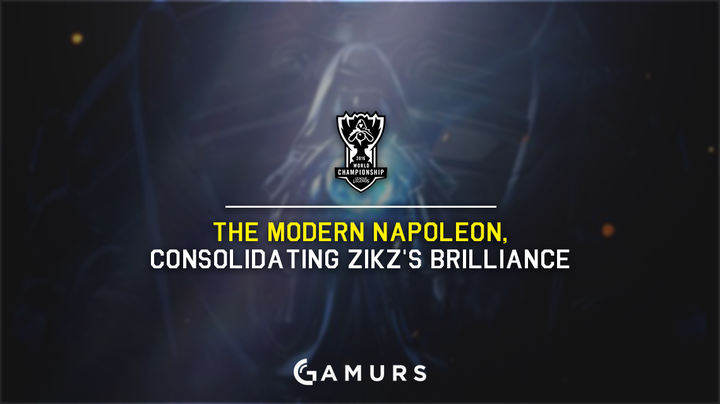 By the time Tony “Zikz” Gray became the strategic coach of Counter Logic Gaming, no one believed in them anymore. I didn’t believe anymore. CLG had, over the years, degraded. Going from being one of the best teams in the world to a team of chokers that was barely able to hold it together in the playoffs. None of the members that had given the organization its last first place in a LAN event (MLG Raleigh in 2011) were still on the roster, and it seemed as if it was doomed to forever swim between North America’s middle tier LCS teams. Then Zikz happened.

The 2015 Summer Split ran in a similar way as the Spring Split; that is, having a hot streak at the start and then hitting a concrete wall, nothing seemed to be different. They started their slump even sooner, but things were not going to stay that way for long. CLG ended up losing a tiebreaker to Team Liquid for first place in the regular season. This time in playoffs CLG did not choke, instead absolutely smashing opponents Team Impulse and Team SoloMid, obtaining 3-0 victories over both of them and claiming the LAN victory they had been chasing for so long. Finally, star ADC Yiliang “Doublelift” Peng got to hold the title of champion he had been denied for so long since joining the team.

Although the games against KOO Tigers were not as big of a missmatch as one could expect, the Season 5 World Championship would start the now established trend for CLG: dropping games to wildcard teams. Even though no one can claim this as something to be proud of, it is undoubtedly an indicator on how big of a role Zikz plays on CLG’s performance.

So much of their strategy is built on predictability, assuming their opponent will take reasonable action. That is why wildcard teams have become the bane of CLG. If you face a team better than yours in a best-of-one format, you must throw some curve balls if you expect to succeed (for a masterful example and execution of this idea, check out the first CLG vs ROX Tigers game of the 2016 World Championship).

If you are better than me at this game, I must break it and make a new game, where now I have the advantage of knowing what is going to happen and you will be forced to improvise a solution. In this new game, strategic strength loses effectiveness and mechanical skill becomes more relevant. Unicorns Of Love run in the 2015 EU LCS Spring Split is a perfect example of this concept and the fact that CLG suffers so heavily from it and is not able to adapt is often both a testament to how strategy-reliant they are and how much of the team’s strategy doesn’t come from anyone actually in the game.

After Season 5 Worlds, Doublelift is kicked from the team and Eugene “Pobelter” Park leaves, not wanting to share his midlane position with Choi “HuHi” Jae-hyun, so Huhi becomes the starting fulltime midlaner and they pick up Trevor “Stixxay” Hayes to start in the ADC position. Even when it was not obvious at the time, the team was now in bad shape. They reached IEM San Jose finals due to an easy bracket and then were swept in a 3-0 series by Origen who, even when at the time were supposed to be the next European powerhouse, ended up falling flat the whole Spring Split until the playoffs.

With two of the most veteran players out of CLG and two rookies in his hands, Zikz gots his hands into all he needs to succeed: a team that will let him do whatever he wants. That is why, for the 2016 NA LCS Spring Split, CLG almost always presented most of the optimal choices to play the meta of the moment. Often times, we will also found Zikz playing with the possibilities and exploring the limits of the team on stage.

The brilliance of it is almost lost in its simplicity once the idea is explained, but identifying the team’s capabilities and choosing the optimal way to play balancing the meta and your resources is by no means an easy task.

Even when they got great results during regular season, being the only team to beat Immortals in a match, not many were predicting them as future champions. Strategically, they looked great, but playoffs is a higher pressure environment than regular league and no one knew how the rookies would perform. They ended up beating rivals TSM in the finals in a nail biting clownfiesta-y five game series, which granted them a ticket to MSI.

We all know how this event went down. By this time, I think that a combination of the lineup’s success, analysts that focus solely on stats and the fact that the only roaming midlaner being played was Leblanc (not precisely for those with anything less than superb mechanics), made it reasonable to think that the rookies had matured and that they could perform adequately in standard champions and lanes.

In this new situation Stixxay came out as proficient in lane bully ADC’s, having a stellar performance throughout the whole tournament. Huhi did not do as well; his Azir play left a lot to be desired. Even through this complication, they managed to take a game of of South Korea Telecom T1 and another one from Royal Never Give Up while also dropping one against the wildcard, Supermassive eSports. Again, another hint as to how this team has still a huge individual skill problem at this point, having the wildcard jungler run away with the game.

From here on out, the team’s hot streak banishes. They are still a decent team, but the macro improvements by TSM and Cloud9, thanks to new coach Bok “Reapered” Han-gyu contribute heavily to a closing of this gap. Both by the coaching performances and by how this improvement drops down to the whole region, CG lack of indiviual prowess is exposed. This led to them losing both series against TSM and Immortals. They also dropped both series to Apex, who finished seventh in the Summer Split.

Eventually, they qualify again for Worlds by circuit points. They lose both games to Albus Nox Luna, the wild card team. It is not fair to consider them the same kind of wildcard that they usually drop games to, as they sported good late game macro and took a game from both G2 Esports and ROX Tigers, Europe’s first seed and the tournament favorites respectively. Overall, the way in which CLG beat ROX Tigers was beautiful, but their results were not enough to qualify for playoffs. This time, strategy was not enough (we should be sincere and admit that ROX played and picked, at the very least, suboptimally).

What makes him the king?

Despite their shortcomings, CLG has the best macro in the West. CLG’s internal structure (single shotcaller from the support position), albeit already existing in the pre-Zikz era, has been nurtured to the point where he gives aphromoo champions that allow him to initiate and let his shotcalling better influence the game. This is the best structure you could hope for a team. A single leader has proven throughout history to be the most efficient way to organize people when decisions have to be taken fast, and support is they ideal role to take this mental burden. CLG is, without a doubt, the best western team at adapting the meta to their strengths and weaknesses when building a team composition.

This last point could actually very reasonably be argued about, since many think that Zikz does sometimes over-trusts his players and puts them in situations where their individual skill is often not enough to play the way they are desired. While this is reasonable to believe in some situations and no one is immune to errors in judgment, many additional considerations have to be taken.

The last, and most important point of all of them. Except for the bot lane, where they have the best support in the region and a good ADC, there is a more than reasonable case to be made that none of the other players are top three in their positions for the NA LCS. Yet, they have taken an LCS title. They have taken NA to their best international result since the KeSpa teams got involved and they have taken a game from the Korean favorites coming into the tournament. One trembles to imagine how far Zikz could take a talent stacked team that listens to their coach. That’s why he reigns supreme, and why any team in the world should be wary if CLG is at their gates.

Do you agree with this article? Who do you think is the best coach? Let us know at @GAMURScom.
Cabra maravilla is a freelance analyst that can be reached at @Cabramaravilla