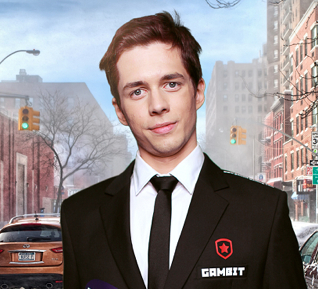 Evgeny “Darien” Mazaev had his first professional League of Legends stint back in 2011, when he befriended future teammates Alexey Ichetovkin and Evgeny Andryushin, who would be later known as Alex Ich and Genja. They formed a team known as “MTG”, which later became Team Empire after their roster was acquired by a new organization. The all-Russian team consisted of Darien, Genja, Alex, Irugat, and Zulin. After failing to make a splash in the early European LoL scene, Ichetovkin departed from Empire, before returning as the team’s Mid Laner within the same month. Rising Jungler Diamondprox joined the lineup shortly after, bringing along Support Player GoSu Pepper, who would soon be known as Edward. Team Empire finished 1st in the two tournaments that they played in during the year of 2011, notably defeating Team ALTERNATE in the Finals of the Go4LoL EU West Cup. A few months later, Empire’s roster was acquired by Moscow 5, where they would have extremely successful tournament results.

The year of 2012 practically belonged to M5, and they were widely considered the best team in the entire world at the time. Each member was firing on all cylinders, with Diamond’s Counter-Jungling method running rampage throughout Europe. The Russians destroyed at IEM Kiev, edging out North American fan-favorites Team Solo Mid 2-1 to win it all in Ukraine. They repeated their success in the IEM Season VI World Championship, making an absolute mockery of Team Dignitas to the sound of the applause of all their EU Fans. As the Season II World Championship drew closer, M5 were the heavy favorites to take the million dollars. Darien and crew only dropped a single game in the EU Regionals, losing once to Fnatic before sending the Season One Champions to the 3rd Place Match. SK Gaming fell easily to Moscow 5, a dominant 2-0 sweep ensuring that the Russians would take the 1st seed from Europe in the Season II World Championship. M5 would receive a BYE in the Tournament’s Group Stages, meaning that they would have to take on China’s famed Invictus Gaming in the Quarterfinals. Darien didn’t budge, taking on legendary veteran PDD in the Top Lane and emerging victorious with a comfortable 2-0 win. However, in the Semifinals, Moscow Five met their match. In an underdog story that’s worth posting an entire article about, the GPL’s Taipei Assassins bested the Russians, beating M5 by a single game to advance to the Grand Finals. There, TPA’s hard work would pay off, as they completed their Cinderella Story with a 3-1 triumph over Korea’s Azubu Frost. After watching the Assassins hoist the Summoner’s Cup proudly, Moscow Five was never quite the same team again. They briefly visited China for a few tournaments, winning most of them before returning to Europe for the start of Season Three. M5’s Organization fell apart due to some shady business deals, and their LoL Roster was picked up by Gambit Gaming in January of 2013.

Gambit showed up strong in the first few months of their existence, despite losing some steam from their incredible season the year before. Led by future legend Alex Ich, GMB went on to take 1st Place at IEM Katowice and ESL Winter before the first Split of the LCS. Proving themselves to be one of the undisputed best teams in Europe, Gambit held onto a solid 21-7 record in the 2013 Spring Split. In the Finals of the European Spring Playoffs, the Russians ended up settling for second place behind the rapidly rising Fnatic. Gambit continued their streak of success and consistency into the Summer Split, where they would finish with a 15-13 record. Prevailing in the first round of the European Regionals over NiP, GMB was swept by a red-hot Lemondogs squad, sending them to the 3rd Place match for the final European ticket to Worlds. In one of the most emotionally charged sets of League of Legends history, Gambit fought off the Evil Geniuses and claimed a 2-1 victory to play on the world stage. In the 2013 World Championship, the Russians were seeded into Group B along with Fnatic, Samsung Ozone, Vulcun, and Mineski. Solidifying their reputations as “The Korean Killers”, Gambit Gaming won their best of one against Samsung and became the second European team to advance from their group. GMB faltered in the Quarterfinals and were eliminated from the World Championship, despite taking a game off of Asian Powerhouse NaJin Black Sword. It was this series that sparked Darien’s cult following, after he humorously stumbled out onto the stage and raised a fist in the air during Gambit’s player introductions. In the offseason after Worlds, Gambit participated in the annual Battle of the Atlantic, sweeping an XDG Gaming that was struggling to find its identity.

Even though Gambit Gaming was doing well in tournaments, the roster was running on empty. Long-time Support Edward had returned from North America after a brief career with Curse, becoming the first European player to move over to the States. Darien and friends limped through the 2014 Spring Split, finishing 5th with a 14-14 record. Gambit was unable to keep up with the other teams in Europe, having to settle for mediocrity near the middle of the pack. The one member of Gambit that showed up the most during the Spring Split was Darien, who famously bought, an Ohmwrecker and a Morellonomicon on Renekton during a match against Millenium. His AP Warwick was also feared throughout Europe, and the Russian Top Laner was content when he forced a ban on his niche champion in Week 1. Darien’s eccentric personality and nonchalant play style made him a fan favorite, earning the admiration of thousands. In the 2014 Summer Split, Darien and Diamond were both benched by Gambit, much to the community’s disappointment. Though they brought back Diamond a few weeks later, Darien’s spot was filled by Kubon for the remainder of the Split. During the time he has been benched, the Swaglord has picked up the champion Gnar, playing him to perfection in Solo Queue and gaining even more respect. On Halloween of 2014, Gambit’s current Top Laner Jakub “Kubon” Turewicz announced that he would be departing from the organization itself. While former Mid Legend Alex Ich claimed that he would take the Top Lane spot if it was offered to him, it looks doubtful that Ichetovkin will receive a spot back onto the team. The more likely choice for the role is Darien, and fans are expecting him to return to form after a dismal Split. In the future, we may see Gambit become the powerhouse “Korean Killers” they once were, and we could possibly watch as the Almighty Swaglord raises the Summoner’s Cup by himself to the soundtrack of Dr. Dre’s “The Next Episode”.

“Hope you’re ready for The Next Episode, Hey-ay-ay-ay! Smoke weed every day.”