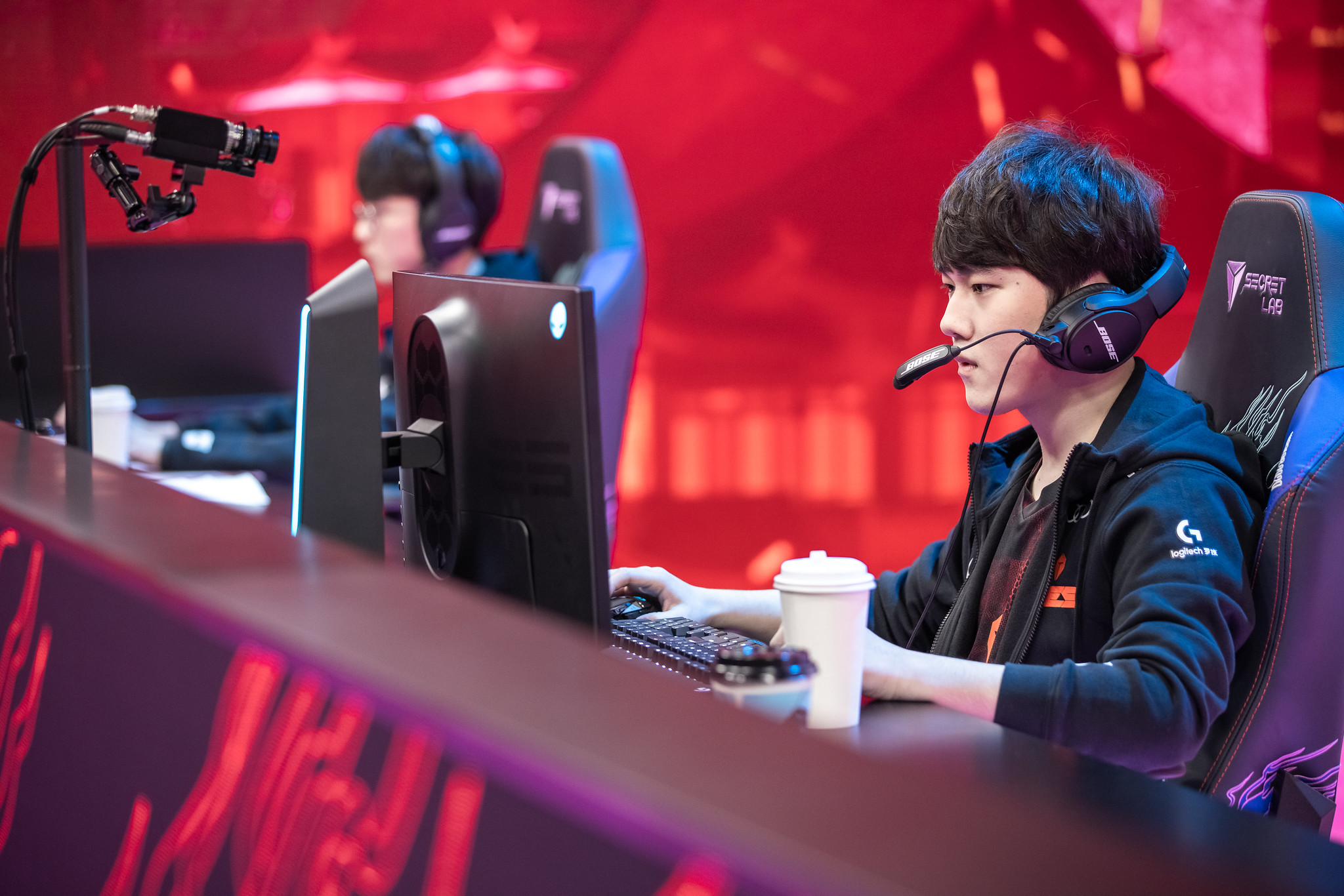 Top Esports beat FunPlus Phoenix in a three-game series today in week six of the 2022 LPL Spring Split and are now on a three-series win streak.

TES and FPX came into today’s match both at 4-4 at the midway point of the 2022 LPL Spring Split with different journeys to reach this point. FPX were the definition of consistency throughout the early part of the season while TES’ record is the result of newfound success in recent weeks.

Game one started out with TES top laner Wayward getting two solo kills on the Graves pick within the first six minutes of the game. The Graves quickly gained an item advantage to sustain any possible advantageous trades with FPX top laner Xiaolaohu. Wayward pressed his advantage on the top side of the map to help jungler Tian gain real estate in FPX’s red side jungle. Wayward held a 2,200 gold lead over Xiaolaohu at 10 minutes and was the majority of TES’ gold advantage at this point.

Though the top side was a disaster for FPX, the remainder of the map was also going in the favor of TES. Tian was able to apply his pressure in the bottom half of the map as well because of his top laner’s massive advantage.

At 23 minutes, TES had two dragons, a Baron, and 15 kills while FPX were unable to grab a single kill onto TES. Just two minutes later, TES were at the Nexus towers. FPX’s primary goal at that point was just to grab one kill before they lost. But in the end, TES closed out a dominant first game in which they left FPX stunned with zero kills.

In game two, TES misplayed on the top side after a failed tower dive attempt onto Xiaolaohu’s Gwen, which helped set him up for success. And this time, it was FPX who built an early 2,000 gold lead at 10 minutes, which was diluted across the different lanes. FPX AD carry Lwx grabbed solo first turret gold on Jinx.

TES traded objectives admirably when they were able to grab top priority and traded a tower for the initial take, but FPX still held a tempo advantage. They carried this tempo advantage into a 5,000 gold lead at the 25-minute mark. But TES were able to slowly chip away at this gold lead when they picked off Xiaolaohu in a fight near the Infernal Drake and grabbed their second dragon of the game.

But aside from this one fight, FPX did not allow any avenues for TES to come back into the game. They played a slow and controlled macro game to grab the Baron around the 30-minute mark. This helped FPX push their top and mid lane waves into TES’ base. Once they got the initial pick onto Wayward, TES were forced into a disadvantageous four-vs-five situation. This allowed the Baron-empowered waves to push deeper into TES’ base. FPX were able to let the minions destroy the towers and eventually the Nexus.

The final game of this series began as a battle for map control with both teams opting to go for towers and objectives over individual skirmishes and kills. Only four kills were seen in the first 20 minutes of the game.

FPX then killed three members of TES in the jungle, which allowed them to posture toward the Baron. But FPX made a crucial mistake when they attempted to dice roll the Baron and failed to ward the other side of the pit. FPX got the Baron down to 1,500 health, but Tian stole it from FPX.

This helped TES build a lead after an even battle between the two teams. They began to press their advantage in the form of turrets and objective control. FPX looked lost after the Baron steal from TES, who continued to push the tempo in the game. With multiple Ocean Drakes, TES were able to maintain a constant push because of their health regeneration.

The final teamfight of the game came when FPX pushed down the mid lane. TES flanked them and immediately killed Gori’s Azir. Jackeylove’s Jinx had fully scaled up to clean up the fight. TES aced FPX and got their fifth win of the season.

TES’ win against FPX bumps their regular-season record up to 5-4 and into seventh place with a three-game win streak after starting the year 2-4. Now, TES look like a contender for one of the LPL’s top six spots and are just one game behind Bilibili Gaming, who are in sixth at 5-3.

And TES’ next three series will be a good indicator to see if they can climb past seventh place. They take on EDward Gaming this week, followed by Bilibili Gaming and LNG Esports next week. If they can take two wins, and one against Bilibili Gaming, that would put TES in serious contention for a top-six spot and possibly a top-four placement in the 2022 LPL Spring Split.

For now, they’ll look to continue their three-series win streak against EDG, the No. 1 team in the LPL standings.

As for FPX, this loss puts them in troublesome territory with a 4-5 record and in tenth place. FPX continue to showcase that they can challenge the top half of the LPL table but struggle with the basics around objective control and the early game at times, as seen today.

FPX will have an opportunity to bounce back from their loss against TES when they take on both Rare Atom and ThunderTalk Gaming in week six. The sixth week of the 2022 LPL Spring Split will continue with Royal Never Give Up vs. Rare Atom on Feb. 22.