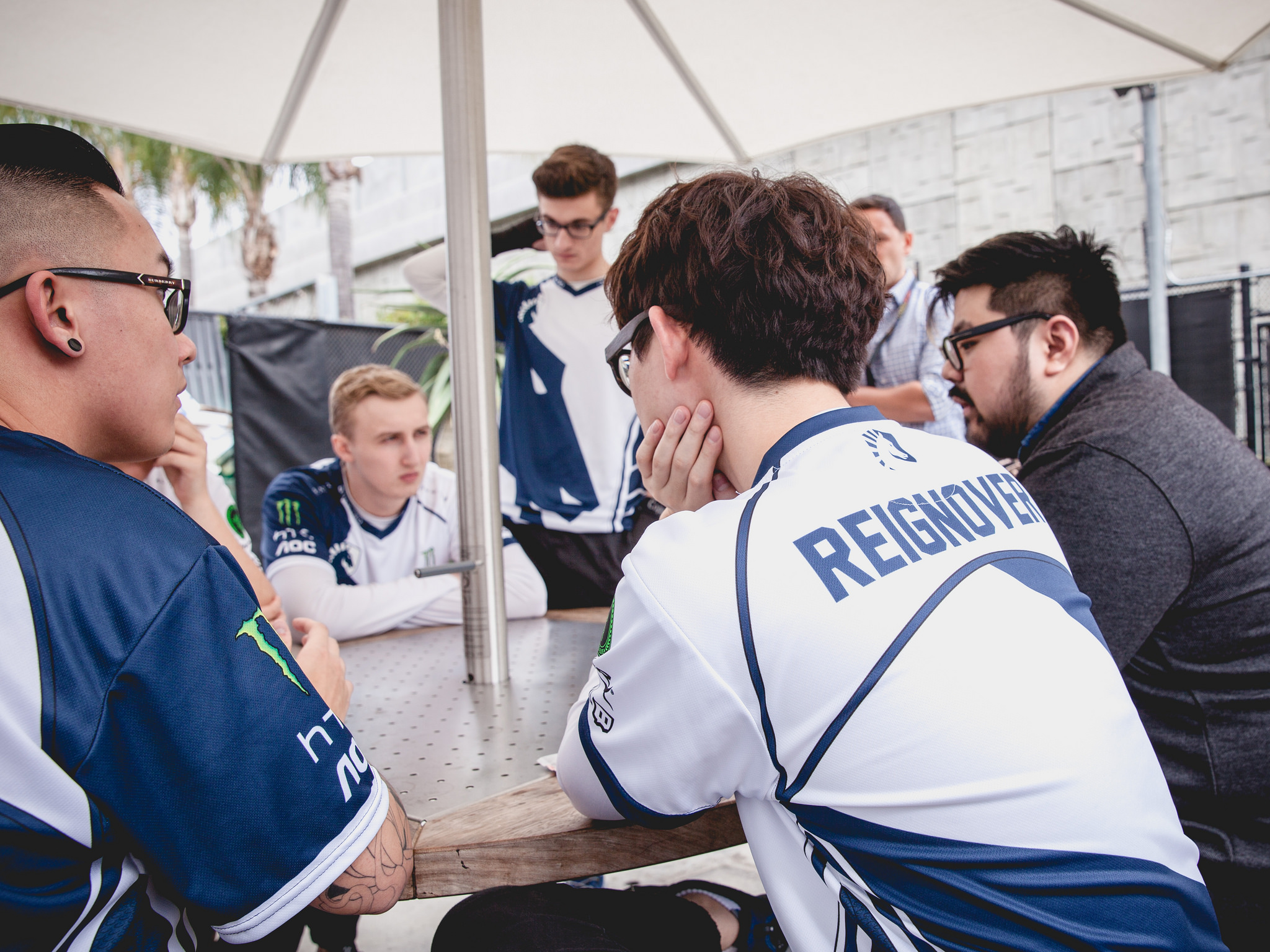 James “Dash” Patterson does not mince words getting at the truth.

And when Dash saw that Team Liquid was making a substitution at mid lane after just one series, he got right to it: It seemed like a total panic move.

Analyst Mark Zimmerman, who has worked with Liquid before, didn’t do much to defend them. Other than saying that we don’t know the whole story, he put the blame for the, to put it nicely, confusing situation squarely on management’s shoulders.

So what actually is going on?

The team isn’t telling us. Their Facebook page, Twitter, and website are completely silent on what their strategy is. We have no clue whether this was a one-time thing because of an issue Grayson “Goldenglue” Gillmer’s availability or if the idea all along was to play two mid laners, with Andrew “Slooshi” Pham as a regular sub.

This hearkens back to the dark days of last split, when Goldenglue was falling behind in lane and even worse in teamfights. That led to the team swapping ADC Chae “Piglet” Gwang-jin to the mid lane, with Goldenglue taking a long sabbatical to bootcamp in Korea, by himself.

Seeing that drive to improve and presumably after scouting his role with the team, they brought him back into the fold as the starter for the Summer Split. Then after an opening-series loss to an improved CLG team, it was over. Just like that, Goldenglue was out for Slooshi.

What did Goldenglue do in the match against CLG that was so egregious? Truthfully, it’s hard to tell.

A hard look at Goldenglue

In the first game, the team got out to an enormous lead by picking up First Blood for top laner Samson “Lourlo” Jackson’s Fiora, which could have won the game by itself. Then, to make things even better, Piglet’s Jhin—a strange pick in this meta—picked up three kills on a series of botched plays by CLG in the bot lane.

The set up could not have gone better. All Goldenglue needed to do on Orianna was keep lane pressure on Choi “Huhi” Jae-hyun’s Ahri, preventing his opponent from leaving and rotating. For the most part, he did that. He was even in CS, not great, but given a lack of jungle attention from both sides, excusable.

Failing to press their advantages

Meanwhile, the team lost its lead via an asinine series of rotations and macro plays. Instead of bullying lanes with vision and extending their advantages—Piglet’s first buy was a B.F. Sword to his opponent’s control ward—they rotated away from areas of strength and traded objectives, exactly the wrong thing to do from a position of strength.

All of that let CLG get back into the game bit-by-bit until the teamfighting began. In those fights, Goldenglue was not good. Multiple times, he failed to use flash and other skills to get out of CLG’s CC chains and died before doing any damage. He was a complete non-factor, something that should not happen on Orianna.

But was his performance really any worse than that of the other Liquid members? Was it worse than Lourlo overextending and failing to riposte the Elise E when the inevitable gank came? Was it worse than support Matt Elento setting up deep vision for areas of the map Liquid would never visit again, letting those wards expire harmlessly? Or Kim “Reignover” Yeu-jin constantly farming his jungle while objectives fell around the map? Or Piglet playing Jhin for some godawful reason? Jhin is off-meta and a champion Piglet has never shown affinity for on the professional stage.

Fans may blame Goldenglue more for the second game, when he fell far behind in lane to Huhi’s Syndra and never recovered. Those reading just the post-game CS numbers and KDA will kill Goldenglue. But the reason he fell behind was because Reignover and Lourlo got caught on a level one invade, Goldenglue tried to help, but was caught by a well-timed roam from CLG support Zaqueri “Aphromoo” Black’s Nami. Sure, he didn’t flash early enough and was forced to recall, giving up a whole wave of minions.

But he wasn’t the only one to fall behind. Lourlo was behind the whole game, neutering his split-push Renekton. Reignover was caught again and again, replicating his struggles from spring. Piglet was better on the more familiar Twitch, and his play alone pushed CLG off objective after objective. And even though Goldenglue was behind, he was there in key fights to try to help.

Team Liquid’s only chance was for Goldenglue to go ham despite his gold disadvantage, to try and assassinate a squishy. In key fights around Baron and Elder Dragon, that’s exactly what happened. He wasn’t timid, he was on-time, and he did his job. The disadvantage just became too large to overcome.

And it’s not like Slooshi was better on Sunday. He was totally undressed by Henrik “Froggen” Hansen, but so was the rest of the team.

Deep seated issues behind the team

There are reasons for Liquid’s failures across the roster and coaching staff. The one common theme? Management. The way this team was put together and attempts to play the game seem totally disjointed. What are they seeing in scrims that made them so confident in Goldenglue, and why did they pull the plug after just one series? What about Lourlo, who has displayed about a month of top-level play on Nautilus in spring of 2016, and hasn’t gotten back there since?

There are deep rooted issues surrounding this team, and replacing one or two players is not going to fix them. Not when the team had a whole month between splits to figure it out and seem like they’re back at square one. We do have to credit the team for trying, for reaching out to unconventional sources like Mobalytics for help. And previously they’ve been very transparent on their plans for the team.

But after several months of soul searching, Liquid seems no closer to finding an identity. There’s a lot of League left to play this summer, but unless things improve, that will only lead to more questions.