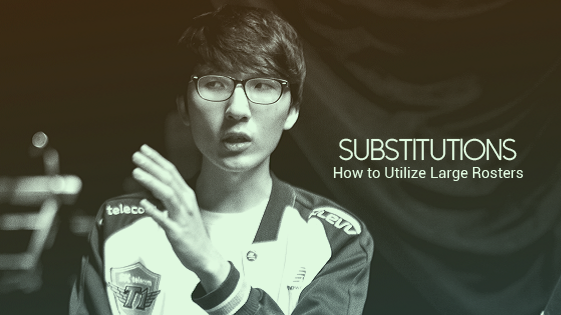 World Champion midlaner for SK Telecom T1, Lee “Faker” Sang-hyeok has been deemed the best League of Legends player in the world by many fans, journalists, and community members. American sports network ESPN would even refer to him as the “first true global star of gaming”. It is for this reason that the decision to use “back-up” midlaner Lee “Easyhoon” Ji-hoon by SKT’s coach would be questioned by League of Legends fans around the world. The 2015 OGN Spring finals would see Easyhoon play in all three games in an SKT victory, putting “the world’s best player” on the bench for the most important match in the entirety of the tournament. What was the reasoning behind starting SKT’s back-up?

Meet Kim “kkOma” Jung-gyun, head coach of SK Telecom and mastermind behind the questionable starting roster decision. The decision to use a second midlaner would be a part of a massive roster shakeup at the beginning of 2015. The Korea e-Sports Association’s decision to allow only one team per organization would prompt the merging of sister teams and the dispersion of Korean players to other regions. For SK Telecom, it would create a roster with multiple talented players at each role. Although the team would lose many members of it’s Season 3 World Championship roster in the offseason, SKT would have two players in all roles except for the toplane.

SKT wouldn’t be the only team choosing to use a large roster going into the 2015 Season. In fact, nearly all teams in the LCK would use a roster with more than five players going into the new year. The change would create roster depth, internal competition, and roster utility for Korean teams. However the potential strategical choices and options when using substitutes would become a hot topic. How should organizations use their extended rosters?

The substitute has been a crucial part of western sports play. In sports such as basketball, the “6th man” is a term that describes a substitute that will still maintain significant playtime despite not being a part of the starting roster. In baseball or American football, substitutes are frequently used to give members of the starting roster days off or to simply create opportunities for underused players to prove their worth.

Not only are subs used to rest starters, but the substitution role is also used for strategical gain. Let’s take a look at the “bullpen” in baseball. In baseball, a team usually has a pitching staff of 11 – 14 pitchers. While some of these are starting pitchers (will start the game and usually pitch for a majority of the game), a team will usually have more relievers than starters. Relievers will come into the ball game later into the game and usually swap back out after pitching an inning or two. However, baseball managers will often use these relievers simply to win statistical match-ups. Does the enemy hitter struggle vs a specific type of pitch? Does the enemy batter have a rough time dealing with left handed pitchers versus right handed? Clubs will use this knowledge to strategically use players that can reliably win match-ups vs hitters in tough situations.

Substitutes are also often used to help rebuild starting players who might be on a slump. If a starter is struggling to hit the baseball consistently, a manager might take out the player to create time for the player to focus on rebuilding their skill before either returning him to the main roster or cutting him from the team.

In traditional sports, talent with potential isn’t rushed to the top stage, but instead is carefully seasoned over time in smaller leagues. This of course is an advantage seen in traditional sports that is far from becoming a reality in eSports. While League of Legends might have systems such as the Challenger League to create opportunities for young talent, the coaching staff and management of traditional sports organizations allow for talent to be developed reliably and slowly.

For League of Legends, passionate players will often climb SoloQ before joining small challenger teams with at most a minimal coaching staff. This makes it hard for players to truly develop into a top player unless they are directly picked up by a top-tier team. In League of Legends, the in-house atmosphere and opportunity to scrim with professional players creates an incredible opportunity for talent with potential to grow.

Although it has been common in Eastern regions, the Western League of Legends scene has only recently begun to hire large coaching staffs. Top teams such as Team SoloMid, Origen, and Team Liquid have hired multiple analysts to assist with the strategical preparation for high level games. This development will allow for more statistical analysis. Does the enemy midlaner struggle vs a certain champion? Does a certain team composition counter the enemy team’s play style? These situations can create opportunities for substitutes to be used for strategical benefit.

SK Telecom is a great example of a team who has already recognized these opportunities to use substitutes for strategical gain. When champions such as Azir, Cassiopeia, and Xerath were strong, coach kkOma would frequently use Easyhoon and his ideal champion pool to generate large advantages and team fight victories as the later parts of the game would roll around. Although many would still argue that Faker was superior with the same champions, Easyhoon’s specific play style in the midlane would allow the team to play in a different way from when they might play with Faker’s always-aggressive playmaking style.

SKT would also use substitute jungler Im “T0M” Jae-hyeon frequently throughout the later parts of the OGN Spring season due to his champion pool (favoring tanks such as Sejuani, Gragas, and Nunu) in the Cinderhulk meta. Again, although many would argue that bengi was a better jungler overall, SK Telecom was given the opportunity to both create an opportunity for T0M to prove his worth while also taking on a new playstyle with the swap.

CLG would impress many by announcing that they would, like SKT, use two midlaners for the 2015 NA LCS Summer Split. The duo of Eugene “Pobelter” Park and Choi “HuHi” Jae-hyun would share the midlane duty for the second half of 2015.

“The decision to add two mid laners was made in order to emulate a larger roster format that is prevalent in the LCK and LPL, as well as to add additional strategic diversity, a better team structure, and more options to use in competitive play.”

Clearly, Counter Logic Gaming had the right idea to attempt to use two midlaners. Although HuHi would be unable to play due to Visa issues for the first few weeks of the split, he would return to begin sharing the duty before Week 4 of the LCS. Theoretically this change could give the team a leg up on the competition in regards to strategical usage of the midlane pair in BO5 situations or specific matchups during the season.

In a vlog for CLG, head coach Chris “BlurredLimes” Ehrenreich would say he didn’t just want two players for midlane, but multiple players for every role on the team. Having a roster of ten, in theory, would heavily benefit a team in the long term. The ability to scrim within the team and create internal competition could create at atmosphere similar to an organization with sister teams: think Samsung, KT, SKT, Jin Air, NaJin, or CJ. Samsung’s World Championship run in 2014 could even be attributed to the team’s ability to collaborate with each other in order to discover new strategies or play-styles.

While an organization like CLG couldn’t actually have multiple teams in the LCS, the theory of having 10 high level in-house players to push the team further is interesting.

At the idea’s core, the introduction of large rosters into competitive League of Legends is to improve roster depth. Teams with multiple options at each role have opportunities to practice and change aspects of the team at will. The retirement of players, or the development of young talent could allow teams around the world to stay flexible when changing members of their roster.

Although there is currently a limit on the amount of substitutes a western team can field, the possibility for expanded rosters and organizations create opportunities for teams to push the boundaries of what can be accomplished in competitive play. There is clearly an opportunity for strategic counter-play and internal growth that comes alongside larger teams. How or when will more western teams begin to jump on the substitutions bandwagon?