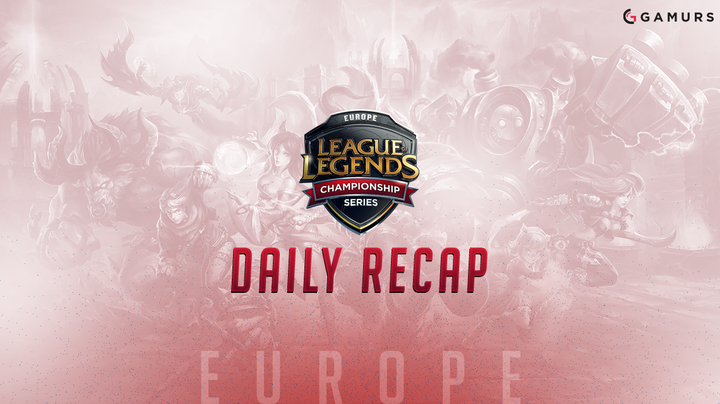 From Splyce overtaking Fnatic in the standings, to G2 Esports dominating Unicorns of Love, here’s how Day 1, Week 8 went down:

Game 1: The first match was all FNC, until around 25 minutes when SPY won a teamfight mostly led by top laner Martin “Wunder” Hansen (6/2/4 as Fiora) and mid laner Chres “Sencux” Laursen (8/2/6 as Kassadin). After that teamfight, SPY snowballed into the lead, grabbing a Baron, a Dragon and then FNC’s nexus.

Game 2: The second game was a standard win for SPY. FNC was only able to take two towers and a kill, whereas SPY got 11 towers and seven kills. Whether FNC is tilting or SPY is on a roll (or a combination of both), the EU LCS is now being shaken up. The best performance of the match came from Sencux, who went 4/0/2 as Malzahar.

Game 1: After looking a little shaky for the past few weeks, H2K came out looking strong against VIT. The first match started off slow, with first blood not coming until 18 minutes in, but after that, H2K started forcing many teamfights and claiming multiple objectives. The best performance of the match came from H2K support Oskar “VandeR” Bogdan, who went 0/0/13 as Karma.

Game 2: The second match pretty much followed the same pattern as the first. H2K won again after forcing a few more teamfights. The best performance of the match came from H2K mid laner Yoo “Ryu” Sang-ook, who went 8/3/4 as Cassiopeia.

Game 1: The first match was all GIA. OG was lane-swapping and rotating well early on, but then GIA took first blood and then picking off OG members and feeding GIA top laner Lennart “Smittyj” Warkus (7/0/5 as Fiora). The game was a sure loss for OG after Smittyj won a 1v3 situation and barely took any damage.

Game 2: The second game was about the same as the first. OG made the mistake of feeding Smittyj (7/1/6 as Fiora), who punished OG once again after he was taken down for first blood. GIA found themselves take a solid lead around 28 minutes and never looked back.

Game 2: The second game was about the same. G2 absolutely dominated UOL, who only got 7 kills to G2’s 20. The best performance of the match came from G2 mid laner Luka “Perkz” Perković, who went 10/2/7 as Kassadin.

Game 1: The first game was 40 minutes long, but ROC never lost the lead after 10 minutes. Two of the lowest teams in the standings saw two different problems. ROCCAT was unable to finish the game, whereas S04 simply looked distraught as a team. Despite having a 12 kill lead, three Dragons and a Baron over S04, ROC still needed 40 minutes to end the game. The best performance of the match came from ROC ADC Pierre “Steelback” Medjaldi, who went 7/0/6 as Jhin.

Game 2: The second game, again, was about the same. ROC consistently outplayed S04, but still needed 35 minutes to win. The best performance of the match came from ROC jungler Jonas “Memento” Elmarghichi, who went 6/1/10 as Rek’Sai.

What are your thoughts on Day 1, Week 8 of the NA LCS 2016 Summer Split? Who do you think will take the respective crowns? Let us know in the comments below or on our Twitter – @GAMURScom