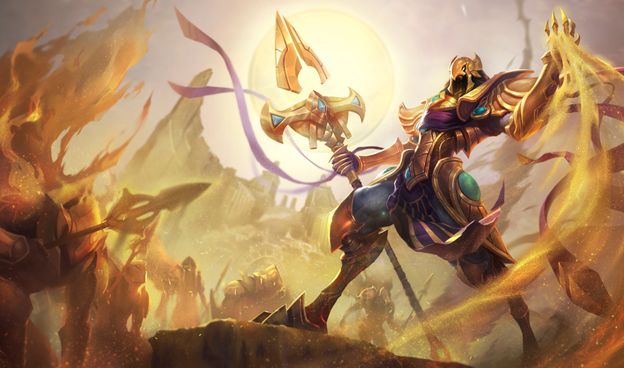 As of patch 5.3, two of the most banned champions on Summoner’s Rift are Azir and Rek’sai respectively. Yet, Solo Q ban rates don’t necessarily translate to competitive prowess, with Akali being a prime example of a competitive flop. I believe that Azir’s popularity in solo q does translate into competitive, with his strengths being magnified, while Rek’sai’s no longer does after patch 5.2.

Azir: Emperor of the Rift

Quite simply, Azir has one of the best lane phases out there, especially when he gets a few levels. His soldiers provide him with a safe way to farm from a distance, and proper control of them provides him with the ability to make zones where an enemy champion is forced to take sizable harass if he walks into them. He is also incredibly safe from ganks because of the already noted long range, and because of the innate escape from his shifting sands, an ability which also happens to double as a form of innate utility. This leads to the primary reason Azir transitions well into competitive from solo q: utility with high damage and scaling.

Azir is the master of high damage, utility mages. Every skill he has gives him some form of utility based around the sand soldiers at the core of his kit. The most obvious utility comes from his shifting sands and emperor’s divide (his dash and wall respectively), yet these two abilities are not where the majority of his strength actually comes from. While his ultimate is incredibly useful because it forces enemies to reposition around a newly erected wall, and does solid damage, the soldiers themselves in combination with his conquering sands is truly what makes Azir shine. His soldiers provide zones of control, where the enemy is forced to either take massive damage by positioning there, or go all the way around the soldier’s auto attack range. In addition, his conquering sands allows him to quickly reposition these zones, or deal even more damage to enemies walking through them. Not only that, but conquering sands can be used in conjunction with shifting sands to generate a gigantic amount of distance for himself, whether he wants to use it offensively or defensively.  He has the potential for all of this, while having solid scalings on his abilities late game, yet I still have not touched on the most underrated and probably single most important utility that his soldiers give him. Azir never has to facecheck a bush because of his arise!, and he can use the generated soldiers to clear wards. This aspect is so significant to teams because it means they can clear pink wards and regular wards they swept from a distance, where before they would have to either ignore them and grant the enemy vision, or become caught out while clearing them.

Azir transitions extremely well from Solo Q to competitive because of his dominant lane phase and utility. He is most teams’ desire for a mid champion, providing solid power (damage) throughout the game and insane amount of peel and zone control for his team, two of the most important things in setting up objectives and favorable teamfights. And as a bonus, his passive grants him the ability to defend a lane from a distance, at the very least stalling the enemy team’s siege.

Rek’sai’s utility cannot be ignored, with burrow and tunnel providing her with some of the highest mobility out of any champion’s kit out there. Her ultimate also gives her the ability to teleport (and therefore countergank) to any tunnel she has down globally, making her map pressure extremely high, as she can go from one fight to another extremely quickly. This can also be used by a smart Rek’sai as a way to come back into fights after going extremely low; this tactic has already secured a team a dragon in NA LCS. As a bonus to all this, her passive while burrowed allows her to see movement from a sizable distance without having ward coverage, a valuable tool for spotting potential flanks and counterganks.

The reason that Rek’Sai is considered (and pre 5.2 was) such a broken solo Q champion is because of the considerable damage done through a specific build path. This build path is one popularized by Nightblue3, and it consists of Stalkers with a warrior enchantment into Triforce into tank items. The reason this build is so strong and used to be even stronger is because of the raw amount of damage it gives while making her extremely difficult to kill. The damage spike from acquiring Triforce continues throughout the game, even scaling into the late game, which makes her a threat that the enemy team is forced to deal with.

Now, if you put Rek’sai’s utility and damage together, you understand why she is such a good solo q champion. Most teams do not punish her early for the significant cost of her primary damage item (Triforce), and the underwhelming damage she has until she completes it. However, it is easier for her to get more ganks in while also efficiently farming her jungle because of her utility from her tunnels, and because of the health regeneration on her passive. She just moves around the map faster and is consistently at a higher health than most other junglers. In Solo Q, this translates to more ganks, and should translate to more successful ganks, putting her team ahead and snowballing her gold so that Rek’sai can quickly reach her optimal power spike with Triforce. However, this does not necessarily translate to the competitive scene. Coordinated teams punish Rek’sai’s who build Triforce and the delayed tankiness of the build path, so Rek’sai does not build Triforce in competitive games. This makes her damage significantly lower, which makes her less of a threat than a champion with more built in damage, such as Lee Sin or Jarvan IV. Also, Solo Q games just tend to be messier than competitive games. This means more kills and more extreme gold leads, with successful Rek’sais achieving their item thresholds faster than they would in a competitive game.

While Rek’sai may be a strong Solo Q pick, she is, quite simply, just not as good in competitive play. Her damage mostly comes from a specific build that players in competitive matches just cannot afford, and her base damages were gutted so hard in the 5.2 patch changes that other junglers just do more than her innately. Not only that, but the main reason Rek’sai excels in Solo Q is because of how easy it is for her to snowball (and get her necessary items to be a high damage and tanky threat), as she is almost constantly in position to gank because of her passive health regeneration. However, this does not mean that Rek’sai will never be seen in competitive. She still has high global pressure because of her ultimate, high mobility because of her tunnels, and an almost guaranteed knockup with a flash unburrow. She also does extremely well versus champions with stealth, as she can see their footsteps even while they are invisible. Unlike Azir, whose Solo Q strengths are magnified in the competitive scene, she will likely only be seen as a niche pick to counter invisible champions, such as Twitch, or as a solid pick whenever the more potent junglers such as J4, Vi, and Lee Sin are picked out or banned out.

Thank you for your time reading this article.