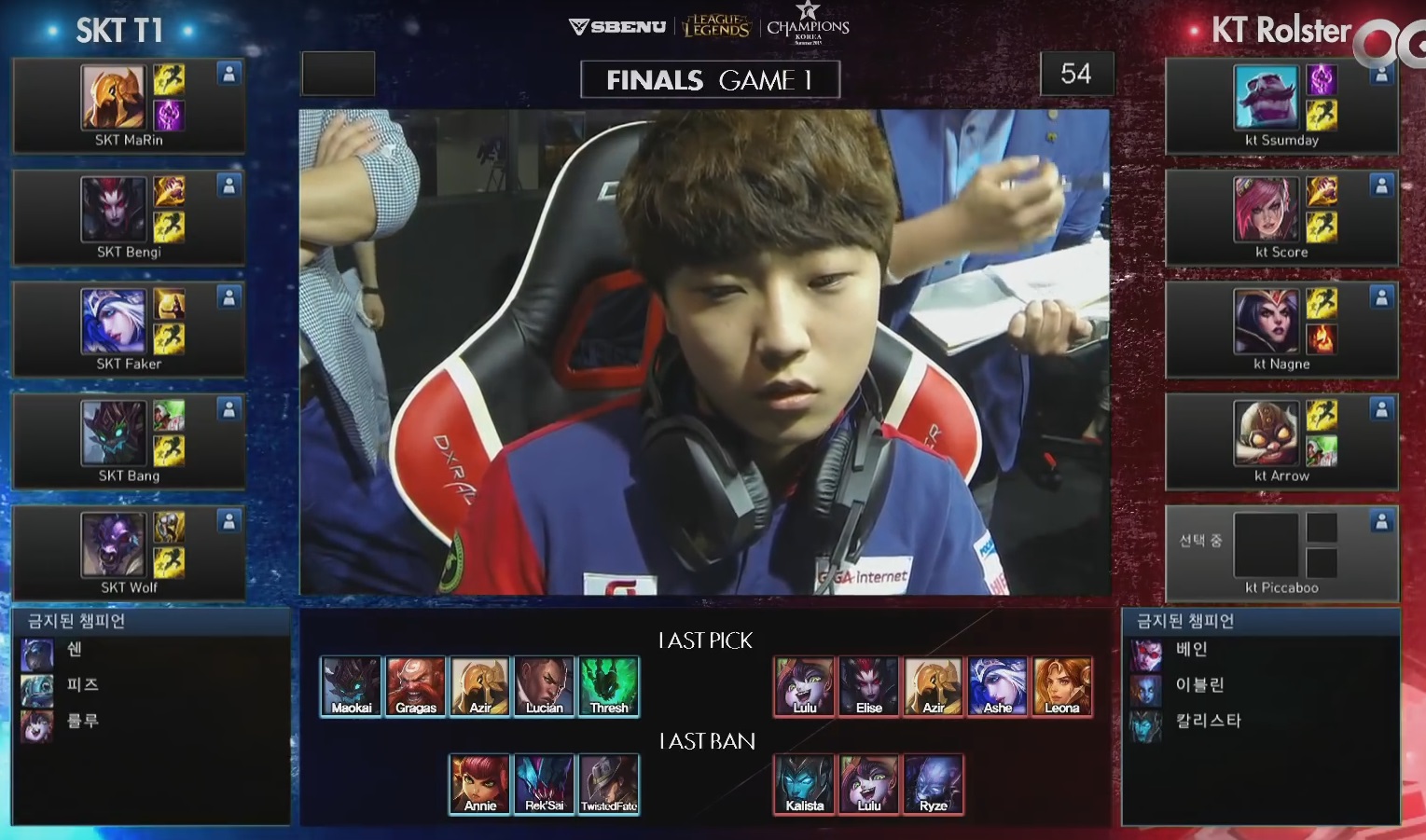 In the lead up to the World Championships, League of Legends has progressed towards the top lane becoming one of the most important lanes. As the importance neutral objectives such as, dragons have become more important in competitive play, it has become almost mandatory to have a top laner that is able to impact the map globally through teleport usage and split push pressure. If MSI showed us anything is that a world class top laner is going to be required to compete internationally.

Smeb and Ssumday have been two big top lane talents that both gained critical praise during Season 5 in LCK. Smeb looked upon as a bottom tier top laner with Incredible Miricale during Season 4, remerged with KOO Tigers as a carry top laner during the LCK Spring Season Qualifiers. After the departure of Kakao and Rookie to Invictus Gaming, Ssumday progressively found his footing as the star player for his team when KT desperately needed one. By comparing these two players, we can also show what qualities top laners need to compete internationally.

Let’s briefly look at statistics for both laners,

By comparing the statistics, Smeb is undoubtedly the better top laner. He receives less gold share, however still provides more damage and participates in more kills than Ssumday. But this discrepancy can be explained by the champion picks themselves. Smeb during the entire summer season has played 14 games of Rumble, which may have increased his damage share and reduced his gold as Rumble requires less farm than most top lane champions. Ssumday on the other hand, throughout the summer season has played Moakai and Shen the most, two low damage champions. KT Rolster’s tactics revolve around Ssumday getting ahead and using him as tool to pressure the map through split pushing which explains the high gold percentage. It should be noted that both players have relatively high gold percentage in comparison to the world average.

Both top laners surprisingly expressed similar champion pools in the post season as Malphite, Lulu, Gnar, Fizz, Shen and Riven being among their shared picks. The difference between the top players is Smeb’s emphasis on Rumble while Ssumday has shown Fiora, Gangplank, Yasuo. Smeb’s champion pool during the regular season has been known to be fairly narrow with Moakai and Rumble played in 50% of the regular season games but has since then expanded towards the end of the season. We have yet to see too many games of Smeb with the Juggernaut patch so there are quite a bit of unknowns going into the World Championship.

Ssumday has similarly played Moakai and Shen for 21 out of 44 matches played in the regular season but has shown more impressive performances on a wider range of champions than Smeb – something that isn’t probably reflected through statistics. As a result, Ssumday drew 8/9 bans from SKT and 10/12 bans for Jin Air while still being able to find champions to carry the team with.

Despite ranking 2nd in cs and gold differential during the regular season, Smeb regularly fell behind in the laning phase in the playoffs (with his cs deficit being only higher than Ssumday in the playoffs). This is partly due to the way Hojin plays the early game. The goal for the KOO Tigers is not to win the early game, but to survive and win through superior co-ordination in the midgame. Hojin therefore rarely aims to get Smeb ahead of his opponent and tries to babysit the rest of the map. The team is also willing to sacrifice winning matchups for better compositions as all three lanes are quite defensive. The one time they tried to prioritize Smeb, they were outclassed by SKT in the Spring Finals.

Ssumday surprisingly has not been very lane dominant (at least for the first 10 minutes) during the post season despite KT’s reputation for being reliant on their early game. The issue for KT’s opponents is when Ssumday does get a lead past 10 minutes as he is one of the best at snowballing advantages over his opponent. Ssumday and KT typically gets early leads when they are able to lane swap so that Score and Piccaboo can roam. KT are also very reliant on getting first blood and prefer to win by skirmishing with more players.

The majority of the plays made by Smeb are made with the team. Any teleport play is always backed up by several members of the team. Against Duke in the playoffs, Smeb was unable to control his opponent and was reactive in the split push however, he remained relevant throughout the games. KOO tigers rather have Smeb be a teamfight threat rather than in a split push role. As a result the team coordinates with him well in teleport plays ensuring that he is in the fight rather than flanking with his teleport. According to data collected by Brendan Schilling, Ssumday comparatively uses his teleport for farm more than other top laners such as Acorn. This is usually done as a first teleport after double jungling. KT are also much less co-ordinated than KOO Tigers when using Ssumday’s teleport and rather use it as a response to the opposing top laner’s teleport in teamfights. If they do try to make a play with teleport it is usually a flank teleport.

In conclusion, teleports shouldn’t be a major factor when comparing the individual skill of both Smeb and Ssumday as the main difference in their teleport play is how the team plays around both top laners as they both react accordingly to skirmishes that occur around the map.

Smeb is always a contstant threat to the enemy backline during teamfights and rarely peels for Pray and Kuro unless when on Lulu. Instead together with Hojin and Gorilla, they provide enough of a front line so that Kuro and Pray can position themselves in teamfights unless Gorilla is playing Janna. In that case, they switch Smeb to more of tanky role to soak up damage and cooldowns. KT on the most part are the same, but are more willing to use Ssumday on champions that require leads to have an impact on the teamfights. I would say that Ssumday is the better tank player since he has good win rates on Maokai and Shen and has more experience playing tanks than Smeb.

So who is better? Depends on what you need. If I were to make a team from scratch with a star top laner in mind I would pick Ssumday. He has the better carry potential that can win a team games through individual performances, something that isn’t necessarily reflected in his statistics alone. KT’s play style is more successful than KOO’s when playing against teams that are weaker than them, however when faced with a top laner which can handle Ssumday, KT struggle.

But if I needed a quick replacement for a top laner, Smeb would be better answer. His statistics don’t lie and his playstyle is a lot more plug-and-play than Ssumday’s since he is a defensive laner and also the more efficient player. I could see Ssumday being able to play a safe low econ role in a team but as they are now, Smeb allows his team have more diverse strategies and different ways to win than just splitpushing and is subsequently the better top laner.

Thanks to Tim Svenhuyen for player statistics and First Blood statistics, Brendan Schilling for Ssumday teleport statistics and Naser Al-Naqi for the idea for this piece.