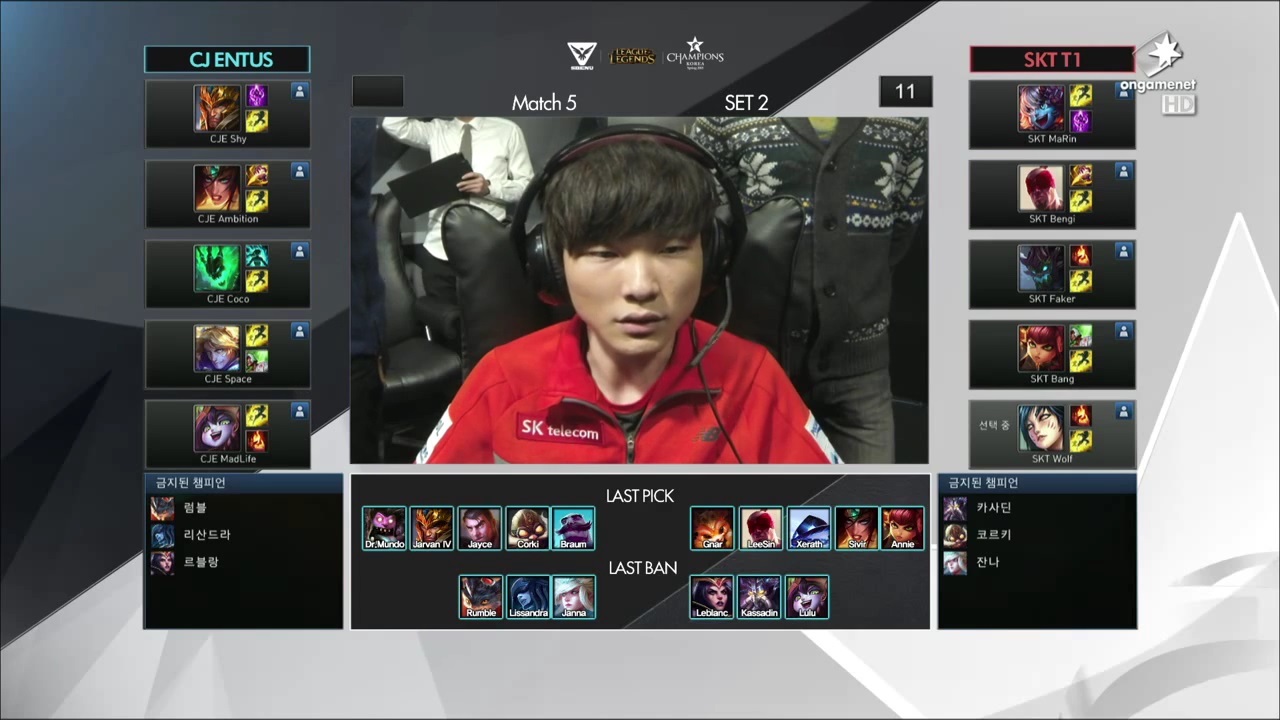 Slaying Goliath: How to neutralize Faker

The question of how to deal with the best player in the world is a conundrum that every team in Korea has to face throughout the regular season. Faker is quite likely the best player to have ever played League of Legends, his impact throughout the game rivalled only by a few in the scene right now. CJ however seemed to have found a way to deal with him in the second game of their impressive sweep of SKT on Saturday, and they did it in a multitude of ways.

The process of keeping Faker down began in picks and bans for CJ. With Fakers incredibly large champion pool it takes a number of bans and picks to limit him, but that’s exactly what CJ were willing to do. Taking away two meta power picks, Leblanc and Lissandra, were no brainers for CJ; Faker has shown an incredible proficiency on those two champions, picking up a penta in his last game on Leblanc, and it is well worth 2 bans to keep him away from them. With SKT having been burned a few times recently going for risky blind pick mids, it was a safe assumption to assume they would save Faker’s pick for last. As such CJ were able to take away the Lulu and the Ezreal, two picks again that Faker has shown a great ability to play in the preseason, CJ pushing him even further down his champion pool. Once the picks had played out down to Faker, he realistically had 3 options: Zed, Orianna and his eventual pick, Ahri. Zed was a poor choice in this scenario versus a composition that included a lot of CC, mobility and a Lulu, and so Orianna and Ahri were the better options. Surprisingly Faker opted against Orianna, his most played and most successful champion in professional play, to pick up Ahri. It is quite possible the pick was chosen for its hyper mobility to escape Jarvan cataclysm and get on top of the immobile Sivir pick, but with Ezreal arcane shift, Lulu wild growth and Sivir spellshield it was going to be particularly difficult to assassinate a target. A combination of limiting Faker’s options combined with a smart composition, CJ were able to push Faker onto a pick that was already diminished in effectiveness, before they had even stepped onto the rift.

Faker made what could be considered a poor decision during the level one, opting to skill charm in an attempt to catch Coco on the invade. In doing so he succeeded in blowing Coco’s flash, but between Arcane Shift and cleanse it was unlikely that Faker was going to be able to take advantage of this cooldown, and it severely hindered his level 1 in lane. Unable to push or trade effectively with Coco, he gave up a slight advantage in CS and hp before level 2, allowing Coco to stay safe and await ganks.

Madlife and Ambition played a huge part in keeping Faker down, starting from the 3 minute mark. At level 2 Madlife roamed mid, pressuring Faker and forcing him to play passive, further keeping the relatively weak early game champion Ezreal secure. Ambition then ganks twice in the space of 30 seconds blowing Fakers flash and then repeating, ensuring the kill with a flash of his own. CJ then 3 man Faker at the 6 minute mark, leaving him 20 CS down and 0-2-0, so far behind that he has been rendered irrelevant for the rest of the early game. Even when Coco himself is 3 manned, his flash, Arcane Shift and Cleanse all being available ensuring no death, and even then Madlife had roamed to assist him. By the 7 minute mark, Faker has had people gank or roam to his lane 5 times; the lane is no longer a 1v1 or a 2v1 but a 3v1, with the amount of assistance Coco has received.

A particularly important factor in keeping Faker on a leash was the immense vision control CJ kept around mid. After dying to the Ambition gank, Faker has no wards around mid, whilst CJ have both top and bot side warded; at this point, Faker has to play extremely passively, with no vision and the threat of further ganks and roams. SKT have poor vision around mid until the 8 minute mark, at which point the only wards they have are a pink in river and Bengi’s trinket top side. CJ had good coverage, particularly of the bottom side of the map, all early game, allowing for effective roaming and ganking from Madlife and Ambition without fear of running into Bengi or Wolf. This also allowed CJ to maintain pressure on both the middle and bottom towers by pushing the waves, epitomised at 9:20 when SKT attempt to take dragon. Not only are they unable to do so because they are stood on a ward (an example of their own poor vision control), but both mid and bot are pressured with waves into tower. Faker is unable to make plays against his own laner or roam effectively in this situation, whether to gank bot or take dragon as in this case. At 10 minutes, another example of poor vision being punished occurs. Wolf is caught backing on a ward and taken down, allowing CJ to 5 man mid and blow Faker’s flash and ult due to a complete lack of vision. Repeatedly CJ were able to take advantage of their own good vision and SKT’s poor vision in order to pressure Faker, preventing him from being the playmaking force that he usually is.

CJ also heavily prioritized Faker in the teamfights and skirmishes, most prominently at the 23 minute mark. Madlife flashes in order to hook and exhaust Faker, whilst Ambition ults for him, CCing and damaging Faker so much that he is entirely irrelevant in the fight. Shy being on Lulu allowed him to act as the peel for Space (a relatively safe adc anyway) and Coco needed none as Ezreal, allowing Madlife and Ambition to focus their attention on Faker, ensuring he was a non-factor in the teamfight.

Arguably, Faker made a mistake in his build path. Instead of opting for a Zhonyas Hourglass second, in order to nullify some of the threat of Madlife and Ambition diving him, he went for a Deathcap. With DFG, he had all the damage he needed to blow up a single target, and without a mana item he was never going to be able to cast the multiple rotations needed to benefit from the extra AP a Deathcap provides. A survivability item would have arguably been a much better choice in this particular game, especially with him being slightly behind. It is worth noting that Faker could have been building this item in an attempt to bring the game back; hoping that with the extra damage a Deathcap provides, he might have been able to make play to bring SKT back into the game.

Much of Faker’s troubles could be traced back to the ineffectual play of Bengi. Despite being on an early game centric aggressive jungler, Bengi made no impact around the mid lane, never being in the right place to counter gank or even attempting a gank of his own. Coco was allowed to farm freely with no pressure from the jungle, and picked up a particularly early Murumana Triforce combo as a result. The poor vision control mid also could be traced back to Bengi; by 8 minutes the only ward around mid that Bengi had contributed was a green in top side river, which is not where the pressure on Faker was coming from. Not only did he not buy any wards, he did not pick up an early sweeper to help destroy wards, resulting in a complete lack of control of the mid lane vision. This awful participation in the vision game was epitomised at the 22 minute mark, at which point SKT lose three pinks around dragon and the dragon itself due to a poorly timed recall from Bengi. At all points of the game Bengi’s game impact was almost zero, his only play being an early gank in the top lane. When your jungle is playing as poorly as Bengi did, the mid lane essentially becomes a 2v1, something that even Faker will struggle to cope with. Wolf attempted at many points to roam for vision and to support Faker, but without Bengi to support him his efforts were in vain.