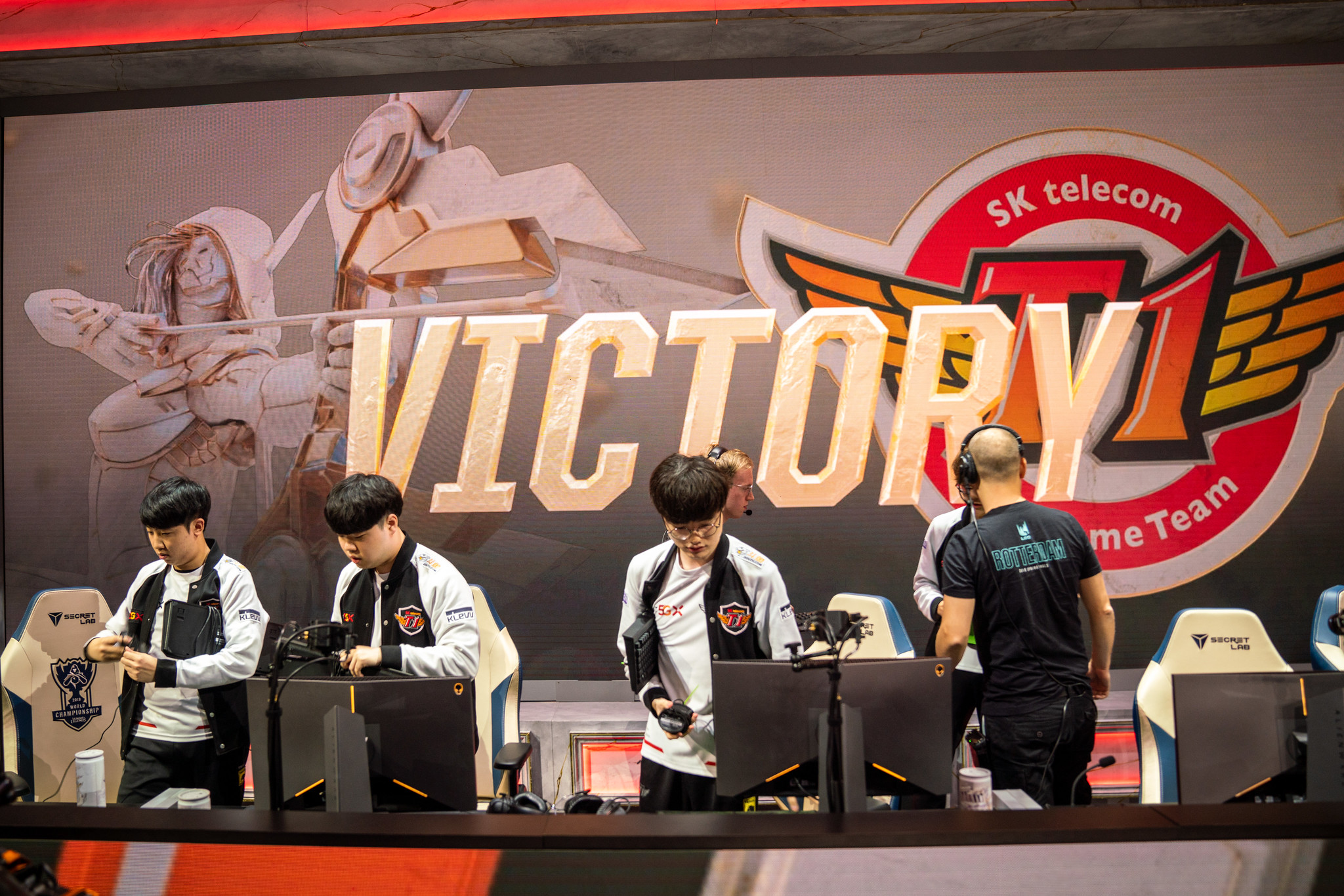 The League of Legends World Championships group stage continued today with SK Telecom T1 locking down their second win of the tournament with a backdoor play against Royal Never Give Up.

This Worlds we’ve seen an increasingly more aggressive SKT. Rather than playing a standard, controlled game, SKT have been the ones forcing aggressive fights and plays. Yesterday against Fnatic, SKT secured the win by taking fight after fight and forcing Fnatic to respond. Today’s game against RNG was closer, but SKT kept up the pressure through combative plays and remaining one step ahead of RNG.

As soon as Lee “Faker” Sang-hyeok hit level six on Twisted Fate, SKT roamed bottom to force a fight against RNG’s Jian “Uzi” Zi-Hao and Shi “Ming” Sen-Ming. A few minutes later, Faker baited out RNG mid laner Li “Xiaohu” Yuan-Hao’s teleport and was able to force bottom once again with his ultimate. At almost every turn, it was SKT engaging onto RNG. But RNG remained resilient by turning SKT’s aggression into favorable trades.

Uzi on Xayah was constantly able to turn fights for RNG through safe positioning. And Ming on Blitzcrank found several picks onto SKT’s players. The game remained on a knife’s edge throughout, but what RNG couldn’t account for was SKT’s ability to split push.

Kim “Khan” Dong-ha on Renekton forced RNG to move bot lane by split pushing which led to SKT taking Baron uncontested. RNG persisted with teamfights and a Baron take of their own but it wasn’t enough to prevent SKT from splitting.

To end the game Faker split top. As soon as he reached RNG’s inhibitor he was joined by teleports from Park “Teddy” Jin-seong and Khan. At this point, RNG were focused on claiming more of SKT’s base and could not back in time. SKT made quick work of the Nexus towers and the game was over.

RNG have been a constant Worlds contender since officially joining the LPL during the 2015 Summer Split. They’ve finished either first or second in the LPL every single split beginning with the 2016 Spring Split. Additionally, RNG have advanced past the Worlds group stage every year since as well. Despite their track record, however, the team seems to always come up short. This year they were placed into an unexpectedly tough group with SKT and Fnatic. And unlike previous years, it’s highly debatable whether or not they can advance. After narrowly losing to SKT today, RNG’s position at Worlds will become increasingly questionable.

Both teams will continue their group stage run on Oct. 15 beginning with RNG vs. Fnatic at 8am CT followed by SKT’s match against Clutch Gaming at 9am CT.