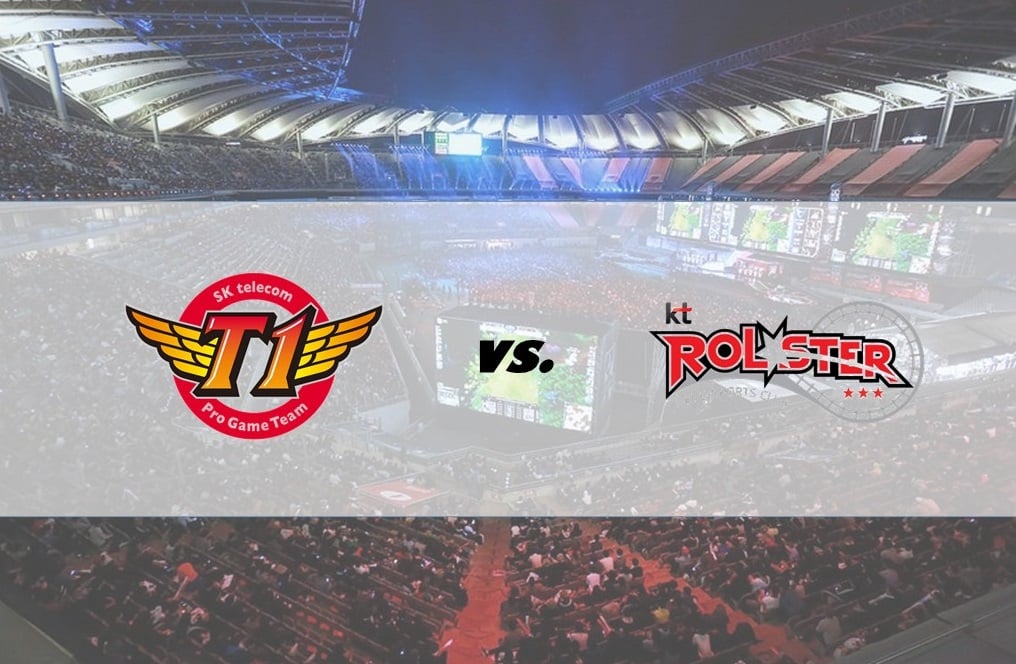 SKT vs. KT is one of esports’ premier rivalries. It started over a decade ago and has featured star players in multiple game titles, from StarCraft to League of Legends. Known as the “telecom wars” due to the primary businesses of sponsors SK Telecom and KT Corporation, the rivalry returns to the Summoner’s Rift tonight for the first time in 2017.

Anticipation for this match has been extremely high. Since the breakup of ROX Tigers and the subsequent transfer of star top laner Song “Smeb” Kyung-ho to KT, the team has emerged as the single greatest threat to the continuation of SKT’s League dynasty. To that end, KT assembled what was quickly called a super team, featuring an assortment of world champions such as we have never before seen.

But SKT didn’t sit idle either. They raided ROX in the jungle position, signing away star jungler Yoon “Peanut” Wang-ho. They reloaded again in the top lane with Heo “Huni” Seong-hoon, the latest in a rotating cast of characters. Most importantly, they still have Lee “Faker” Sang-heok, the best player in League history, as well Bae “Bang” Jun-sik, one of, if not the, best AD carries.

Sometimes super teams can take a while to get acclimated—just ask TSM. But neither of these two squads has disappointed. They carry identical 7-1 (match) and 14-3 (game) records. They are quite clearly the best in the LCK, and tonight we find out who belongs on top. So who has the edge?

The teams are pretty even on paper. KT is much more aggressive in the early game, with jungler Go “Score” Dong-bin seeking to stake out an early lead for Smeb. Smeb continues to dominate his fellow LCK top laners, but Huni isn’t so far behind. Huni has not been the laning god that former top laner Lee “Duke” Ho-seong was, but he has been a strong player and won SKT several games this split.

The new SKT member that has had to do more adjusting is Peanut. He has adapted his play style to focus on Faker, a tried and tested SKT strategy. But that has also led to some silly deaths. The two have since made it work and are looking better after some early hiccups. Still, with Faker’s propensity to trade and roam, this is a lane to keep an eye on.

The bot lane may be the best matchup we’ll see all year. It features three world champions in Bang, Lee “Wolf” Jae-wan, and Cho “Mata” Se-hyeong, as well as preeminent carry Kim “Deft” Hyuk-kyu. Both carries can destroy entire teams in seconds and both supports are extremely intelligent. Mata is more consistent and is the better innovator, but Wolf is superb at enabling the SKT carries.

KT will want to pressure all the lanes, like they’ve done all year. That can get them in trouble, especially after they take turrets, but they’ve relied on Score’s guile and leadership to great aplomb.

SKT still plays a familiar style, where they make up for a less explosive early game by fighting together around objectives. Their objective control is superb; their control over dragons is by far the best in the LCK, and the difference between them (81 percent) and second-place KT (62 percent) is nearly as large as the differential between KT and eighth place ROX (39 percent). Both teams control Baron at about the same rate.

Lackluster dragon control against the best teams sometimes got SKT in trouble last season, but that hasn’t been an issue so far. If anything, they have a propensity to go too ham, with Huni or Faker (or both) diving on over-aggressive engages, especially after they’ve already won objectives. Huni has shored up a big SKT weakness in his constant use of the teleport summoner spell, but he can be too eager to join a fight or try a big play.

Fighting over neutral objectives should be a focus in this series. KT cannot give up vision control of the enemy jungle and river if they want to keep pushing. They also can’t allow SKT to stack dragons and give Faker pockets of darkness to disappear to. That will put a lot of pressure on Score and mid laner Heo “PawN” Wang-seok. We just saw how devastating a good mid/jungle combo can be. KT will have its work cut out in this one.

Tonight we’ll learn a lot about these two teams. But it should be just a harbinger of things to come. Nobody looks capable of stopping an SKT vs. KT rematch in the LCK Playoffs, and a best-of-five playoff match should be a classic.