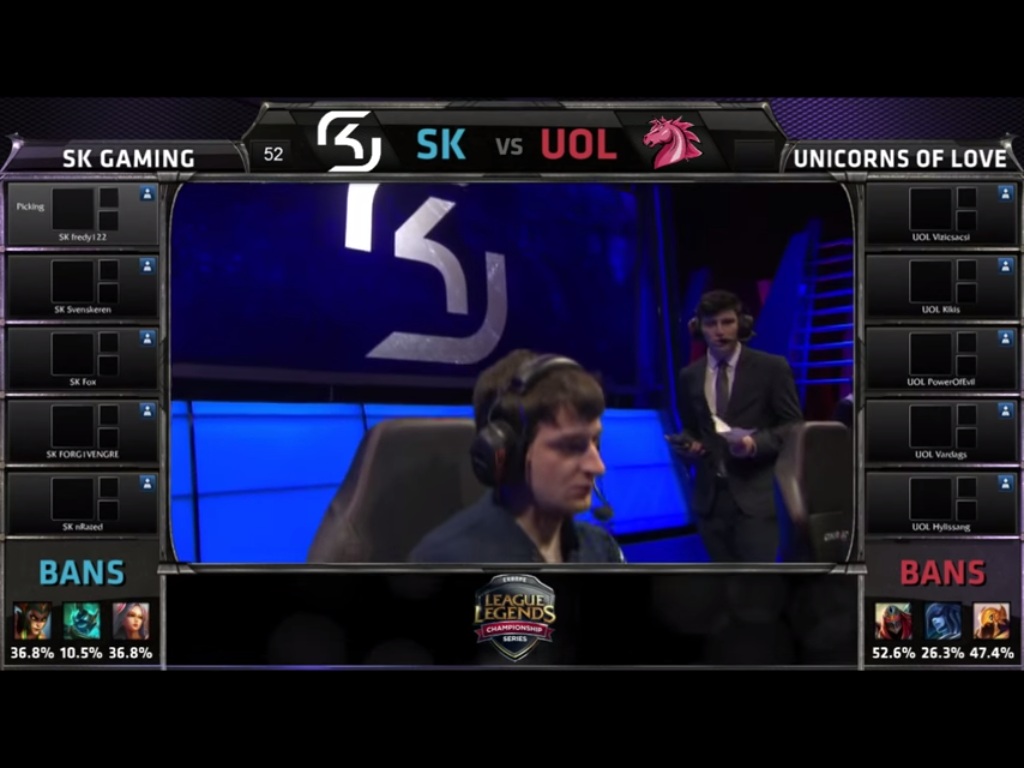 Gnar has been a thorn in the side of most professional teams since the season began. The amount of crowd control, damage, and bulkiness added by this champion make him possibly the best champion in League of Legends for the time being. That being said, few times have found a legitimate way to deal with him, other than “hope that the Gnar and his team play poorly.” Sure, Shy seemed to have something going with his Dr. Mundo pick into Gnar, but as more teams figured out the match-up it doesn’t seem to be as much of a counter as we had initially thought. However, during week 2 of the EULCS, SK Gaming may have figured out a counter that no one had thought of. Today we’re going to take a look at the pick/ban phase between SK Gaming and Unicorns of Love in order to further explore the possibility of a real Gnar counter.

Let’s start by looking at the bans. SK Gaming banned Cassiopeia, Hecarim and Irelia. I have absolutely no way of proving this due to lack of data, I believe that all three of these champions are played by Vizicsachi, and SK wanted to force him onto the Gnar. If I were the Unicorns of Love’s coach during the pick and ban, and those are top lane champions for Unicorns of Love, I would feel as though they were scared of having Vizicsachi on a strong top lane carry champion, so the logical step would be to grab Gnar.

On the other side of the table, the Unicorns of Love banned Zed, Lissandra and Azir. Though Lissandra is a global flex pick and Azir is a flex pick in EU, I believe that Unicorns of Love wanted PowerOfEvil to have an easy laning phase. Though I see him as one of the stronger mid laners in Europe, if there is a weakness to SK Gaming it makes sense to assume it is the relatively untested mid laner. Setting your own all-star player up for success against a better teams weaker players has proven to work globally, with players like Bjergsen and Faker. The other reasoning I can think of for the Lissandra specifically is that other than Lissandra, nothing has done as well as the Gnar in the top lane, so it could very well be a ban against fredy122. It was likely banned as combination of that and the horrible match-up that Syndra has against Lissandra, as I believe they knew that Syndra was going to be their pick for mid lane. Now that we’ve taken some time to discuss the bans, let’s take a look at the picks one-by-one.

First round of picks, SK takes away Rek’sai. Rek’sai brings global pressure, fantastic follow-up crowd control and good duel potential. The reason that I specifically say follow-up crowd control is that Flash/Unburrow is incredibly unreliable and hard to hit on moving targets, but it is incredibly effective against units that are already being held down by hard crowd control. Based on the rest of the picks, I assume regardless of Rek’sai being open SK was going to pick their jungler first. While I believe Rek’sai is optimal for this composition and team specifically because of her damage output in teamfights and her Tremor Sense buffing teams like SK with sub-optimal vision control, I think Jarvan would have been just as effective.

Next Unicorns of Love take Gnar and Thresh, which is exactly what I believe SK wanted them to do. It’s hard to resist taking the teamfight god Gnar if he’s available, so I can’t really fault Unicorns of Love for this pickup. Beyond that Hylissang has proven that his Thresh is significantly better than any other champion that he plays, so it’s a high priority for Unicorns of Love when it is up and it makes sense to pick it. Most other teams would have just taken the Jarvan during this rotation, but it wasn’t necessary for them to pick him up due to SK already having a jungler and the chance of Jarvan top being picked up is extremely slim.

SK decided to pick Graves and Kassadin in their next phase of the draft. Graves initially seemed like it was just being picked because Forg1ven is good on that champion, but after seeing the entire composition it was the best possible AD Carry choice. When I talk about the teams win conditions later, I’ll talk about why Graves was absolutely necessary to the composition created by SK. The Kassadin is not only a strong pick, but it works equally well in the mid and top lanes, so it doesn’t give away too much about their compsoition to UoL.

The coolest thing about this pick phase for me, is that SK managed to get three picks in without giving away much about their comp at all. We know that they are relatively high mobility, but we don’t know what the end bot lane combo will be and we don’t know where the Kassadin is going. This effectively prevents the Unicorns of Love from picking their mid laner right now because Syndra is such a risky pick into some lane matchups. On SK’s side, it kind of forces the Unicorns of Love into picking that Gnar-centered teamfight comp that SK wants to play against.

Back to the picks themselves, Unicorns of Love grab Jarvan and Jinx in their second to last round. Jarvan is the correct jungle pick seeing as they already have Gnar, and the teamfight synergy that those two champions have together is incredibly strong. The Jinx was a mistake in my opinion. Jinx has many strengths, such as incredibly late game damage, a global AoE ultimate, and some of the best siege in the game. But when you aren’t 100% sure what you’re picking into, Jinx’s lack of mobility can be such a huge disadvantage that the pick isn’t worth it. Even if we ignore the fact that top lane could still pick something like Maokai to lock down the Jinx in teamfights, I don’t even like the AD Carry matchup. Jinx is so squishy that the burst damage Graves can output in a short amount of time can kill her easily in lane. Beyond that, SK still hasn’t picked a support, so what is Jinx going to do against a Flash/stun from Annie, or a Blitz hook? Nothing. I believe the reason she was picked was to do AoE damage with Missiles and her ultimate to people inside the Cataclysm, but in my opinion it’s too big of a risk with the lack of knowledge UoL has about SK’s composition.

SK Gaming rounds off their team with Blitzcrank and Kennen. To be honest I think there were better picks than Blitzcrank, such as Annie or Nami, but he gets the job done. Essentially his job to to make sure that Jinx cannot stay into a teamfight due to the high risk of being pulled and bursted by the SK team. The Kennen is the most vital piece of this entire team composition. The Gnarvin combo capitalizes on creating terrain to set up Gnar’s ult and stun multiple people while the rest of the team chunks down the stunned members of the opposing team. Kennen’s job in this composition is essentially to get a Zhonya’s Hourglass as quickly as possible so that he can Ult and Zhonya’s when Gnarvin attempt to start a teamfight, trapping them inside the Maelstrom and stunning them before they can correctly start a teamfight. Essentially, as long as fredy122 does his combo correct, Gnarvin cannot work as intended and SK will win every single teamfight. Going back to what I said earlier, the Graves is incredibly important because Kennen won’t do enough damage to kill them while they are stunned, so the burst from Graves can do the majority of the damage needed to take them out of the fight. After that, UoL’s comp is too squishy to stay and fight over just about anything, especially with the threat of a Blitz hook onto one of less healthy members of the team.

The Unicorns of Love decide to play pick Syndra, and even though I think that was the plan from the start, I really think Orianna was the better choice. Syndra provides a lot of single target burst, but she can’t help as much in a teamfight. The Kennen could have potentially been nullified by a smart Shockwave when he came out of Zhonya’s. I could be wrong, maybe there was some other reason to pick the Syndra, but in my opinion UoL kind of fell apart with the Jinx and Syndra picks. I believe they had a plan going into the champ select, but they didn’t know how to adapt that plan as time goes on, which is one of the most vital skills for a professional League of Legends team.

I’ll end this by saying that I like both of the teams, but even if we ignore the gameplay, the planning and the ability to adapt that SK Gaming has repeatedly shown lead me to believe that they aren’t just the best team in EU, but the best team in the entire Western League of Legends scene. Unicorns of Love continue to look strong, but are clearly lacking skills that come with time and experience as a professional team.