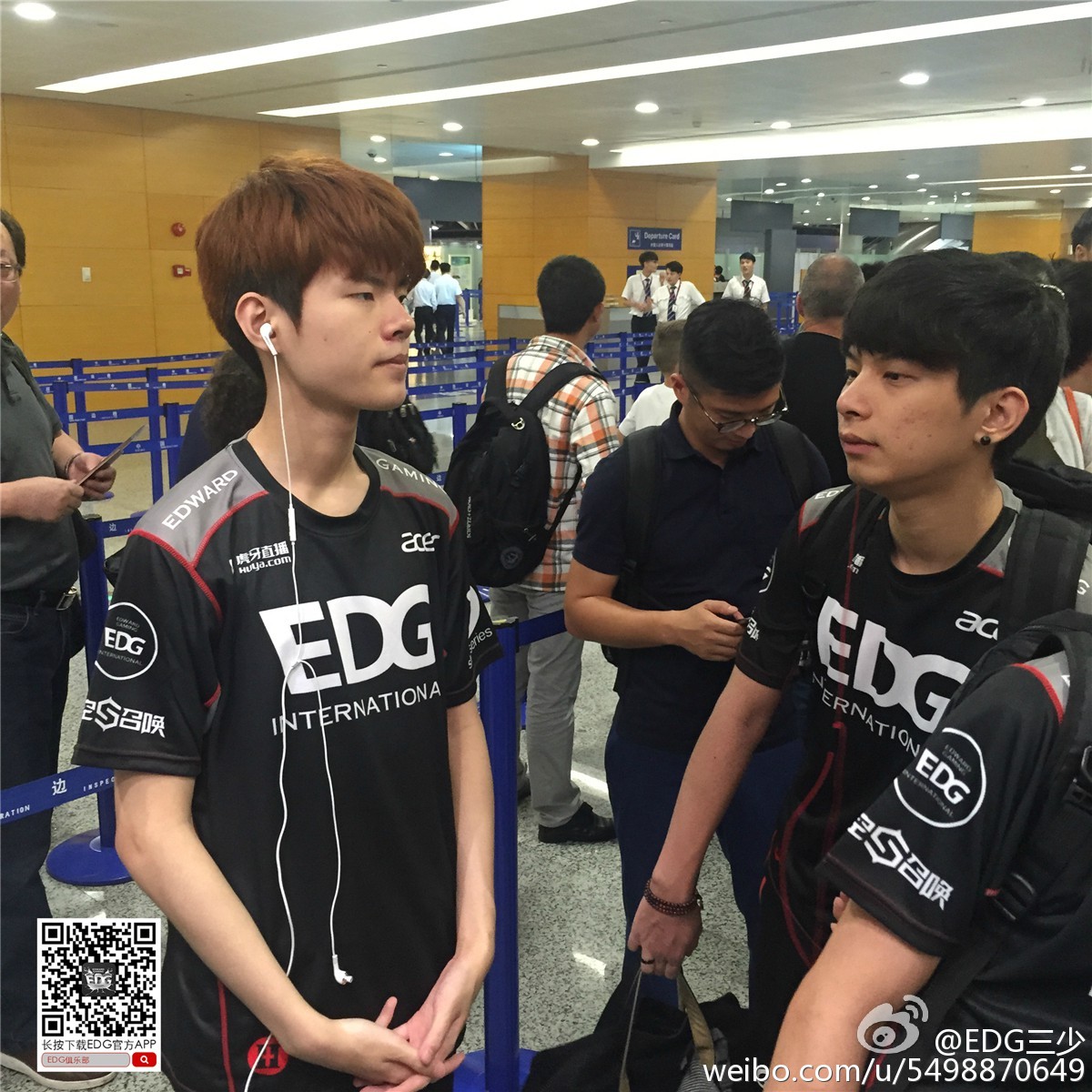 We’ve finally arrived in a stranger, more distant land, and we’re all homesick for our loved ones. In the city of lights, and under the illumination of the moon, we left on our way.

Seems like we’re almost the same as the kids who are going on summer break. Traveling is something that makes you feel excited.

Because this player has already experienced playing twice on the international stage, he’s already prepared himself. “From yesterday at 1am to now, I haven’t slept. Wait until I get onto the plane–I’ll definitely fall asleep immediately. Once I wake up, I’ll have arrived at France. Hahaha.”

Next to him–AmazingJ heard what he said. “Don’t call him, don’t call him. Hehehe. Once he’s off the plane, he’ll be reinvigorated. What an inexperienced little turkey.”

We’re almost at the airport. The team’s influence is growing greater and greater. During the security check in, there were a lot of people who recognized us. They’d ask the players for pictures and autographs.

After finishing that, it was already really late. We were so hungry, we could die! When we got to the security check point, everyone was discussing what they’d eat. I said something–there’s tasty noodles inside. When we all finished going through security, everyone darted off. It was a shame the shop was closed 🙁

We had no choice but to eat a little bit hastily.

We knew London would be a bit cold, so we were all carrying our outerwear. Our dear alpaca wasn’t holding any, so he was sent over. We purposely teased him in Chinese, so he couldn’t understand–“London is only 10 degrees. You know? TEN DEGREES!”

At first, he looked really confused. After this was translated to him, he shook his head at me. He told me firmly, “I’ll show you a Korean’s aggressiveness.” Or at least, the substance of his message was that he’d show me how aggressive he could be.

But his expression was like a spoiled kid throwing a tantrum. I couldn’t help but smile. So cute.

In terms of looking for food, we found a no-tax store.

I replied, “It should mean ‘on top of the sun.’ The store’s boss should become more prosperous everyday.”

Seeing how flabbergasted he was, I thought, ‘Young man, you only weigh a few pounds. And you’re trying to outsmart me.’

Later he said, “Do you know how captain (Clearlove) translated it?”

I thought about it–but that kid doesn’t have much culture. He couldn’t have found another way, right? I pretended to say, indifferently, “What’d he say?”

“Progress everyday! Alright! He’s won. Then what do you think this store’s name means?” I asked.

After 12 hours on the plane, we arrived at De Gaulle airport in Paris. The event sent a worker to pick us up from the airport. As soon as we stepped outside, a huge gust of wind swept by us. So this was the flavor of Paris. After we landed, one of the flight attendants said the temperature would be much lower in Paris. So we bid farewell to summer.

Everyone looked forward to breakfast and resting. Our luck wasn’t that great. We made it in time for Paris’s early morning, and wasted a lot of time on the road. All the players fell asleep in the car. We eventually arrived at the hotel. But this isn’t necessarily good news for us.

This is our third time at an international competition. Usually, they leave a good impression–before, at the Season 4 World Championships and MSI–whether it comes down to planning, little details, the location of the hotel–it all leaves a very lasting impression. If I could use one word to describe it, I’d use “professional.”

But there’s lack in quality this time around. We got to the hotel on time like they said–we were supposed to check in at 12pm.

After we were picked up, they changed the time to 3pm. After we landed in Paris, we had to wait 9 hours. We had two choices. We could–number 1–wait in the cafeteria until 3pm. Number 2–go out and walk around until 3pm. To be honest, I didn’t like either choice. We’re not here to have a vacation.

My players needed rest to fix their jetlag. I didn’t know how this would turn out, and how there ended up being problems. In the end, we decided to gather everyone and meet in the cafeteria.

After arriving in the hotel, they were thirsty and hungry. So we started choosing beverages and food. Koro looked curious, and chose an interesting green colored drink.

After drinking a little, I recommended everyone try it. In order to get Deft to drink some, it could be said our players used a variety of acting skills, but what a pity–he wouldn’t fall for it. They almost finished the whole bottle. He shook his head, eating his popsicle.

But we didn’t think KaKAO would take the bait!

That drink was filled with vegetables. And the most important ingredient was the hot chili pepper blended inside. It truly was unique. In order to entice him, I even drank a little.

Our translator also got in touch. Usually, he’d prioritize the topics he was supposed to tell us. It’d start off with some details about the games, our place at the venue, and the time and place to practice, and relax.

This time, he told us this place was really dangerous. At the hotel entrance, there’s an overpass–and they emphasized that you cannot walk through it. That’s Paris’s most dangerous place.

You can get robbed there, and there are a lot of drug and narcotic users there. There was also a murder case there. It’s a place with a high crime rate. At night, it’s best not to go out. If you have to head out, then leave in a group.

This gave our supervisor a lot of stress. After all, I could see the overpass right from our hotel entrance.

To me, that overpass was a place of hell. We better hold a meeting to forbid all players, at any time, to leave the hotel. If anything were to happen and they had to leave, they’d have to inform us and arrange to set something up.

Otherwise, Paris’s atmosphere was really nice. The sun was out, warming us up–and it was really comforting. The venue’s surroundings was a forest, and it was covered in shade.

Walking on the small path was like placing ourselves in a college campus.

Taking in the atmosphere and the wind was so comforting for me–I lifted my head, and admired how blue the sky was.

We continued walking to that distant location. A small, silver white speck appeared  in the sky. It came closer and closer, and it transformed into a bean–and it then turned into an airplane. It was so far away from us. So far… so far. And yet, it was so clear and distinct.