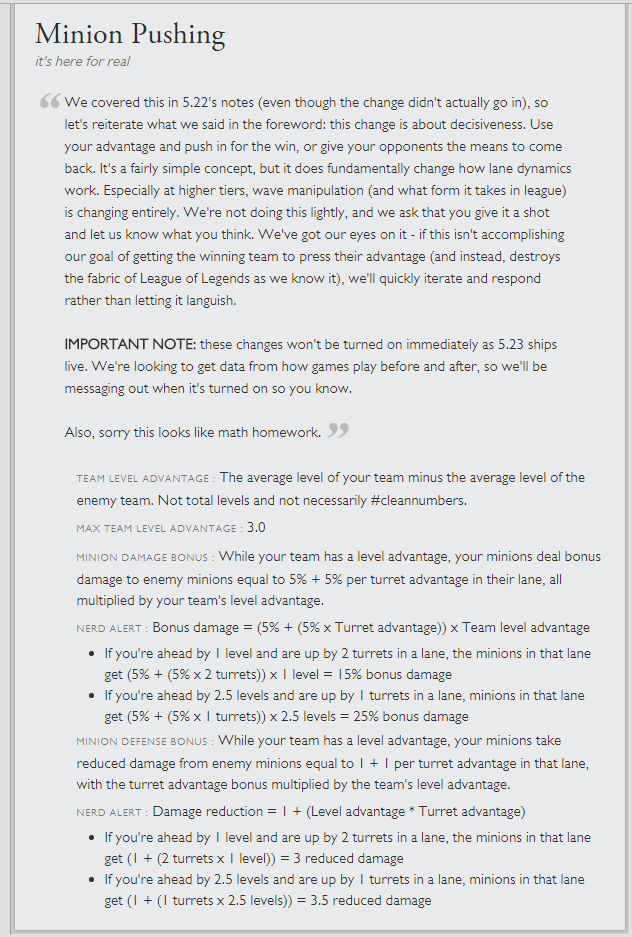 From time to time, Riot blunders in patching League of Legends. Sometimes they leave overpowered elements in the game unadjusted for long times, such as Cinderhulk; occasionally, they implement a change which is reverted in some manner after it effects the game in a way they did not intend, such as Patch 5.7 creating AD Fizz. Recently, they changed the game before the 2015 World Championship with the Juggernaut Update in 5.16, creating an unbalanced and sparsely practiced Meta for the tournament. Now, as Riot prepares for patch 5.23, the grandest of all blunders seeks to spoil the game— the minion pushing changes, shown in the image below.

These changes are vomit-inducing to analysts and notable Esports personalities like Christopher “MonteCristo” Mykles. They dismantle what has been the core of macro strategy of the game since Season 2 by preventing players from controlling the minion wave. They encourage a meta-game which Riot has patched against in previous years, shifting the game heavily in favor of early game comps with tower killing prowess. Riot supports this decision with a flimsy argument that is already applicable in the current state of the game, which begs the question of why implement the changes? Riot is contemplating enslaving the minion waves, and we as players should voice our concern for what implications on the world’s most popular Esport, but in our own casual games.

DEATH OF A CRAFT

So how exactly do these minion changes affect the game? Simply, they magnify the power of a snowball by giving the winning team a pushing advantage. If you have a level lead as a team or a tower lead, your minions will be stronger than the enemy minions, and push the waves. Why is that disastrous? Because it violates wave manipulation, which has been a fundamental part of the game. Former INTZeSports Analyst Shakarez put out a youtube video which demonstrates how long teams have been using wave manipulation techniques and their importance to the game.

The techniques Shakarez mentions – freezing, slow pushing, and catching waves – will all be affected by the minion changes. As the damage minions deal and receive varies in each individual games, players will have to relearn how to use these techniques. Suddenly, players will have to learn and memorize how many minions they need to keep alive on the enemy wave to freeze the lane for each different percentage of damage and reduction—if they forget, then they will fail to freeze. This notion applies to creating a slow push as well: if the enemy minions are stronger than yours, then you will need more minions in your initial stacked wave to create a slow push, and that will vary as the enemy has a larger advantage than you. Extensive play testing is going to be required to learn how to adapt minion wave control in numerous scenarios.

The minion changes encourage an early game tower killing playstyle by rewarding the taking of towers with stronger pushing. If you recall, the minions’ tankiness and damage increases with two variables: the average level advantage of a team, and tower leads. The fact that a team can strengthen their minions by taking towers means that will become a priority for teams, because it gives them an immediate boost in pushing power. This shift in priority will result in a tower killing centered meta that devalues neutral objectives, while also steamrolling the already developed fast pushed meta we see.

Looking back on the KeSPA cup, most early games lane swaps were executed with lane swaps that we have seen in the LCS 2015 season: both teams group with four members in the side lanes and push down the tower, ensuring the wave bounces to prevent the enemy from freezing it deep in their territory. Other alternatives exist, but they will likely disappear if these minion pushing changes go through. Teams will stop trying to contest a tower push because if they fail to defend the tower or they don’t trade a tower of their own, then they immediately fall behind in their ability to control the side waves in their favor. It will be easier just to trade towers and ensure neither side gets a pushing advantage.

This devolution of strategy will take us back to an era of lane swaps we saw in Season 4 with teams pushing down outer and inner towers for the first several minutes of the game. Why the inner tower as well as the outer? Because of the additional buff to the pushing power of minions. If one team can take the inner tower while the opposing one cannot, then that team automatically has a stronger minion wave to work with and can create more map pressure to take other objectives. While we will not likely see that regularly in competitive play due to how far ahead a team has to get, it still exists within the game and teams will look to take advantage of that mechanic.

What’s peculiar about this possible development of strategy in League of Legends is that Riot has patched to combat a fast push tower meta in Season 4. In attempts to dissuade fast pushing lane swaps, Riot adjusted tower’s stats to include damage reduction on attacks from champions in the first few minutes of the game, along with other changes in Patches 4.1 and 4.7. Since teams will likely once again return to fast pushing down towers in order to prioritize minion’s pushing strength, Riot will once again find themselves patching to dissuade such a playstyle born from the change they implemented into the game itself. The easy solution to avoid running into this cycle of patching is to not launch the changes which will spark it.

Riot Axes recently took to the League of Legends Board to speak for Riot on the minion pushing changes, which can be seen at the following link: http://boards.na.leagueoflegends.com/en/c/developer-corner/TkyL9LkL-on-the-minion-pushing-changes-in-523

To paraphrase his post, Riot Axes suggests that giving the winning team’s minions stronger pushing, it automatically creates situations where that team has pressure in their lanes, while also giving the losing team funneled gold and experience. In his, and therefore Riot’s, argument, the fact the losing team will have the lanes pushing into them means that they have an opportunity to catch up through farming. While that is an element to the comeback potential, what Axes fails to recognize is that mechanic already exists within the game as a result of player behavior, and that the losing team also loses control over their lanes if their minions are weaker.

With weaker minions, players either have to build up more minions in the wave to have the wave push on its own, or stay in the lane to push it. That extra time that person has to spend in that lane is free time for the enemy team to press their advantage with superior numbers; while that one person is on the bottom side of the map dealing with a minion wave that always pushes in, the enemy team can threaten Baron. Additionally, if the losing team’s minions are weaker, it is more difficult for them to set up the side waves to create pressure on the enemy towers—they either require more minions are must accompany them, once again giving the winning team more advantages. With it being more difficult to chip away at towers with side waves for the losing team, that team has a harder time taking down those towers to get the gold to help their comeback. While Riot wants to believe these changes are fair to both the winning and losing team, they are not.

Now, is it a possibility that we could be blowing this issue out of proportion? In a numerical sense, yes: Riot has shown us the math in their board post and the resulting changes in minion damage are quite small in normal circumstances. It is a possibility that these changes won’t drastically alter the method behind the techniques of wave manipulation, and players could adapt swiftly. These changes could be so miniscule that no one would notice it. But if that is the case, then why even implement the change to begin with? If it fails to make an impact within the game, while unnecessarily overcomplicate the game with a mechanic so subtle no one would notice it.

So what can you, the reader, do to make an impact on this change? If you don’t care at all about these changes, then you can simply be done and go on playing League. However, if you think that these changes will be bad for the game, both at a competitive and casual level, and want to make a difference, then click on the link below and sign the “Save the Waves” petition. Our goal is to get 10,000 signatures by December 1st. Furthermore, we’re going to look to reward those who contributed their voices to the Save the Waves campaign by giving away a $10 RP gift card for every 1,000 signatures, distributed randomly to one of the signers. Additionally, if we reach our goal of 10,000 by December 1st, we will give away a $50 RP gift card to one of the signees. When you sign the petition, be sure to tweet @RiotGames about your desire to Save the Waves.