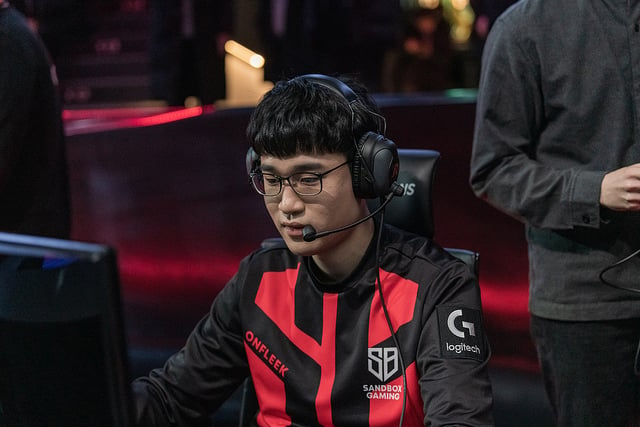 SANDBOX Gaming jungler Kim “OnFleek” Jang-Gyeom offered an outstanding display of skill in the KeSPA Cup semifinals against T1 earlier today by picking up a pentakill with Olaf.

This move happened in the last game of the match, which SANDBOX won 3-1. SANDBOX were already crushing T1 when this happened at the start of the mid game.

T1 attempted an engage against SANDBOX with a Rakan ultimate by Lee “Effort” Sang-Ho, but he missed it due to a perfectly timed Stopwatch from Kim “Dove” Jae-Yeon’s Orianna. SANDBOX players shut them down one-by-one and OneFleek scored a pentakill by chasing down both remaining T1 players after getting a triple kill. T1 were aware of OnFleek skills on Olaf since they banned the champion in two out of the four games of the match.

T1 struggled to establish their playstyle in this semifinal match. The last game was filled with missed opportunities. It kicked off with an invade attempt that almost ended in a bloodbath for T1 even before the minions spawned. Then, they missed a risky dive in the bot lane and gave the first two kills of the game to Han “Leo” Gyo-Rae’s Miss Fortune.

OnFleek’s pentakill was the death blow for T1. SANDBOX players took two Barons, pushed T1’s base, and ended the game in 33 minutes.

The English broadcast of the match between SANDBOX and T1 can be watched here. DragonX and Afreeca Freecs will face off in the second semifinal match tomorrow, Jan. 4 at 2am CT on this channel.