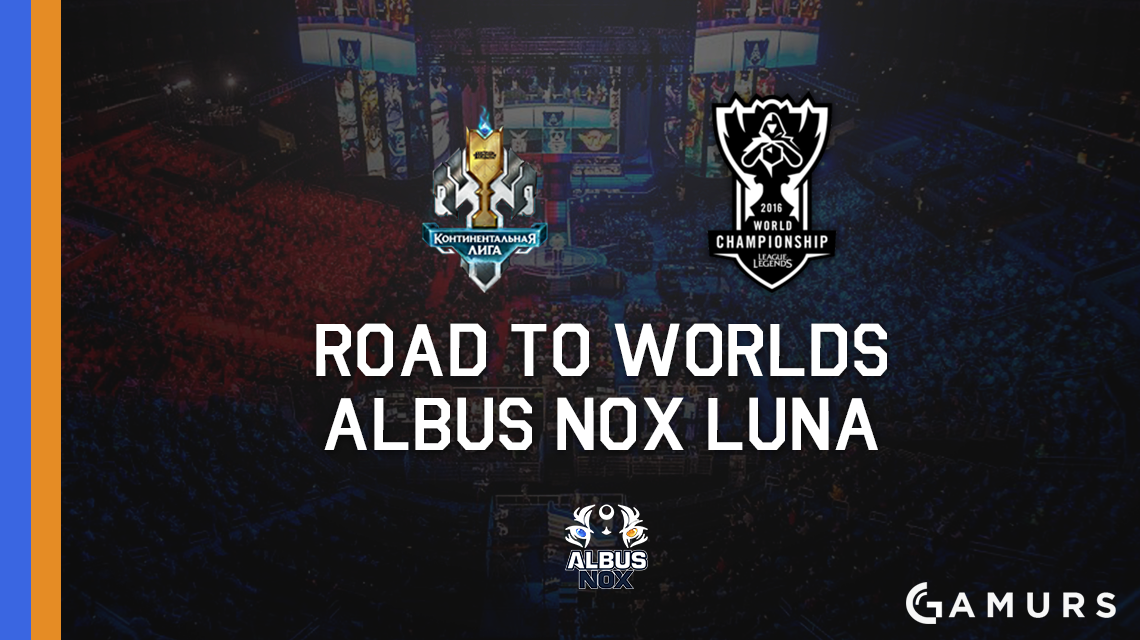 A GAMURS exclusive series, taking a look at the 16 teams goingto Worlds from the beginning of their qualification and see justhow their road to worlds went. Today, we look at Albus NoX Luna,formerly “Hard Random” of the LoL Continental League (LCL)

The Masters of the LCL

For those unaware, the LoL Continental League is a tournamentfor the Russian/CIS region. This league takes over the StarLadderSeries and will follow the same rules/format as the EU/NA LCS. Itis one of eight leagues featured in the International WildcardCircuit and the domain of Albus NoX Luna, formerly known as ‘HardRandom’ in the Spring Split 2016.

ANX, known as Hard Random (HR) in this split would start off inthe newly formed LCL league as favourites due to their overwhelmingdomination of the StarLadder series. It was a chance for all teamsto stake their claim as the best of the best to go forwardinto the playoffs with a shot at going to the qualifierfor the Mid-Season Invitational. The league used thefamiliar best-of-one format with the top four teams going into theplayoffs, similar to how the EU and NA systems used to be.

The Spring Split would see HR dominate for the majority of itsgames, earning a 12-2 record to be crowned the first eversplit champions of the newly-formed LCL and easily walk into theSpring playoffs as the No. 1 seed, having only lost those two gamesagainst 3rd-placed Natus Vincere CIS and 4th-placed Vega Squadronthroughout the entire split as a whole.

The Spring Playoffs would see HR play against Vega Squadronwhere, after a lacklustre showing from Vega, HR won 3-0 towalk into the finals to meet Team Empire and bring the LCL itsfirst ever final. Team Empire would maek the hearts overHR fans skip a beat after taking a game, but it was notmeant to be as HR took the other three games to see them gointo the International Wild Card Invitations as the LCL’s firstever representative.

Going out on a whimper

This would be HR’s last ever appearance on the world’s andcontinental stage as a whole before they changed into ANX andthey were looking to end it by heading to MSI 2016.

The International Wildcard Invitational for MSI took the topteam from the leagues in Brazil, CIS, Japan, Latin America North,Latin America South, Oceania, South East Asia and Turkey tobattle it out for a spot to attend a world’s stage event. In thisinstance, it would only be the winner who would be getting to MSIand HR were one of such teams hoping to make their mark on theworld’s stage early.

It would be best-of-one in the round robin, with best-of-fiveseries only coming in as the final four teams fought it out todecide which team would make it to MSI in China.

The stage would be close knit until the very end with only twoteams able to fight it out for that all important space on the MSIcircuit. Three teams would find themselves being tied for firstplace, leading to a tie-breaker situation between SupermassiveeSports, Hard Random and INTZ e-Sports. HR was the first tostrike, taking out fellow Worlds IWC team INTZ e-Sports, but theycould not get past SuperMassive and lost in an unconvincing fashion3-1 to just miss out on the holy grail of the split.

They were forced to head home defeated, but notforgotten.

Birth of the Tiger

On May 23 2016, a few days before the official start of the LCLsummer split, Albus NoX Luna would be born from Hard Random’sLegacy. And if HR were a force to be reckoned with, their was atrue tiger-like roar in the LCL with this team.

Where HR would impress in their summer split, Albus were to goone step further. HR only lost a single game in thebest-of-one matches to the team that would finish fourth, NatusVincere CIS. They would nearly become the first team in the LCL’srecent history to go undefeated, a feat not even possible in mostleagues around the world, and looked to carry on their impressiveform into the summer playoffs.

Tornado Rox would be the first team to know the tiger’s bite inthe first round of playoffs, as Albus stomping their way intofinals 3-0. If they felt the finals would be a textbook win,however, Vega Squadron were not going to let them go on thateasily. Vega would take the first game, cornering the tiger andproceeding to continue the carnage all the way into the second gameto leave Albus tilting on the exit after such impressive form.However, ANX pounced and fought and made their dominance knownby taking the next three proceeding games to take the series 3-2and reach the International Wildcard qualifiers.

As any other team of the eight regions attending qualifiers, thiswas the moment you fought for. ANX were looking to securetheir face and get their newly formed organisation into Worlds atthe first ask, but they had a mountain to climb. ANX werelucky to survive, finishing fourth in the table having lost to bothINTZ e-Sports and Dark Passage. They were, however, the only teamin the entire tournament to take down Lyon Gaming, who finishedfirst in the group stage.

ANX, finding their stride, would see them put up against LyonGaming of LatAM North. ANX were the only team to be able tofind a way past Lyon, so would the tiger strike again?

Lyon Gaming would be the first to strike, however,ANX would strike right back to take the series 1-1. It wouldbe a grueling set of five matches that would leave everything tothe final game. However, with Lyon faltering at the final hurdleand an impressive ANX side showing up, the tiger would be ableto dethrone the lion and take that all important place into Worlds2016.

And that, ladies and gentlemen, is Albus NoX Luna’s “Road toWorlds!”