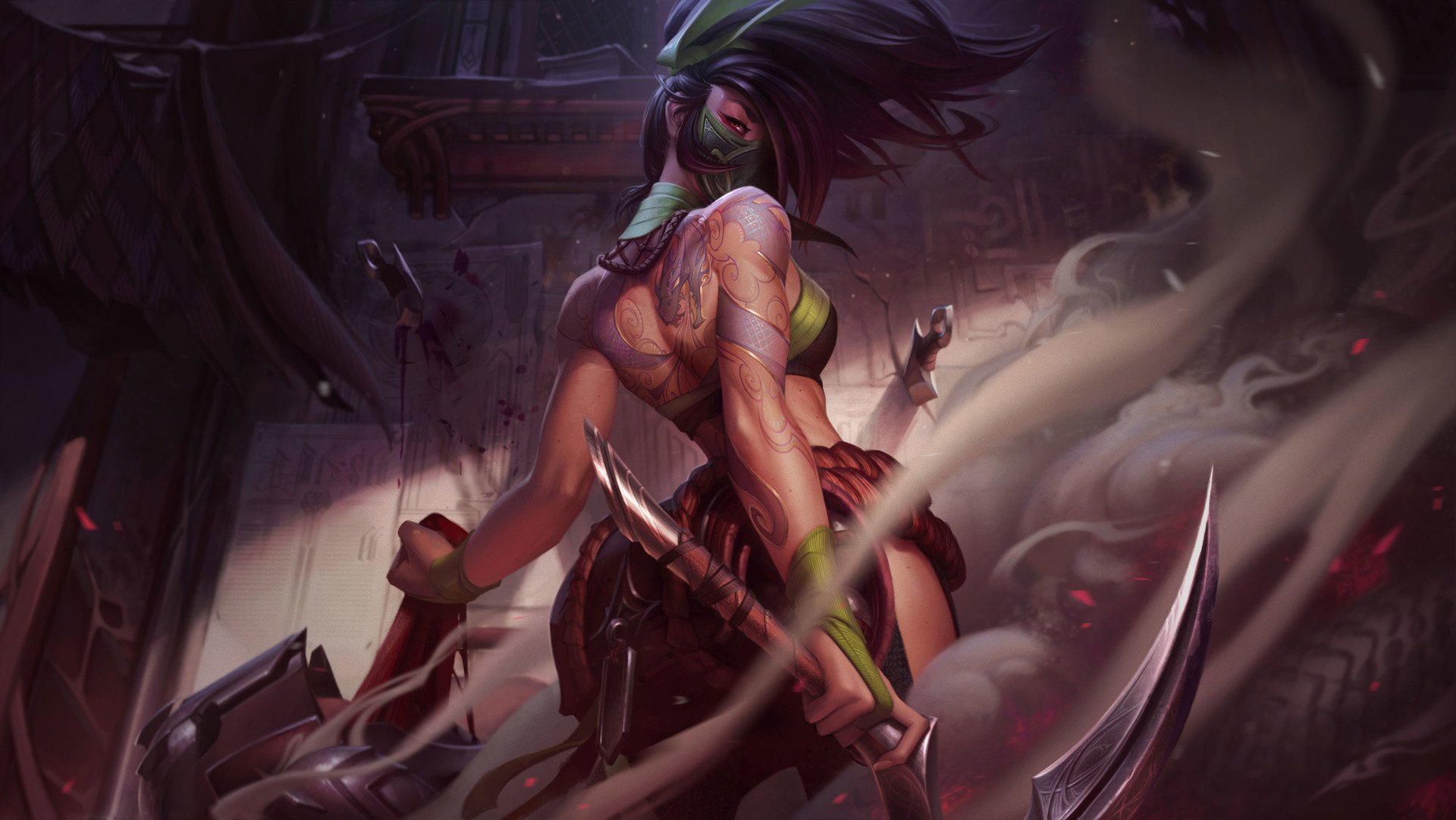 A new piece of League of Legends lore titled “The Bow, and the Kunai” was recently published. It documents a young Akali and her friends’ lives growing up in a war-torn Ionia.

The story begins with an Ionian neophyte named Faey who has secretly gone on a mission with a few other younglings to hunt a silver boar. Faey’s well-coordinated plan falls apart when a nine-year-old Akali interrupts the hunt in an attempt to take down the boar herself. The silver boar manages to escape in the chaos and Faey scolds Akali for ruining her plan.

The hunting party returns home and is immediately confronted by the tribe’s leader and Akali’s mother, Mayym Jhomen Tethi. Most of the group blames Akali for their failure, but Faey steps up and takes responsibility for the whole mess. Mayym tells the group they won’t eat that night as punishment for their actions.

The matriarch then speaks privately with Faey. The pair discuss their people’s role in keeping the balance between the material and spirit realms, as well as the future of Faey and her fellow neophytes. Mayym tells her pupil that she can’t become a full warrior until all her colleagues are ready to be initiated. This frustrates Faey, but she says nothing out of respect for her master.

Meanwhile, Akali practices the art of calligraphy in an attempt to win her mother’s favor. She’s then visited by master Kennen. Akali opens up to Kennen and questions why her mother pays more attention to Faey than her own daughter. The yordle ninja tells Akali that Mayym made a promise to care for Faey after her parents were murdered, which Akali sympathizes with since her father was killed as well.

Kennen then travels to meet with Mayym to discuss what action to take next against the growing threats of Noxus and Zed’s rebels. Kennen urges caution while Mayym demands action. Shen, the recently elected leader of his people, suddenly appears. He admits he can’t be impartial when deciding what aggressive action to take since his feelings are plagued with his hatred toward Zed for betraying his clan and murdering his father. With no one agreeing on one action to take, the meeting ends with no progress achieved.

Faey travels to the nearby lagoon that evening and runs into Akali. Akali gives her a plum as an apology for ruining the hunt earlier that day. Faey sympathizes with Akali, viewing her as a sister, and splits the plum between the two of them.

A few days pass and Faey practices her archery in solitude. She ruminates on her life, her people, and the danger that faces them. Faey grows further frustrated that Mayym hasn’t initiated her, so when she’s told by a fellow neophyte that Akali and other younglings are sneaking out of the village to play against Mayym’s orders, she joins them.

Faey rendezvous with the group, but finds them hiding in fear up in the trees. A group of Noxian-controlled Ionians known as the Navori Brotherhood is approaching. Instead of retreating, Faey takes charge and concocts a plan to drive the invaders away. She and the rest of the group hide in the tops of the treeline and try to trick the Navori into believing the forest is haunted. Faey orders Akali to stay at a distance and return to the village to warn the adults if the plan fails.

Faey’s plan goes off without any major snags and the Navori retreat in fear. Just before she can celebrate, Faey turns around to see that the rest of the group is being attacked by the land itself, which has been possessed by a corrupted spirit born of the Noxian invasion. Faey struggles to save her friends before Akali suddenly appears and distracts the spirit against Faey’s orders.

The duo manages to save the other neophytes, but Akali is suddenly ensnared by the spirit. When Faey tries to save her, the spirit strikes back and smashes Faey’s leg into pulp. Akali manages to break free and rush to Faey’s side. The pair seems doomed but is suddenly saved by the arrival of Shen, Kennen, and Mayym, who slay the spirit.

Faey awakens back at the village. She realizes that she can never walk again and will never become one of the initiated. Akali tries to comfort her, but Faey lashes out and blames her for the whole disaster. Akali leaves Faey feeling hurt and confused.

Mayym goes to Faey and promises that she, Kennen, and Shen will find a way for her to walk once more before embracing her pupil. Akali eavesdrops on the conversation and feels jealous that Mayym shows more compassion toward Faey than her own daughter. Akali retreats into the woods in tears and the story concludes.

This story is listed under Akali’s character on the League universe website, but it can be argued that it’s more about Faey than the rogue assassin. Perhaps this short story is a tease for a Faey champion release, who would likely fill in the marksman role due to her proficiency as an archer. This story could be explored further in the upcoming short lore cinematic Riot Games discussed during its 10th-anniversary celebration.

Regardless, this short tale is a gleaming example of the type of compelling stories that can be told within the world of Runeterra.