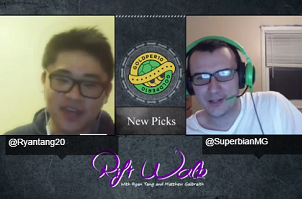 This is the first release of our new weekly series inspired by the ESPN talk show, Pardon the Interruption. Future plans for the show include a more consistent 40 minute run time, guest hosts and an improved overlay. You’ll probably notice that our twitter tags were accidentally reversed on the overlay, and Ryan’s head got cutoff a few times. So we do apologize for that.

Below you’ll find a run down of the topics we covered.

If you have any comments or suggestions for the show, please post them below!