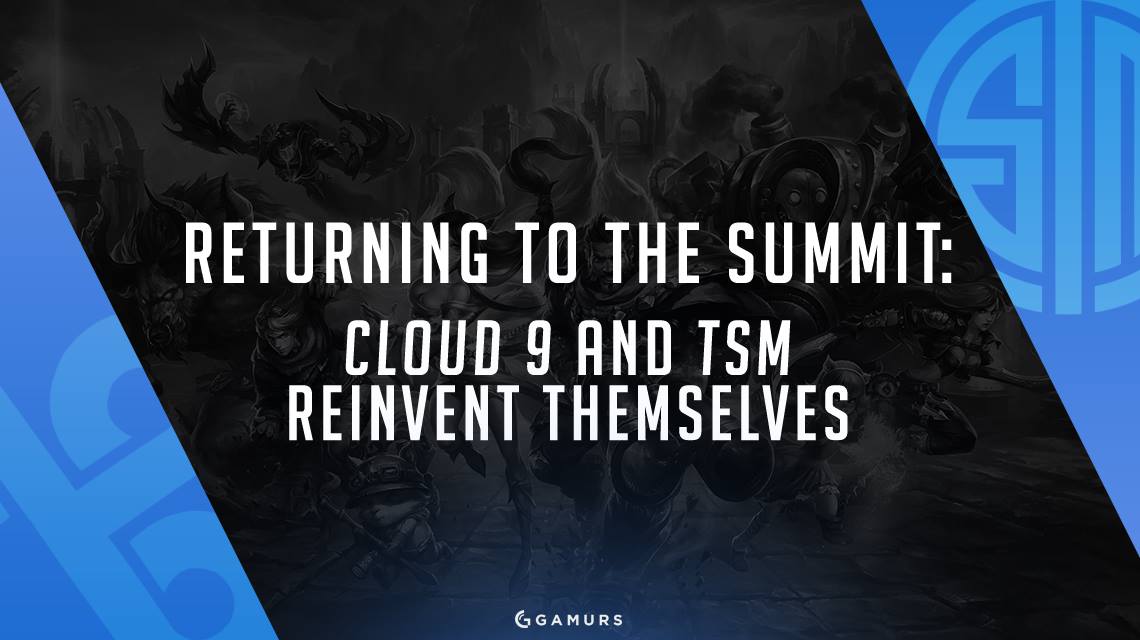 In the era of the League of Legends Championship Series, no rivalry has been as longstanding as that between Team SoloMid and Cloud9. Over the past three years, it has taken on different characteristics: the new blood versus the old guard, the tried-and-true against the ever-adapting, and, most bluntly, brain against brawn. This past year, back through the World Championship, both organizations struggled with declining talent, and each approached fixing the matter differently.

C9 and TSM were antithetical of one another. Cloud9 maintained the same roster for close to two years, while TSM imported or recruited various talents to fill the supportive positions. C9’s claim to fame was its unique approach to macro play that sought to outsmart the enemy, embodied in Hai “Hai” Du Lam while TSM relied on the raw mechanical talent of Søren “Bjergsen” Bjerg in its darkest hours.

These parallels maintained for two years, with the favor slowly swaying from C9 to TSM. The men in white and blue stood victorious in summer 2013 and the following spring, but it was the team whose name is chanted fervorishly at every opportunity that took summer 2014 and spring 2014.

But they eventually hit a ceiling. Internationally, they were never in a condition to truly spar with the best foreign teams, primarily because of individual weaknesses. For TSM, it was Marcus “Dyrus” Hill, the rock of North America. Proficient as a tank and utility player, Dyrus was good enough to be left alone in the top lane, bullied down by the enemy, and for TSM to still emerge victorious. But he failed as a carry player, and against Korean top laners with a penchant for that style, he was a permanent weak point. Other issues, such as Jason “WildTurtle” Tran’s positioning and a systemic communication problem in the team further complicated the matter.

In C9’s case, it was Hai. Though his leadership was instrumental in helping the team keep pace, he could not keep up with elite mids on a mechanical level. Eventually, his skills deteriorated to the point where C9 could not stand to win within North America against TSM–partially due to wrist injuries– which led to a short retirement before dire circumstances called him back as a jungler, and then a support.

Roster moves were utilized to remove those ceilings, and over time the teams indulged themselves more. TSM experimented  with junglers and supports over the years, then in 2016 it replaced everyone except Bjergsen. It replaced Dyrus with Kevin “Hauntzer” Yarnell, and acquired  Yiliang “Doublelift” Peng, Bora “YellOwStaR” Kim, and Dennis “Svenskeren” Johnsen. The lineup was considered a super team, which failed to meet that expectation up until the spring playoffs.

C9 was slower to change–it replaced Hai with Nicolaj “Jensen” Jensen, a european whose competitive ban had recently lifted, for summer 2015. It was then forced to use Hai as a replacement for William “Meteos” Hartman, a move that helped the team push through to attending its third consecutive World Championship. Afterwards, C9 eventually found a proper jungler in Lee “Rush” Yoon-jae. It further looked to bolster its strength by upgrading its support position with Michael “Bunny FuFuu” Kurylo, but the team’s dependence on Hai for leadership led to it primarily using him as support.

After a rough split for both, the rivals met in the quarterfinals of spring 2016–a far cry from the finals they were used to. C9 took the first game commandingly, but TSM smashed the subsequent games as the players finally started to synergize how most anticipated they would–something attributed to the coaching of Weldon Green.

C9 hadn’t raised its ceiling–Hai would forever be a temporary fix that could not make up for his individual deficiencies. Additionally, An “BalIs” Van Le continued decline since 2015 was not stopping. His positive contributions dwindled as he became a ghost of the great player he used to be, and nothing was going to reverse that.

Meanwhile, TSM pressed on to the final after defeating Immortals, the favorites of the season. It met Counter Logic Gaming, its rival from Season 2, and Doublelift’s former team. CLG’s teamwork, based around compensating for each members respective weaknesses, won out in a bloody five game series.

YellOwStaR and TSM parted ways after that, most likely because of dissynergy. TSM wanted to give authority to Bjergsen and Doublelift, reserving YellOwStaR, a person heralded for his shotcalling, as a playmaker. This misuse of YellOwStaR, along with the mismatch of his passive playstyle and Doublelift’s desire for aggression, saw the deal end, and YellOwStaR returned to his original team, Fnatic.

Doublelift’s reflection on his time with YellOwStaR, seen in TSM Legends, highlights the duo’s failure to synergize. “I think the point of a duo is to cover each other’s weaknesses, and you combined your strengths to make something better than the strength of two people. With YellowStar, we had two big strengths, but when you put it together it was never more than that.”

TSM was in need of a new support. C9 had to replace its top laner and stop using Hai. The way the two organizations handled these respective roster changes adds yet another contrast to the rivalry.

C9, on the other hand, secured a deal to buy Jung “Impact” Eon-yeong from NRG Esports, which led it to tryout Meteos for the jungle spot, as using Impact and Jensen used up its two import slots. The move might have been temporary if it were not for a rule change to residency that made plans to use a lineup involving Rush impossible. In addition, C9 brought on Bok “Reapered” Han-gyu as a coach to improve communication, a skill he is widely admired for.

So far, both teams see positive results. TSM sits 4-0 in the standings, and have only dropped a single game. C9 is tied for third, but has so far proven to be able to go toe-to-toe with Immortals, and Meteos hasn’t missed a beat during his time away, something he considered to be needed.

“Being on a team is very similar to being in a relationship, except it being two people it’s with people.” Meteos explained in an interview. “If issues aren’t handled correctly… it can become destructive. So we just got to this point where we weren’t really working together at all.”

He also detailed an important change to C9’s communication: “On this iteration of C9, we sorta did away with that whole one man shotcalling. We’re working a lot more as a team now, which helps.” This is most likely a result of Reapered’s coaching, and has improved the team’s performance without Hai.

TSM parted ways with a veteran and replaced him with a new talent. C9, on the hand, turned to wisened competitors, both as players and support staff. This places two schools of thoughts, trust in the old guard and faith in new blood, against one another when these teams respark a nostalgic rivalry tonight.