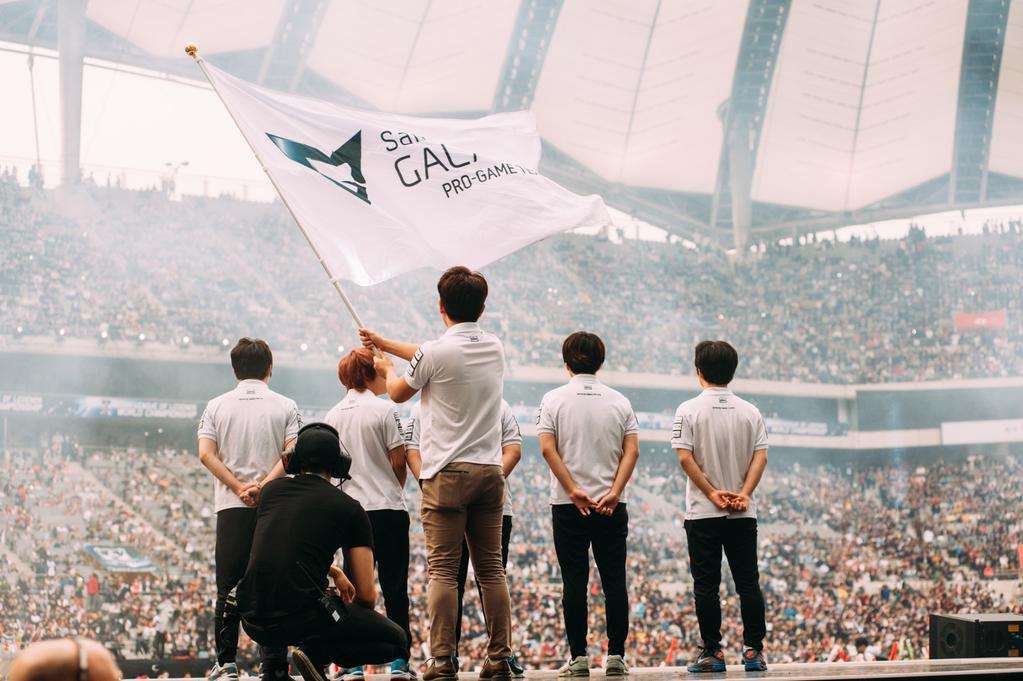 They had done it. Game over. Headphones off. Time to celebrate. Heo “PawN” Won-seok and his team, Samsung White, had won the 2014 League of Legends World Championship in their home country of South Korea. Cue the music. PawN had only joined White in February of the year, obtaining a World Championship only 8 months later. Won-seok had witnessed the team dominate the competition during the OnGameNet Winter and Summer seasons (despite not winning a title) before dropping only two games to the competition during the World Championship in October. The team’s players had become legends in the eyes of the community.

Looper, the front line tank and master of teleport. DanDy, the aggressive jungler with a versatile champion pool. PawN, the rising talent and assassin specialist. Imp, the unpredictable marksman. And Mata: strategist and god of vision control. The team won games through a strong lane phase, adaptation, and through ideal trades; they weren’t hyper-aggressive players who would always beat you through mechanics, but rather they would find your achilles heel and apply pressure where you were weak. White’s partner team, Samsung Blue, would share a similar playstyle to the World Champions. Blue – losing to their sibling in the World Championship semifinal matchup – used intelligent positioning, team fighting, and late game strengths to slowly melt their opponents into defeat. Many would argue that the pair were easily the top two teams in the World at the time of the championship, and that either team would have defeated the second-place Chinese team, Starhorn Royal Club. What was it that would allow the Samsung organization to obtain players that were championship-worthy across the board?

Shortly after the 2014 season finale, the Samsung organization and the ten players who made up Samsung White and Samsung Blue would disperse. Monetary incentives from Chinese organizations would draw all ten players to join teams in China’s LPL. Master3, World Elite, LGD Gaming, Edward Gaming, and Vici Gaming would sign the ex-Samsung players. Despite the success and size of the parent organization, the team that held the 2014 title would have to rebuild for the coming season: a difficult task to take on, considering the talent and growth seen from their previous roster. The players, the staff, the organization would have to reboot to stay competitive in Korea’s OGN Champions.

Rewinding a year before the happenings of the 2014 World Championship, 2013 would see Samsung Galaxy Ozone, formerly MVP Ozone, enter the World Championship group stage with a disappointing performance. Featuring Looper, DanDy, dade, Imp, and Mata, the roster would both seem to enter the competition without significant preparation and without properly adjusting to the current patch. Midlaner dade would be stuck on champions from “yesterday’s meta” and the team would drop games to teams such as Fnatic and Gambit Gaming, thus failing to make it into the elimination stage of the tournament. This causes the Samsung organization to begin to build up Ozone’s sibling team: Samsung Blue.

Samsung Blue’s initial impact on OGN Champions was minimal at first, clawing their way into the bracket stage of OGN Winter before going 0-3 to defending World Champions and the eventual winner of the Winter tournament, SK Telecom T1 K. The Blue team would consist of Acorn in the toplane, Spirit in the jungle, PawN in the midlane, Deft at AD Carry, and Heart at support. This team would struggle to find success during the early parts of Season 4 despite nearly going the distance come World Championship time. This was partially due to a clash in play-style and synergy between the members, eventually leading to a player swap following the OGN Winter season. Dade would head to Samsung Blue, while PawN would head to the roster of the eventual world champions, Samsung Ozone (later to become White). Although veteran player Bae “dade” Eo-Jin would be “confused” and “frustrated” with the swap at first, the rational behind the move would become clear once time would progress.

The young Blue roster would receive a veteran talent who embraced strategical play focusing on the macro game, while PawN, a SoloQ success and young player would bring a breath of fresh air and a new champion pool to the team that would finish second to SKT in the OGN split following the Season 3 world championship. This turn of events would lead to Samsung Blue taking first place in the following split of OGN Champions (Spring) with a 3-1 victory over Najin White Shield. This player swap impacted the sibling teams in multiple ways: causing strategy to be shared, potential to be recognized, and creating opportunities for the young members of Samsung Blue to grow into top players in the region.

The organization behind the Samsung teams taught the players how to play the game correctly as the metas shifted. Samsung Blue, especially, would adapt incredibly quickly to the changes in metagames. This is part of the reason Blue would find more success in OGN champions during the Spring and Summer splits: Blue could find victory quickly after the release of a patch, however Samsung Ozone (renamed to Samsung White after Blue’s OGN Spring victory) would be able to identify a strong play-style over time. The ability to adapt, recognize in-game opportunities, and laning strength were bred into players in the Samsung organization. While the staff that nourished these teams into their success faded alongside the players after 2014, there are visible characteristics that remained into the modern Samsung roster. 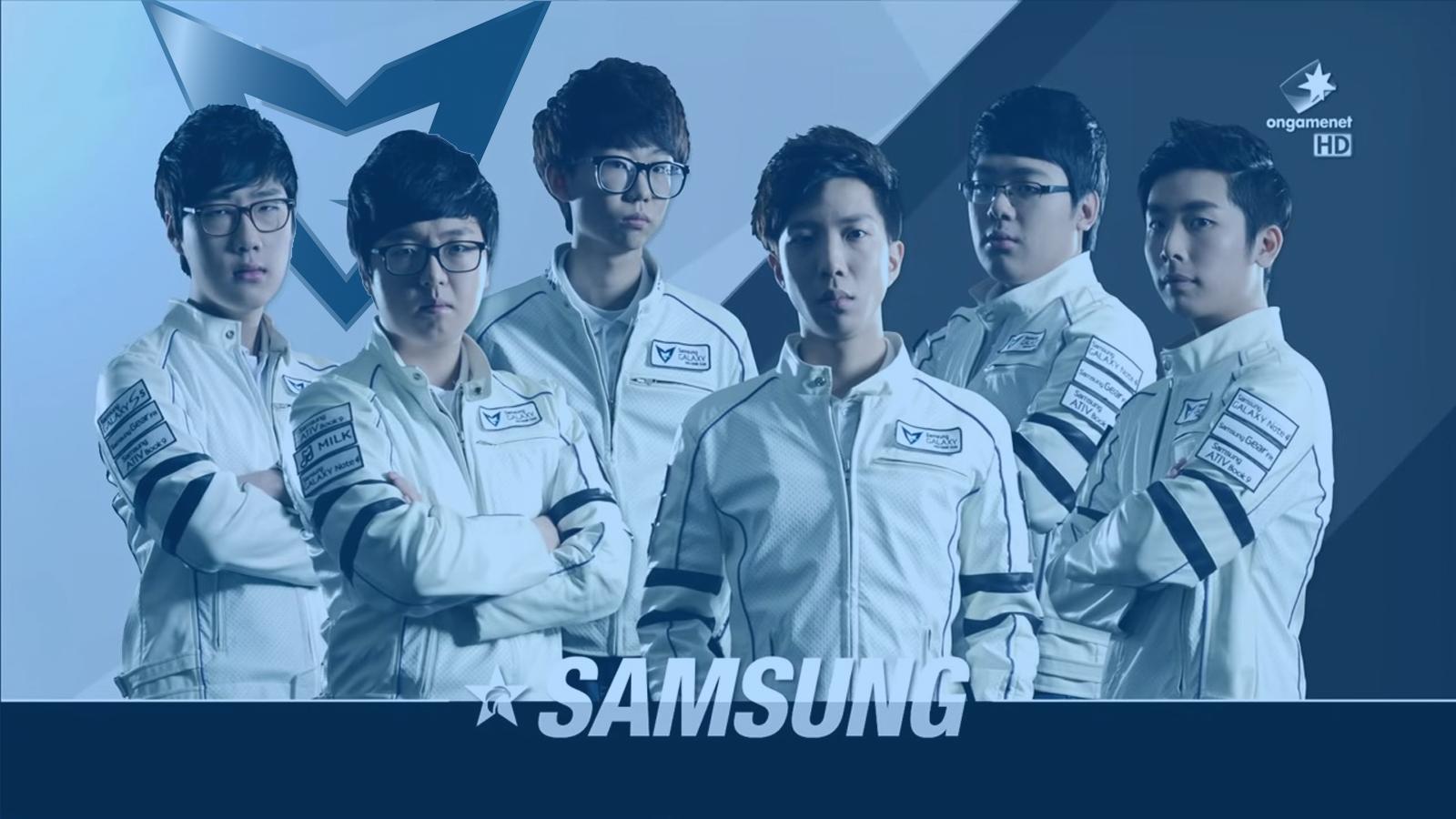 Expectations would be set low for Samsung in the 2015 season, and rightfully so. The team’s new roster would be a combination of players found with SoloQ success to players with limited professional experience such as Wraith (previously of SK Telecom and Jin Air). The team would also sign a new coaching staff, consisting of Choi “DoGGi” Woo-beom and Lee “Horang2” Kyeong-min. Clearly a group of rookies couldn’t be held to the standards of strategical teams such as Samsung Blue, however they could be molded into a team that can execute in-game strategy and adapt to external change.

The return of OGN would be difficult for a Samsung team filled with fresh faces, as OGN Spring would see the team finish in last place with a record of 2-12: only taking sets off of Incredible Miracle and NaJin em-Fire in the later segment of the 12 week period.

Gameplay for Samsung would usually revolve around toplaner CuVee and marksman Fury. The player’s strengths were clear despite their poor record, and the players’ individual skill was easily recognizable. The position of the 2015 Samsung roster can be comparable to the early Samsung Blue roster of 2013 and early 2014. Players such as Spirit and Deft would make their professional debut with Blue, and it would take nearly a year for them to rise from the bottom of the OGN Champions standings. These players, once in the same position as the new additions to the Samsung roster, are now considered to be some of the best players in their positions in the world. Players take time to grow and evolve, and the Samsung organization recognized this opportunity with the collapse of their former roster. Why not start from scratch and rebuild a contender from scratch?

The beginning of the Champions Spring season would see Samsung begin to take a different approach towards competitive matches. The addition of midlaner Crown and support Luna could theoretically push internal competition and add an extra element of depth to the team, creating options for the team in the future. Samsung’s coaching staff would also appear to have stepped up their game entering the Spring split as the team would begin executing strategies that could allow the team to control the map using cross map ultimates or compositions using heavy crowd control.

Week 2 of Champions Spring would see Samsung use a cross-map pick composition centered around Twisted Fate, Rek’Sai, and Bard to catch out enemy champions and to generate an easy lead. Executed beautifully, Samsung would take a game off of the KOO Tigers: the team that finished in first place heading into the bracket stage of the previous split. Nearly taking a set off of Jin Air in the following week, it would become clear that the Samsung team could use their individual strengths and peculiar champion pools to generate leads: they simply had trouble turning early leads into a victory versus some of the top teams in Korea.

The strategic issues of the current Samsung roster require time and coaching. However, their ability to periodically execute compositions with specific goals gives fans a sneak preview of what could be the future of the once world champion team.

Samsung’s current phase could be easily compared the pre-dade Samsung Blue roster. Both teams clearly had talented players, but the Blue roster needed to reach a topping point in order to blossom into the top team that they would eventually become around the Summer season of Champions in 2014. Was it simply dade’s in-game strengths that the team needed to finally take off, or was it the experience and shot-calling ability that the team needed to win games?

In fact, in an interview with Frank Fields of lolesports and Alex Manisier of Team Liquid, dade attributed a lot of the team’s success to his shotcalling. This situation can demonstrate that having strong individual players cannot create success for Korean teams, but rather requires just as much strategic game knowledge as mechanical prowess. The player swap of dade for PawN gave Blue exactly what they needed.

This same situation can be seen with Europe’s “superteam” Elements and their failures in the 2015 EU LCS Spring split. Despite having top Danish players Henrik “Froggen” Hansen and Martin “Rekkles” Larsson in their lineup, the team would often drop numerous games due to poor late game decision making. Both Froggen and Rekkles had already had multiple past successes with other teams before joining Elements, however the current roster of the team could not win games consistently.

The current Samsung team has demonstrated their ability to generate leads and periodically execute team compositions flawlessly. However, their macro game strategy, in-game item builds, and flexibility in game is currently not up to par with the current competition. Samsung now needs what Samsung Blue received one year ago through dade. They need to increase their in-game structure and depth to finally hit the tipping point towards greatness. Just like their predecessors, their individual play is fine: it is the strategical shortcomings of the roster that separates them from the competition.

Could this Samsung team consisting of young prospects develop into a top Korean team such as their predecessors over time? The team’s improvement since their initial games in Champions has been apparent.

With improved shotcalling, in-game flexibility, and individual development, how far away is the new Samsung roster from once again becoming a world class team?