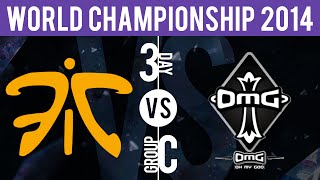 Unless you spent the Day under a rock, you’ve probably read a dozen articles about Fnatic vs OMG. Already billed as the closest game in League of Legends history, Fnatic and OMG duked it out for a whopping 71 minutes before a Gogoing flank caught a 4 man Fnatic squad off guard, leading a 5-0 Ace and a victory for OMG. At one point, Fnatic was a single hit on the nexus away from all but eliminating OMG from the Tournament, with Soaz dying right before the final blow could be struck. The sequence of events began when xPeke managed to fend off OMG 1v5 as his teammates revived behind him. With OMG backing out of Fnatic’s base, Soaz spawns and immediately teleports top lane in a desperate attempt to backdoor OMG’s base. Now let’s freeze the game here. Fnatic has been slowly losing control over the past 15 minutes, having lost back to back team fights, and been unable to contest barons in the face of OMG’s overwhelming scaling. The only thing keeping them in the game is OMG’s lack of understanding of how to close out the game. With a monstrously fed Ryze looming, Fnatic’s chances of winning the game are plummetting. Meaning it’s time for something drastic. The desperation backdoor.

Jumping back into that moment, we’ll see a few times where Fnatic would have won if a different decision had been made. The stand out moment here is when Soaz is above the the Nexus trying to get away from Loveling when he chooses to turn completely around and fire a harpoon at Loveling rather than attack the nexus. This would prove fatal as Soaz would die before getting off any more attacks. If Soaz had chosen to attack the Nexus at that moment, that would have given Fnatic the damage on the nexus needed for xPeke and Cyanide to finish it off a short time later. Instead, he dies, and then a short while later, a Ryze rune prison forces Cyanide into attacking a minion, again barely saving OMG’s base.

Now, No team wants to be in a position where their only path to victory is a desperation backdoor. It requires just the right amount of slight of hand, some poor warding or positioning on the part of the enemy, and more than a little luck. You only go for it if it’s truly the only way you have left to win. So if it’s a desperation maneuver, than why don’t teams ever fully commit to it? What I’m about to suggest takes a lot of guts. If a team made the decision to do it, and then lost, they would become a laughing stock of the community, and their shotcaller would be eviscerated. But if they succeeded, it would go down in history as one of the ballsiest plays ever made. I am of course talking about a player selling their items, and buying AD/Attack Speed, or at the very least, a Lich Bane, and committing fully to the decision to go for the desperation back door. It sounds crazy, and it is. But think about it. If Soaz sells Liandry’s Torment/chain vest for a Lich Bane, we’re talking about how Fnatic held on for the win. Soaz spent 14 seconds attacking the Nexus, enough time for 4-5 procs of lich bane at roughly +325 damage each. Considering that the nexus was just a single hit away from dying, it’s pretty clear that a last second change in itemization would have been a game-changer.

The counter-argument to all this is what happens if the desperation back door fails. You now have a Champion with terrible itemization that has to again sell his items and rebuy. After two rounds of selling, a player’s gold has been cut in half. So you’ve essentially lost the game if the desperation back door fails. But if you attempted the back door in the first place, it probably means you were going to lose anyway. What I’d like to see is teams fully committing to their choices. If they’re going to go for that desperation baron, they need to make sure that player is maximizing his damage output on structures. Going Lich Bane in this situation would have been a nice balance between sacrificing the entire game for that one decision, and being too safe.

From failed back doors, to the 4 man group up the middle without vision on either side, Fnatic has a lot to think about heading into a crucial game against Samsung Blue. While it’s very unlikely that we’ll see another game like this one the rest of the Tournament, if we do, I wonder if a team will have the guts to go all in.